There’s an anniversary upon us and it’s going to be accompanied by quite a glittery celebration. Too Faced is celebrating 20 years of makeup dominance. The brand encourages customers to own their pretty and creates some seriously amazing products — from the best-selling Better Than Sex Mascara, which takes lashes to orgasmic levels, to their chocolate-scented blushes. Brand founder Jerrod Blandino teased the Too Faced 20th anniversary products with a clip of a hot pink, glittery lipstick in a super sparkly, pink and gold tube. It features the old school Too Faced look.

It’s like stepping into a Too Faced time warp. It looks like a product from posterity that was pulled from the company archives.

The lippie is the hottest pink you have ever seen, with plenty of glitz and glimmer. It is a very ’90s shade and texture, but it has a modern flair, as well. The "vintage," punk rock, and scrawled logo and the classic packaging from long ago are a true collision of the past and the present for the brand.

Blandino labeled the pic a "sneaky peek," just like he always does. He is famous for using his personal Insta to generously share upcoming Too Faced launches with makeup lovers.

This isn’t just a TBT pic, as one might assume, since the lippie does look like a relic from a long-gone era. Since Blandino called it a sneaky peek, it appears to be a hint of what’s to come.

If there is anyone who understands the value of a well-crafted tease, it’s Blandino. He shares just enough to get us excited but still leaves us wanting more. That’s not easy to do. So many brands do the black and white filter to obscure what they are working on or their teases are so vague you have no idea what they are creating. Blandino is so adept at satisfying all of your makeup desires while sharing bits of info.

Fans were quick to respond to the shade in the comments, with some saying it’s totally Gwen Stefani circa No Doubt’s late ’90s heyday. Many were overwhelmed — in a good way— by nostalgia for the early years of the brand. Of course lots of Too Facers were pledging to purchase. 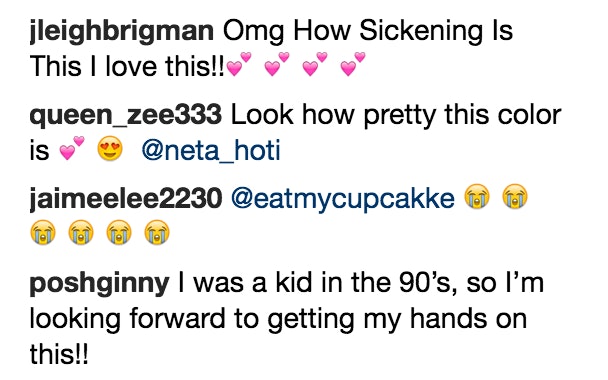 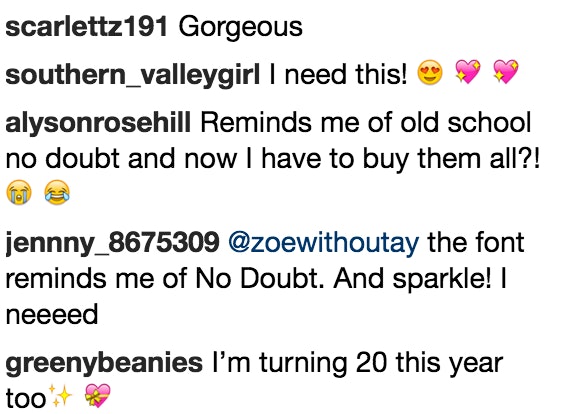 Too Facers are here for it.

Here’s what the shade looks like on an actual pair of lips. That sparkle, though! It’s like melted diamonds or disco ball lips. It’s dramatic AF. This pink is the sort of shade that would look amazing on Kandee Johnson, who launched her own Too Faced collection last year.

Blandino also tagged the lippie as #TF20, so the brand clearly has some pretty awesome plans to celebrate its anniversary. It may be their birthday but fans will reap the benefits with stunning products. Hopefully, there are lots of throwbacks and resurrections of classic, long-retired shades or products for a limited time. It’s always good to revisit the past when celebrating a major makeup milestone such as this. There are so many past products that deserve a comeback.

Blandino posted a shot of the brand’s original metallic lippies from back in the day. Fans lost it when he shared those classics and they are loving the old-but-new hot pink lippie.

Happy anniversary, Too Faced. Your good-girl-gone-naughty aesthetic and top notch products have excited for another two decades of makeup mastery.