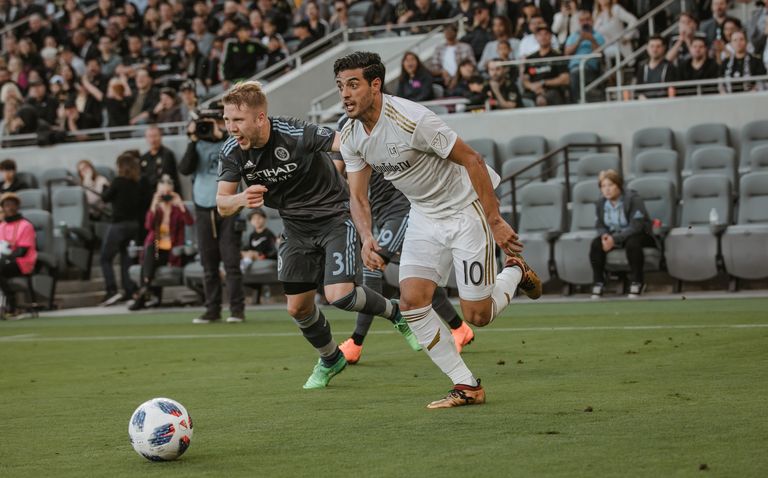 This week, one of the biggest sporting and cultural events in the world kicks off in Russia: The 2018 FIFA World Cup.

The top soccer (football, if you’re just about anywhere other than the USA, who missed the cut this year) players on the planet will gather to compete for international bragging rights. The players represent the best of the best in their sport, and since the tournament is only held every four years, achieving peak performance levels ahead of the competition is of the utmost importance.

“When we build these guys up for the World Cup, it’s not a two-week program,” he told Menshealth.com. “When they come in January and start the season [in March], we forecast that six months ahead of time. We’re really preparing to send them out strong, in good condition and make sure they’re healthy for that national team, so that they have success there.”

Guzman on the sidelines at an LAFC match.
LAFC

To prep for the something like the World Cup, it’s important to remember the specific demands on the sport. A soccer player’s legs are his motor. The last time the event was held, in 2014, the Washington Post estimated an average competitor ran over six miles per match — and mixed in with those miles are extreme bursts of speed to make plays on the ball. If a player isn’t able to count on their strong legs for both the long haul and those quick explosive plays for any reason, it’ll be game over quickly.

With that in mind, Guzman and the rest of the LAFC training staff have built up players’ leg strength and endurance all season long, en route to the World Cup.

Guzman broke down several leg-heavy drills that he regularly used to get the four World Cup-bound LAFC players in peak condition.

If you’re trying to get in shape for some soccer action of your own — or if you just want a taste of what it takes to be a World Cup competitor — give some of these exercises a shot. Your legs will thank you for it.

One of the ways Guzman trains his players for speed and endurance is with a simple sideline-to-sideline run. Each rep should be performed at 80 to 85 percent speed, maintaining a pace for which they can finish each of the four to eight reps within 15 seconds.

“It’s not that they’re accelerating as fast as they can and going 100 percent,” Guzman said. “They’re building up to that 80 percent — coming across, turning around and bringing it back.”

The drill is purposely done at 80 to 85 percent speed because soccer players rarely sprint at 100 percent speed during a match. They have to maintain a constant pace — then pick the right moments to turn on the turbo jets and really sprint. “Very simple, but extremely effective,” Guzman said of the drill.

If you don’t have a pitch handy, official FIFA guidelines stipulate that fields should be 70 to 80 yards (64 to 73 meters) wide. Run that far at 80 percent speed, then turn around and run back. Repeat for four to eight reps.

In soccer, each goalkeeper is housed within an 18-yard rectangular box. Guzman incorporates this into a running drill because it’s so true to life in game-time sequences.

“We’ll have the players run from one box to the other box, where once again they’re going to build up into a higher speed run and they’re going to hold that,” he said. “Once they cross that box, they’ll jog the end line, which is 18 yards, they’ll turn around, jog back and as soon as they hit the box, they’re going back across the field.”

Guzman added that he looks for players to do one rep in somewhere between eight to 12 seconds.

For those without a marked field, box-to-box distance is between 92-102 yards (FIFA regulated pitches are 110–120 yards long). Run that far, jog for 18 yards to simulate the box run, then run back. Repeat for four to eight reps.

Marco Ureña (Costa Rica) in a match for LAFC.
LAFC

While the 15-second sideline-to-sideline and box-to-box drills are the longest high-speed runs LAFC uses for in-season training, early season conditioning comes via this six-cone shuffle-to-sprint box drill. The drill has Guzman set up three cones in a line, each five yards apart and another three cones running parallel also five yards apart. Players then must alternate between shuffling and sprinting in a zig-zag motion between the cones.

“You have a total of six cones. We’ll have the players shuffle left five yards to the other box. When they get to the other box, they’re going to cross over and sprint to the box that’s opposite to them and diagonal to the corner,” Guzman explains. “When they end up at the opposite corner, they’ll jog back and they’ll start from the other side. When they jog back to the side, that’s one rep.” Guzman challenges his players to hit six reps in a minute.

How does this correlate to the field? Players constantly have to stop on the dime, pivot and change directions — just like they have to when they traverse the cones.

Split Squats with Kettlebells or Dumbbells

Throughout the course of a 90-minute World Cup match, players move around the pitch in all kinds of directional and unilateral movements. Guzman said split squats in the gym help prepare players to mimic some of the sequences they’re going to see on the field. To add to that simulation, he’ll have players holding a kettlebell right-side up or upside down in a goblet hold at the chest, while doing the split squats.

Guzman recommended trying the exercise for three sets with five reps on each leg, working up to a point where they can carry 50 percent of their body weight in your hands. “In general, these are strengthening the guys’ legs for the movement that they’re put in,” Guzman said. “If you were break down these guys’ movements from going from a jog into a sprint, you’ll see a single-leg knee-dominant movement all the time. Guys are being exposed to have to use those positions to accelerate for five to 10 yards or have a high-speed run over 40 or 50 yards, so that’s where those movements correlate.”

Reverse Lunges with Kettlebells or Dumbbells

While the rear leg is at rest during a split squat, its engaged on a reverse lunge. That gives players a chance to experience a different unilateral movement — one that they’re also bound to be contorted to while in competition. “It has a lot of transferring in what they do,” Guzman says about the exercise directly correlating to the field. Again, Guzman recommends doing these for three sets with five reps on each leg, while carrying 50 percent of your body weight.

While split squats and reverse lunges help players prepare for unilateral knee-dominant movements on the field, Guzman said single-leg RDLs produce “a hip-dominant movement” that players also experience as they shift their weight and change directions.

LAFC players train for the movement by doing cable single-leg RDLs using the Keiser Air pneumatic system or kettlebells. If you don’t have access to one of those fancy rigs, try using light dumbbells or kettlebells to start. Using kettlebells instead of a cable helps players hone their strength and stability, according to Guzman.

Farmer’s Carries with Kettlebells or Dumbbells

Players are constantly lobbying for position on the ball on the pitch. That brings tackling, and players hitting the ground all over the field. Guzman has players lug kettlebells or dumbbells at 50 percent of their body weight for farmer’s carries to improve balance and core strength. “It improves their strength, their stability and grip strength, which we could use for conditioning as well,” he said. “We see it when they’re getting pushed off the ball or they have to land after being hit in the air. All this kind of stuff comes into play.”

Gaber and Egypt start the World Cup against Uruguay on Friday at 8 a.m. EST on Fox Sports 1.

Ureña and Costa Rica face Serbia on Sunday at 8 a.m. EST on Fox.

Vela and Mexico meet Germany on Sunday at 11 a.m. EST on FS1.

Ciman and Belgium play Panama on Monday at 8 a.m. EST on FS1.