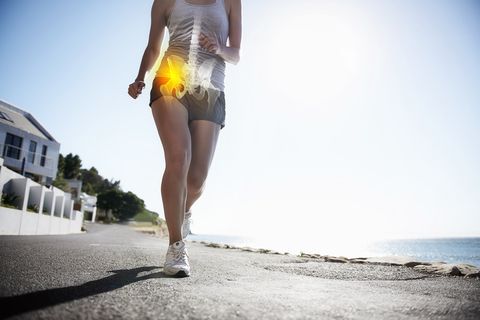 Nothing makes you feel like you’re approximately 97 years old more than thinking, “God damn, my hips are killing me!”—am I right?

But that tight, pinching sensation where the top of your thighs meet your hips is definitely not just a nonagenarian thing.

If your hips are killing you, you probably spend a lot of time sitting—in the car, at work, on that SoulCycle seat—which puts your hips in near-constant “flexion”, says Cori Lefkowith, NASM-certified personal trainer and owner of Redefining Strength in Orange County, California. Even running involves a repetitive flexion movement that can cause pain.

Keeping your hips in flexion pretty much all the time causes your hip flexors (you know, the muscles that stabilize the joint and allow your body to hinge) to become “overactive”—which is basically a fancy way of saying tight AF.

And that’s probably what’s causing your hip pain, and maybe even your lower back or knee pain. It could also be the reason why your hips hurt more than your abs during your core workouts. Annoying, right?

How can you tell if your hip flexors are overactive?

The most obvious sign: hip pain. But yeah, tight hip flexors can also cause lower back pain.

“There are two main hip flexors: the psoas and the iliacus,” says Lefkowith. “The psoas connects into your spine, so if that hip flexor muscle gets shortened, it’s sort of pulling the hip towards the spine and the spine towards the hip.” Ouch?

This also interferes with abs exercises, she explains. Tight hip flexors throw off your alignment, and as a result, your hips end up doing more work than they’re supposed to when you do, say, situps or leg lowers.

Shortened hip flexors also overstretch the glutes and hamstrings, explains Lefkowith. This makes the glutes and hammies harder to activate when you want them to, whether you’re going for a run or doing squats. Plus, when you run the front side of your body will be working harder than the back side, causing tons of stress on your knees.

How can you prevent hip flexor pain?

The first thing you can do to prevent hip flexor issues when you’re working out is to focus on the mind-muscle connection, says Lefkowith. “A lot of time, we push through pain and let muscles compensate without being aware of what muscles are supposed to be working,” she says.

So if you’re doing abs exercises and you feel like your hip flexors are putting in more work, refocus and dial in on the muscles you’re trying to target. It might sound trite to just “think” about a muscle working as you’re doing an exercise (for example, thinking about your abs contracting as you do a situp), but it might actually prevent you from mindlessly grinding out reps with poor form.

The second key is to do some prep work before diving into a workout, says Lefkowith. She takes a three-step approach: foam rolling, dynamic stretching, and activation exercises for other muscle groups.

Foam rolling overactive hip flexors with a roller or a lacrosse ball before a workout can help chill them out. “Foam rolling helps relax and release the muscle and it can help inhibit muscles that might be overactive,” Lefkowith explains. She notes that instead of just rolling quickly, hold still and breathe into any tight areas you come across.

Stretching is your next move, but not just any stretches. “Before your workout, you want to go for dynamic stretches, or stretches that put the joint through a full range of motion,” says Lefkowith. Moves like squats and lunges will get your muscles fired up (especially if you focus on squeezing your butt at the top of those squats), says Lefkowith.

What are the best exercises for hip flexor pain?

The best exercises for hip flexor pain are really more geared towards getting the muscles you want to work engaged:

A basic bodyweight glute bridge is one of Lefkowith’s favorites. Want to try it? Lie on the ground with your knees bent and your feet flat on the floor, and push your hips up toward the sky, squeezing your glutes at the top. This will not only help get your glutes in the game, but it also gives your hip flexors a chance to stretch out. (Try these five hip openers, too.)

You can also give your hip flexors some love when you’re not working out. “Just do some glute squeezes when you’re standing around,” says Lefkowith.

Ultimately, just giving your hip flexors a break from all that flexion can make a big difference, too. “The more you can move throughout the day, the better off you’re going to be,” says Lefkowith. “Get up, move around, take a doorway stretch, do whatever you can.” (In fact, that’s just good advice in general.)