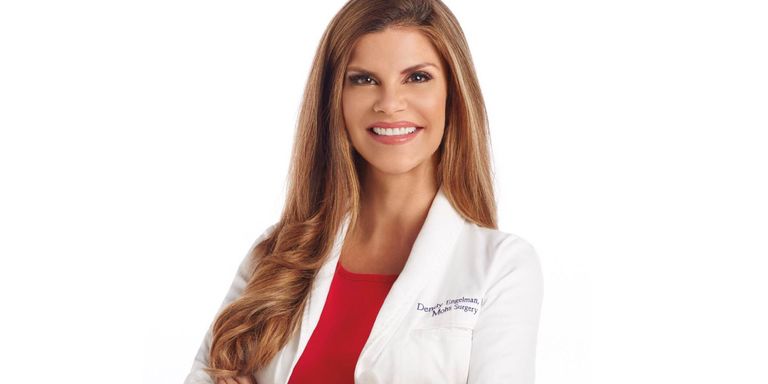 Being pregnant is cool and all, but yeah: “No coffee, no sushi, no deli meat, no alcohol. And then they’re taking away your beauty products!” says Dendy Engelman, M.D., a New York City-based dermatologic surgeon and mom of two.

Yep: A lot of beauty products and treatments aren’t safe for pregnant or breastfeeding women. Among the obvious list of no-nos: neurotoxins like Botox (which can cause paralysis in babies), any form of retinol or vitamin A (which can cause fetal deformities in high doses), and hydroquinone (a skin lightener used for hyperpigmentation).

Engelman with her daughter in 2018.
Courtesy of Dendy Engelman, M.D.

Not even all drugstore stuff is safe, Engelman says. Two major ingredients to avoid: salicylic acid and benzoyl peroxide—which are in basically every acne-fighting product.

Check out how Engleman changed her skincare routine while she was pregnant last year with her daughter, Ellis:

Engelman started off her day with a gentle micellar water cleanser. “There’s always a question of, do you need to wash in the morning?,” she says. “But I like products, and I use a lot of them. So I just want to remove what was on from the night before in order to start my regimen for the day.”

Then she’d use a vitamin C serum, which she says are safe—and how she warded off pregnancy hyperpigmentation without using hydroquinone. Then she’d layer on a hyaluronic acid serum for hydration and plumpness.

On her body, Engelman says she “lived” in Bio-Oil, a nutrient-packed oil used to strengthen the skin and prevent stretch marks. “Even though it’s a pain every day to slather on this stuff, it really does help,” she said (she’s never gotten a stretch mark during either of her pregnancies).

Last step, always: a mineral sunscreen. “Physical blockers (like titanium dioxide and zinc oxide) are so much more effective than chemical sunscreens,” says Engelman. “I do skin-cancer surgeries and that’s something I tout all day long.” (Both options are safe for baby.)

“I double-cleanse at night because I wear a lot of makeup,” Engelman says. She used an oil to dissolve makeup and grime, followed by a foaming cleanser to gently wash her face.

Most of her go-to night products were off the table during her pregnancy (including all retinol creams as well as her favorite toner, Biologique P50, which has salicylic acid). Instead, Engelman would finish with a thicker moisturizer, or the Barrier Restore Serum and Micro Nutrient Hydro Mask from natural beauty line Marie Veronique. “They’re safe and clean,” Engelman says—making them a great alternative to keep her skin youthful and hydrated.

A few times a week

To keep her skin bright and exfoliated, Engelman used a glycolic acid peel pad two to three times a week on her face and chest. (Bonus: Glycolic acid is effective against acne, and one of the few anti-acne OTC ingredients safe for pregnancy.)

In addition to the at-home glycolic acid treatments, Engelman says she’d get in-office glycolic peels on her chest for more intense brightening and exfoliation. “I don’t tend to do them as much when I’m not pregnant,” she says, “I just felt like I wanted to do something because I didn’t have the retinol.”

Lasers, which are often used to treat hyperpigmentation, acne scars, and fine lines and wrinkles, are actually safe during pregnancy—with one catch.

Engelman says that during her pregnancy, she got two IPL laser treatments and one Fraxel laser treatment the month before her son was born in December. Both of these treatments are generally used to even out skin pigment and treat wrinkles and fine lines.

She also didn’t get any fillers (and no Botox), although she does stress that ones with hyaluronic acid or sugar are perfectly safe during pregnancy. “You don’t really need it, though,” she says, because pregnancy hormones and weight gain will naturally make your face and lips plumper.

At home, “I did a lot of sheet masks and under-eye masks,” Engelman says. “I really like masks because they make you stop and be slow.” Anything that lets moms-to-be feel relaxed and pampered is a plus in her book.