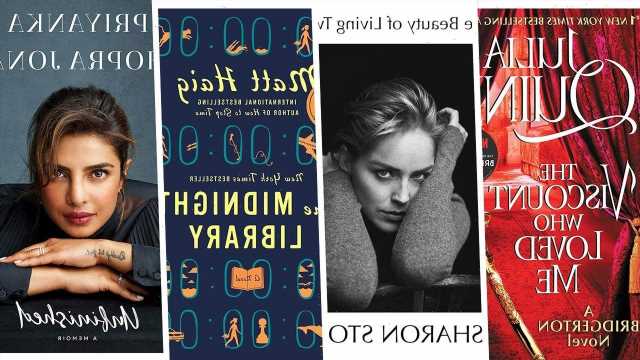 Each product has been independently selected by our editorial team. We may receive commissions from some links to products on this page. Promotions are subject to availability and retailer terms.

Can’t find anything to watch on TV? Tired of aimlessly surfing the channels? Streamed everything under the sun on Netflix? It’s time to pick up an old-fashioned book!

From celebrity memoirs to light beach reads to beloved novels being brought to life for the big (and small) screen, there’s a book for everyone to curl up with by a cozy fireplace after a long day working from home or to get engrossed in for hours on end during a socially-distanced solo day out at the park on the weekend.

So if you’re looking for more books to read or fall in love with, scroll down to shop ET’s April picks below.

Chopra Jonas gets candid in her debut memoir, Unfinished, where she opens up about her childhood in India; overcoming racism, bullying and sexism; needing corrective surgery for a botched nose job; and her marriage to Nick Jonas. She even dives into how her late father would’ve felt about her relationship. The 38-year-old actress admitted to ET she was “terrified” with the idea of opening up about her life in a book: “I did not expect to be scratching beneath the surface as much as I did.” 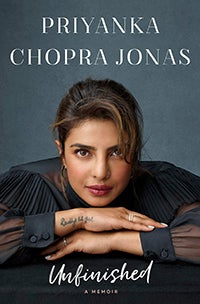 The Beauty of Living Twice by Sharon Stone

The 63-year-old actress doesn’t hold back in her latest memoir, The Beauty of Living Twice, where she openly addresses the physical abuse she says she endured as a child, her debilitating stroke in 2001, unknowingly undergoing breast implant surgery, temporarily losing custody of her eldest son and claims she was misled about the infamous Basic Instinct scene. In an interview with Oprah Winfrey, Stone admits she lost her “radiance” after suffering her stroke. “It’s a radiance and a magnetism and I think that it comes from confidence too. When you’re in this kind of business that we’re in, they start telling you that you don’t have it anymore, and you start believing it.” 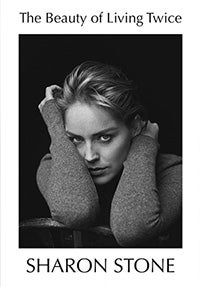 The six-time GRAMMY winner chronicles her life in Broken Horses, from her start at a local singing competition to the experiences as an openly gay teenager that shaped her. The memoir also details her rise to success, including her first break as an opening act for Dave Matthews Band to the present day, all while raising two children with her wife, Catherine Shepherd. 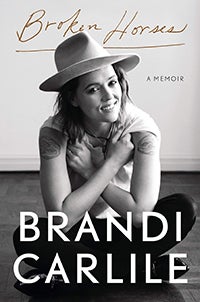 Out May 4. The ER and Good Wife alum reflects on her life and career in Sunshine Girl, from her unconventional upbringing as a daughter of divorced parents, complicated relationships and Hollywood rejections. 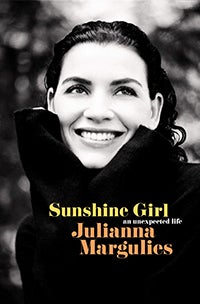 Out May 11. Rogen’s Yearbook is a collection of personal essays where the Pineapple Express and Superbad writer discusses his grandparents, doing stand-up comedy as a teenager, bar mitzvahs, Jewish summer camp, doing drugs and his adventures in Los Angeles. 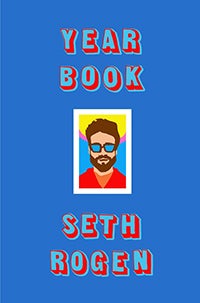 Out May 11. The ’80s Brat Pack star focuses his memoir, Brat: An ’80s Story, on his most formative years as a young Hollywood actor orbiting the same world as then-rising stars Rob Lowe, Molly Ringwald, Emilio Estevez and Demi Moore. McCarthy writes about his time living in New York City in the ’80s, from scoring loose joints in Washington Square Park to skipping school in favor of the movie arthouses of the Village where he fell in love with films that would change his life. 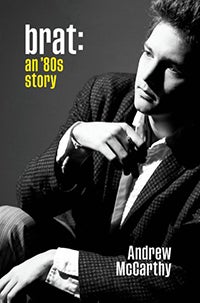 FROM PAGE TO SCREEN

The Viscount Who Loved Me by Julia Quinn

With Bridgerton renewed through season 4 at Netflix, there’s no excuse not to catch up on bestselling author Julia Quinin’s popular romance novels and get a leg up on what’s next for our favorite Regency-era family. Book 2 focuses on the romantic life of the eldest Bridgerton sibling, Anthony, as he embarks on a journey to find a wife. But unbeknownst to him, his life is about to be turned upside down when he crosses paths with the firecracker that is Kate Sheffield. While the Bridgerton series has updated the Sheffields to the Sharma family, there’s no doubt in our minds the new Kate will give Anthony a run for his money. 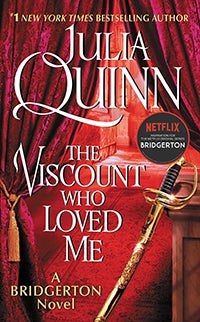 Where the Crawdads Sing by Delia Owens

Normal People‘s Daisy Edgar-Jones stars as Kya in the anticipated movie adaptation of Owens’ bestselling debut novel, which will be executive produced by Reese Witherspoon. Kya raises herself in the marshes after she is abandoned by her family. After her ex-boyfriend is found dead, she becomes the prime suspect in his murder. 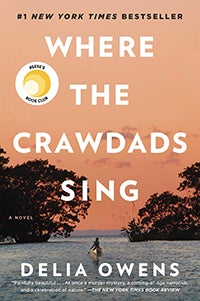 The House of Gucci by Sara Gay Forden

Adam Driver stars as Maurizio Gucci, while Lady Gaga plays his ex-wife Patrizia Reggiani in the upcoming biographical crime movie adaptation of Forden’s 2001 nonfiction book, The House of Gucci.  The film and novel follow the true story of the downfall of the Gucci family and the assassination of Maurizio, the former head of Gucci fashion, that was arranged by Reggiani. The movie is slated for a Nov. 24 release. 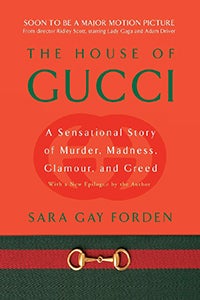 The Woman in the Window by A.J. Finn

Amy Adams plays Dr. Anna Fox, an agoraphobic psychologist who befriends a neighbor across the street from her New York City brownstone, only to see her own life turned upside down when the woman disappears and she suspects foul play. Read the book before the long-awaited psychological thriller, directed by Joe Wright, drops May 14 on Netflix. 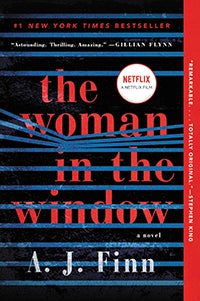 The Midnight Library by Matt Haig

If there was ever a book more appropriate for a quarantine read, it’s Haig’s magical Sliding Doors novel, Midnight Library, which was optioned in September for a potential film adaptation. It follows Nora Seed, a 30-something woman who finds herself at a major crossroads. Faced with the possibility of changing her life for a new one, following a different career, undoing old breakups, realizing her dreams of becoming a glaciologist, she must search within herself as she travels through the Midnight Library to decide what is truly fulfilling in life — and what makes it worth living in the first place. 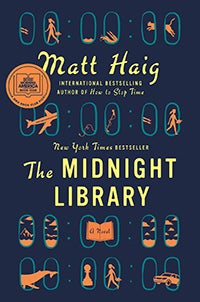 The Hating Game by Sally Thorne

Lucy Hale and Austin Stowell star in the upcoming film adapted from Thorne’s bestselling enemies-to-lovers romance novel, which follows nemeses Lucy Hutton and Joshua Templeman, executive assistants to co-CEOs of a publishing company. Up for the same promotion, the pair embarks on a ruthless game of one-upmanship, a rivalry that is complicated by their growing mutual attraction. (Enjoy The Hating Game? Thorne’s just released novel, Second First Impressions, is also worth a read.) 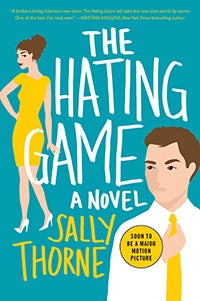 The third book in Hibbert’s bestselling Brown Sisters series, Act Your Age, Eve Brown follows the “flightiest” Brown sister as she tries to grow up and prove herself to her family. Through an act of fate, Eve bumps into bed and breakfast owner Jacob Wayne — or more like breaks her way into his world — and she tries to repay him for breaking his arm following their accident by helping around his understaffed b&b. But as all romances go, their iciness begins to thaw and the heat between them becomes increasingly harder to ignore. 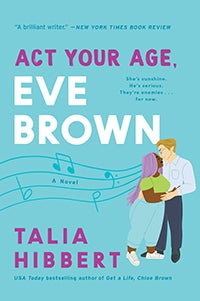 Solomon’s debut novel, The Ex Talk, follows two Seattle public radio hosts, Shay Goldstein and Dominic Yun, whose new show — two exes delivering relationship advice live on air — is one last desperate attempt to save the struggling station. The only problem? They’re not actually exes. While Shay and Dominic feel guilt over lying to their listeners, it’s difficult to ignore their immediate rapport and chemistry on the mic. And as their show rises in popularity, so do Shay and Dominic’s attraction for each other. Yup, it’s about to get messy. 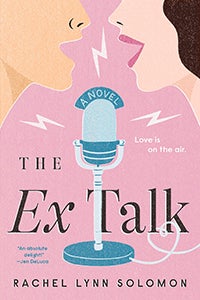 People We Meet on Vacation by Emily Henry

Out May 11. The author behind one of 2020’s best novels, Beach Read, is back with her follow-up romance, People We Meet on Vacation. In this book, Alex and Poppy are best friends who couldn’t be more different, live apart most of the year but vacation together every summer. She’s a child child, he’s more likely to stay home with a book. But an ill-fated final vacation two years ago strains their friendship forever. To make up for lost time, Poppy convinces her BFF to take one more vacation together to make things right. What could go wrong? 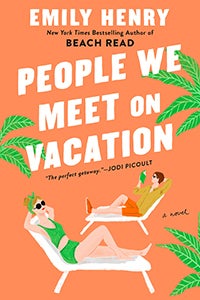 To stay up to date on breaking news, sign up for ET’s daily newsletter.