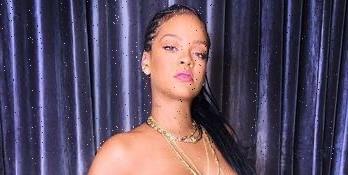 When Rihanna shares a lingerie pic on Instagram, the world stops. And really, fair.

Well, Riri just gifted the TL with several stunning photos and it’s safe to say pretty much everyone is going to want to take a look. The pictures show Rihanna from the front, side, and back, modeling a gorgeous orange lingerie set from her own Savage x Fenty line. The strapless bra is a corset style and the bottoms are a lacy thong—and it’s all accessorized by Rihanna’s super toned body.

“Been 3 mins of thinking of a caption…I ain’t got s**t to say 🥴🧡,” she wrote in the caption. The photos definitely speak for themselves, so all good. People were pretty much falling over themselves in the comments. “Mood🔥🔥🔥🔥🔥🔥,” said Gabriella Lascano. “Stunnerrr 😍,” wrote Hayden Williams.

Of course, Rihanna, 33, works hard for that body, with a 360 approach to exercise and eating well.

Rihanna likes to mix up her workout routine.

Rihanna has used several different trainers to get so fit. One is Jamie Granger, who told The Hollywood Reporter that her famous client does “everything from powerlifting to plyometrics.” Rihanna is also into cycling, hiking, and paddling, she said, adding, “we try to mix it up.”

Dede Lagree, who has also worked with Rihanna, told Livestrong.com that the superstar has used a Supraformer, which is similar to a Pilates reformer. “The Supra is the first fitness machine in the world to do both incline and tilt,” Legree explained. “So the fact that you’re balancing on this resistance-based platform, fighting against the system of springs and pulleys—and your own body weight—and responsible for moving the carriage that inclines up to two feet in the air, you’re basically training for space camp.”

Rihanna’s personal chef Debbie Solomon travels with her (just peep Riri’s Instagrams for proof), and she told Bon Appetit that the singer has certain go-tos. When they travel, Solomon says she brings “every protein that you can think of,” along with vegetables, rice, and pasta. Rihanna is also big on spices, which is why Solomon packs bouillon-like maggi cubes, curry, cumin, Old Bay seasoning, adobo, and five-spice, as well as garlic and onion granules.

According to Solomon, Rihanna loves foods from her upbringing, including Bajan and Guyanese dishes.

Rihanna also makes sure she’s well hydrated. She told Harper’s Bazaar that she aims to drink at least eight glasses of water a day. It doesn’t matter how busy she is or where she’s traveling, either.