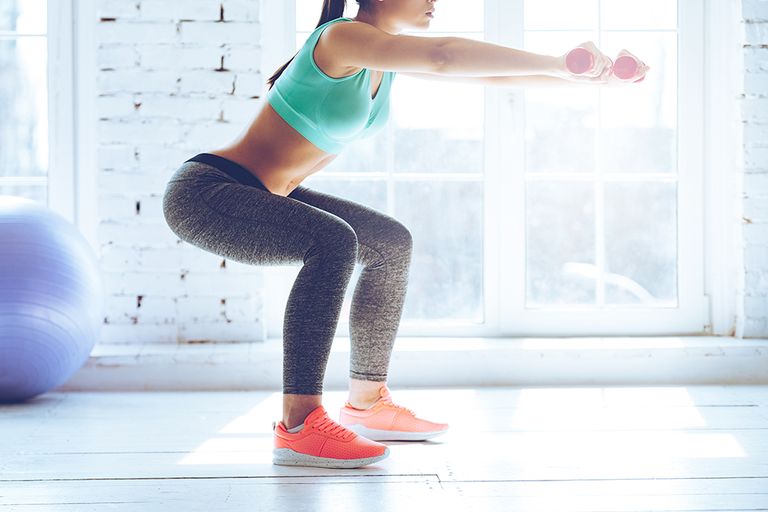 Picking which workout moves to do is kind of like picking out a new pair of high-waisted leggings; it’s pretty hard to go wrong. Most importantly, you’re staying active, and pushing your body to get stronger. That said, when you really break it down to the nitty-gritty, some exercises are just a bit more effective than their very-similar counterparts.

And whether you’re in a time crunch or just want to work your way to results that much faster, finding the most efficient exercises on the block can make all the difference.

So now here’s the real test: Do you think you can determine which moves are better than others? Give it a go! (Don’t worry, we fill you in on trainer-recommended picks, too.)

Answer: If you want to get that metabolism climbing, squat jacks are actually a better bet, New York-based trainer Chris Ryan, C.S.C.S. said in a previous interview. Squat jacks help open up your hips and target your booty, legs, and core more. Which means both revving your metabolism and sculpting a booty—what more could you want? (Get more info about these two heart-racing moves here.)

Answer: In a previous interview with WomensHealthMag.com, Albert Matheny, R.D., C.S.C.S., co-founder of SoHo Strength Lab and advisor to Promix Nutrition recommended v-ups over situps. Why? according to him they’re better for sculpting your stomach, since v-ups target all your abs muscles, including the lower abs and obliques. (Read more, here!)

Answer: “The renegade row and the superman are two of my favorite moves,” Ryan told WomensHealthMag.com. “But when it comes to strengthening your back overall, the superman reigns supreme.” That’s because superman keeps your back under tension the entire time, which works all the muscles at once. Plus it challenges your butt and shoulders, too! (Read more, here!)

Answer: While both lunges are great, and work every party of your leg (including quads, hamstrings, and glutes), Darin Hulslander, C.S.C.S., owner of This Is Performance personal training in Chicago told WomensHealthMag.com, the offset dumbbell lunge comes out just slightly on top. “It wins by a hair because it creates a little more tension in the muscles than the squat jumps do, and that will provide a much larger benefit to your lower body in the long term.” (Read more about both leg- and abs-sculpting moves.)

Answer: Pete McCall, C.S.C.S., a San Diego-based trainer and host of the All About Fitness podcast says both are great, but the winner is the decline pushup. “The decline is better for overall strength development and muscular definition. Because all the weight is loaded onto the lowest point, you’re using more upper-body muscles—specifically the chest, shoulder, and triceps—which helps build strength faster.” (Get more info about both killer pushups.)

Answer: According to Hulslander, you really can’t go wrong with either move. But if he had to pick, you’ll get a bit more out of the reverse and curl lunge, since “The curl directly targets the biceps without receiving any help from other muscles.” (Along with these reasons.)

Answer: While both moves will put those hard-to-reach abs to work, Hulslander told WomensHealthMag.com that the stability ball knee tuck is just slightly more effective, since it activates the lower abs a bit more, while putting less stress on the back. (Here’s how to master both moves.)

Answer: These bicep moves are both solid staples in any routine. But according to Perry, the dumbbell hammer curl to press will really build those muscles. (Here’s some more info on why that’s the case.)

Answer: While plank knee taps may look more challenging, Perry told WomensHealthMag.com that sweeps are actually even better at sculpting those obliques. “Your abs are maximally contracted the entire exercise so they don’t get a break, and you have to resist the weight of your leg being shifted underneath you.” (Check out more about these abs moves.)

Answer: The ultimate question: What’s the quickest way to a plumper peach? In a previous interview, certified personal trainer Kenny Santucci voted for the glute bridge on a bench. Thanks to the elevation and instability of the bench, your glutes, ans, and quads have to work even harder to lift your body.