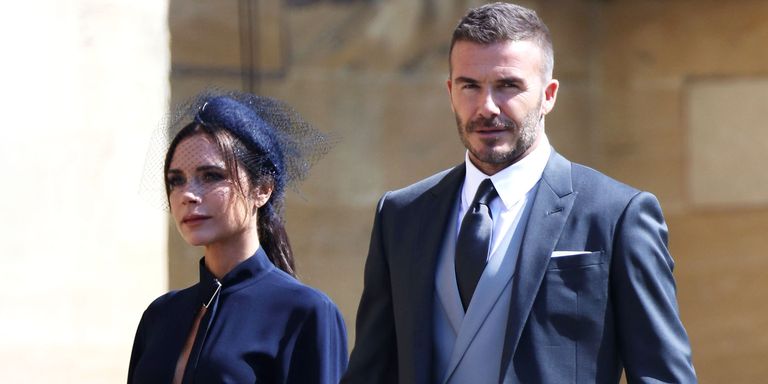 Guests are quickly arriving for the royal wedding of Prince Harry and Meghan Markle, and Victoria Beckham and her husband David just arrived. Beckham was spotted wearing a navy blue dress and sparkly veiled fascinator—a look that was similar to what she wore to the 2011 wedding of William and Kate. But it’s her sporty ponytail that has us swooning over Posh Spice’s look.

Her hair was pulled into a low, glossy ponytail. A section of hair was wrapped around the base of the tail to disguise the elastic. To get a similar style, use a clear elastic so that it’s easier to disguise. The take a small section of hair from the underside of the tail, coat it in hair gel, then wrap the hair around the base several times before popping in a few bobby pins in the same color as your hair. A quick blast of hairspray will prevent the looped hair from unraveling.

Other guests that have already arrived include Oprah Winfrey, Amal Clooney and her husband George, Priyanka Chopra, as well as a pregnant Pippa Middleton. While the ponytail was a little casual for Beckham, other guests wore similar styles. Clooney wore her hair down in loose curls, while Oprah wore a low ponytail as well. Chopra wore her hair in a glossy low chignon. Serena Williams arrived wearing tight braids that flowed into a ponytail, topped with a pale pink fascinator.

Markle hasn’t been spotted yet, though she will make her debut any second. Bets are that she’ll wear her hair in her signature low bun with tendrils, or down and loose in waves.