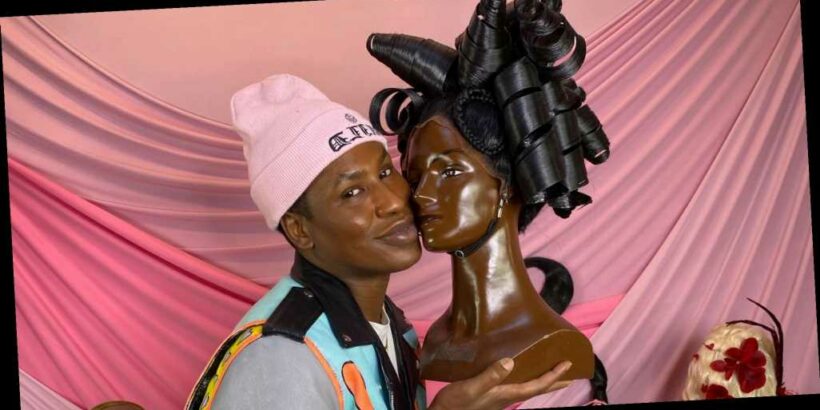 Shea Couleé (neé Jaren Merrell) has been mesmerized by the artistry of hair for as long as she can remember.

Way before she ever even thought of becoming a drag queen, some of her earliest and fondest childhood memories are of Saturday road trips to the salon.

"I was born in this tiny town in Indiana called Warsaw, and there were no Black hair salons there," she tells me over Zoom, as she's perched up on a stool with a few of her favorite wigs behind her. "My mom, my aunt Dianne, and my sisters and my cousins would all load up in the van and drive about an hour to an area called Fort Wayne, Indiana and there was one white lady who did Black hair."

While most young children would grow to be restless and bored while waiting around all day for the appointments to end, Couleé sat there, week after week, and marveled at the transformations happening right before her eyes.

And that's how her love affair began.

At home, the Drag Race star would spend hours going through her parents' record collection, which not only inspired her love for music, but also gave her an appreciation for the evolution of hairstyles from the '60s to the early '90s.

"Diana Ross just epitomized glamour and being able to be a [style] chameleon," Couleé muses. "You do see a lot of those sculptural, '60s references come in with certain hairstyles of mine." Namely, the beehive wigs she wore throughout season five of All Stars.

The 31-year-old was also inspired by women like Naomi Campbell and Grace Jones, both for their trademark looks and penchant for bending the rules without apology, which led Couleé to have no qualms about being expressive through her wigs while in drag.

"The first time I saw [Naomi] was in a Michael Jackson video, the 'In the Closet' video, and she was in this white two-piece and they're out in the desert," Couleé reminisces. "I love someone who has a real signature. That center part, with those long, cascading inches just — I mean … not only was she super duper glamorous, but she was a dark-skinned glamorous woman."

As for Jones, it was her 1992 role as the character Strangé in Boomerang that left a mark on the drag queen.

"Her high top is so iconic, [but] she wore so many types of wigs [in that movie]," says Couleé. "She had a blonde ponytail, she had a Cleopatra moment. I just remember being so intimidated by her, but intrigued at the same time." The influence of these three women, plus Couleé's innate star quality made her a natural performer — even if she was only performing for her family in the living room. Be it a runway show, singing, or acting out a dramatic scene, she was going to put on a performance, honey, whether they were in the mood to watch it or not.

As the youngest of five kids, Couleé describes her childhood self as "eccentric," with a lot of energy and a love for all things make-believe. "My mom would be like, 'Baby, I don't wanna watch you do this show, I've been working all day. We need to get this baby in some plays or something,'" she laughs.

Well, momma kept her word. And by the age of nine — after the family had moved to the Chicago suburb of Plainfield, Illinois — Couleé started taking theater classes. Here, not only was she able to finally thrive on stage, she also found a new sense of belonging outside of her immediate family.

But it wasn't until the performer went off to Columbia College Chicago to study costume design when she could be a part of productions with higher budgets, which meant that hair was finally going to be a part of the equation.

The first time Couleé hit the stage with a wig as a part of her costume it was for a play called Ten Square. "It basically a future dystopian version of Chicago where the city was segregated by north Chicago and south Chicago," she remembers. "Of course, all the Black people were sent to live in south Chicago. It was really dark, and it explored themes we still see in American politics today."

When it came to the hair, the star speaks of the piece fondly. "It was these long dreadlocks and I loved it, it was such a beautiful, ventilated, lace-front wig," she shares. But despite being a natural on stage, Couleé didn't consider drag until she turned 23 — and, believe it or not, it wasn't something she got into on purpose.

During college, the Chicago resident learned how to make her own wigs as a part of her costume design courses, and there was one piece she created that she just couldn't get enough of. She tells me it featured long, straight, jet black hair, Couleé remembers, à la Naomi Campbell.

"I was always wearing it around my apartment, just doing chores," she says. "So a friend of mine was just like, 'Umm, have you watched Ru Paul's Drag Race? I really think you'd do well on that show.'"

At the time, Couleé brushed it off and was unsure if she would make a good drag queen at all (can you imagine?). However, she did decide to get dolled up for Pride that year and wore the wig she had crafted herself, adding bangs for the occasion, which ended up becoming an unintentional test run.

"I lasted for about, maybe an hour in my heels before we had to go back," she laughs. "But that was a fantastic hour. From there on, I just fully fell in love with drag and then went into it full-time." As she quickly became a staple in the Chicago drag scene, then a drag icon, Couleé saw her wig collection grow just as astronomically over the years. It now features pieces made by Wig Chapel, fellow queen Plastique Tiara, as well as master hairstylist friends like Nathan Juergensen. But despite her local prominence, getting on to Drag Race wasn't an easy feat. Couleé auditioned five times before finally being cast for the show's ninth season, which she tells me she was totally OK with. "I am one of those people who, when I have a goal or a dream, it's like an itch," she shares. "I am not going to give up until I feel like I've scratched that itch — it nags at my soul."

Although Couleé didn't win season nine, she didn't come to play when it came to her second chance on All Stars, she came to slay. And that she did, being crowned the winner of the spinoff's fifth season, all by just staying true to herself.

That said, I had to ask about one of her most iconic looks from the show: the unforgettable Afro wig made by Juergensen, paired with a glistening, nude body suit created by costume designers Troy Ford and Michael Brambila.

"The theme for the runway was 'Love the Skin You're In,' and it was nude couture," she remembers. "They had sent a bunch of references and they were all nude red carpet gowns, and I wanted to take the idea of a nude illusion and do a nude illusion."

However, with nude often only translating into a light shade of beige, as a dark-skinned person, Couleé knew she had to flip the script. "I wanted to show my ultimate Nubian goddess coming out of the river Nile, dripping wet in all of her gold."

Of course, she absolutely nailed it.

Drag aside, Couleé has always been an advocate for Black and queer communities, as well as the destigmatization of marijuana use. "It's just that nobody was listening to me [before] because I was just some drag queen in the bar dancing for dollars," she laughs.

But now that she has an enormous platform (1.4 million followers on Instagram alone, so you know, light work), she's using it to turn up the volume on her message — and she could not care less if someone's got a problem with it.

"I remember, they do a background check when you audition for Drag Race and they do a check on your social media. A lot of things that had gotten flagged [for me] were very politically charged tweets," she shares. "I read that paper and was like, 'ya God damn right.'"

Remember, Couleé already told us she isn't here to play — and she means it.