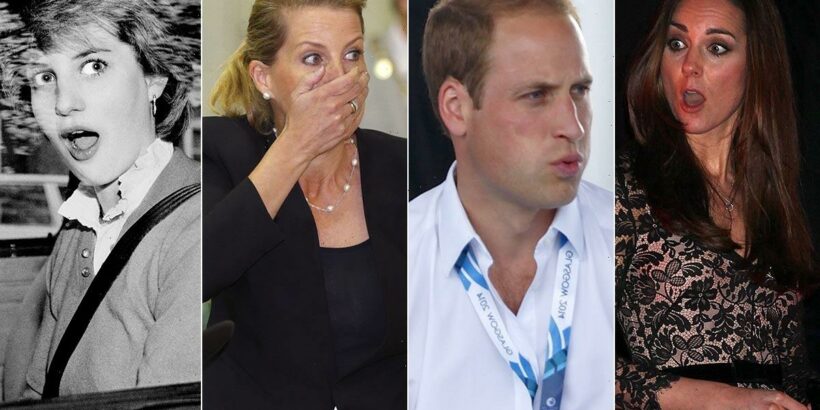 The royals are some of the most well-known figures around the globe, but they haven’t been exempt from the odd scandal or two over the years.

From Prince Andrew‘s retirement from public life to Princess Diana’s tell-all Panorama interview, HELLO! takes a look at some of the most shocking royal events to date, starting with the most recent story about the Queen’s cousin…

In May 2021, it was reported that Prince Michael of Kent was willing to use his royal status for personal profit and to seek favours from Russian president Vladimir Putin.

The Queen’s cousin told undercover reporters posing as investors from South Korea in a virtual meeting that he could be hired for £10,000 a day to make “confidential” representations to Mr Putin’s regime.

Channel 4 Dispatches and The Sunday Times collaborated to set up the fake South Korean gold company called House of Haedong. Prince Michael of Kent responded by showing interest in working with the company, telling undercover reporters that he would give House of Haedong his royal endorsement in a recorded speech for a $200,000 fee and was happy to use his home in Kensington Palace as a backdrop.

Prince Harry and Meghan Markle shocked the world when they announced their decision to step back from royal duties in a statement on their @SussexRoyal Instagram account and a new website in early January 2020.

After talks with the Queen, the Prince of Wales and the Duke of Cambridge in Sandringham, an agreement was reached that the Sussexes would no longer receive public funds and will not use their HRH titles, but that they would keep their patronages and retain Frogmore Cottage as their UK home.

Harry and Meghan now live in Montecito, Santa Barbara with their son Archie and their baby daughter Lilibet.

MORE: 9 times the royals have apologised in public

The Duke of York

The Queen’s second son stepped back from royal duties in November 2019, following his TV interview with BBC Newsnight, which focused on his connections to convicted sex offender Jeffrey Epstein.

Prince Andrew’s statement at the time read: “I have asked Her Majesty if I may step back from public duties for the foreseeable future, and she has given her permission. I continue to unequivocally regret my ill-judged association with Jeffrey Epstein.

“His suicide has left many unanswered questions, particularly for his victims, and I deeply sympathise with everyone who has been affected and wants some form of closure. I can only hope that, in time, they will be able to rebuild their lives. Of course, I am willing to help any appropriate law enforcement agency with their investigations, if required.”

In August 2021, Virginia Giuffre began legal action against Prince Andrew for allegedly sexually assaulting her when she was a teenager.

Lawyers for Ms Giuffre filed the civil suit seeking unspecified damages at a federal court in New York, where the court documents claim she was “lent out for sexual purposes” by Jeffrey Epstein including while she was still a minor under US law.

Prince Andrew has vehemently denied the allegations in the past, and a spokesman for the Duke said there was “no comment” when asked to respond to Ms Giuffre’s legal action.

RELATED: Prince Andrew arrives at Balmoral with Sarah Ferguson amid US civil lawsuit

The Sussexes’ tell-all interview with Oprah Winfrey in March 2021 dropped many bombshells that shocked the world. While the couple shared some heartwarming anecdotes about life in the US with their son Archie, and also revealed that they were expecting a girl in the summer (royals generally tend not to reveal their baby’s gender until after the birth), Harry and Meghan did make some surprising revelations.

MORE: 16 times the royals were taken by surprise

Among them was that the Duchess had felt suicidal during her first pregnancy, that certain members of the royal family had “shown concern” about Archie’s skin colour, that Prince Charles had cut Harry off and that the Firm had refused to pay for Archie’s security costs. Meghan also clarified reports from the time of her wedding, claiming that it was actually her sister-in-law Kate who had made her cry about the bridesmaids’ dresses in the lead-up to the nuptials, and not the other way around.

Following the explosive interview, the Queen released a statement saying: “The whole family is saddened to learn the full extent of how challenging the last few years have been for Harry and Meghan. The issues raised, particularly that of race, are concerning. While some recollections may vary, they are taken very seriously and will be addressed by the family privately. Harry, Meghan and Archie will always be much loved family members.”

The Duchess of Cambridge

The Duke and Duchess of Cambridge were awarded £92,000 in damages in 2017 after French Closer magazine published topless photos of Kate on a private holiday in Provence in 2012. A French court ruled that the paparazzi pictures were an invasion of the couple’s privacy.

A statement from Kensington Palace at the time read: “This incident was a serious breach of privacy, and their Royal Highnesses felt it essential to pursue all legal remedies.

“They wished to make the point strongly that this kind of unjustified intrusion should not happen.”

MORE: So relatable! 17 times the royals slipped up in public

Princess Diana shocked the world when she sat down for an extensive interview with BBC1 Panorama in November 1995, in which she spoke candidly to interviewer Martin Bashir about the breakdown of her marriage to Prince Charles, her battle with bulimia and life behind palace walls.

In May 2021, Lord Dyson’s inquiry into the BBC programme found that Bashir engaged in “deceitful behaviour” to secure the world exclusive, faking bank statements that suggested individuals were being paid to keep the princess under surveillance.

The Queen’s younger sister shocked the nation when her separation from photographer Antony Armstrong-Jones was announced by Kensington Palace in 1976.

While the palace announced at the time that the couple did not plan to divorce, two years later Princess Margaret began legal proceedings to officially end the marriage.

Although attitudes to divorce at the time were changing, a royal divorce was still considered unthinkable and it was the first divorce of a senior member of the British royal family since Princess Victoria Melita of Saxe-Coburg and Gotha’s in 1901.

The monarch triggered a constitutional crisis in 1936 when he proposed to marry American divorcee Wallis Simpson. The Church of England and government ministers opposed divorce at the time and so King Edward VIII chose to abdicate to wed the woman he loved.

He was succeeded by his younger brother George VI – the father of the future Queen Elizabeth.

Edward and Wallis married in France and spent the remainder of their lives in the country.

MORE: The Queen’s life changed forever after this royal death

In January 2020, the former king of Belgium, King Albert II, admitted that he is the father of an illegitimate daughter, born from an affair with Baroness Sybille de Selys Longchamps.

The former monarch had been fighting the paternity claim by artist Delphine Boël for more than a decade.

In October 2020, Delphine was granted the title of Princess of Belgium following a court battle.

The former king, 83, abdicated in 2014 after a number of alleged controversies, including reported extramarital affairs.

In March 2020, Juan Carlos’ son King Felipe renounced any future inheritance from his father due to reported connections to an alleged financial scandal. It was also declared that Juan Carlos would lose his public allowance from the state’s general budget.

King Felipe of Spain’s brother-in-law was sentenced to five years and 10 months in prison in June 2018, following convictions of embezzlement and money laundering in excess of £4.5 million through his non-profit organisation, the Noos Institute.

Iñaki’s wife and King Felipe’s sister Infanta Cristina was also investigated but acquitted of any charges. However, King Felipe issued a decree stripping his sister of the title of Duchess of Palma in 2015.