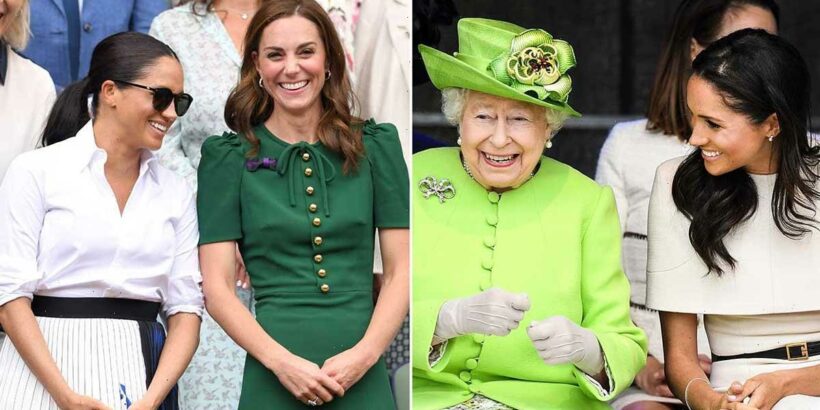 Meghan Markle joined the royal family when she married Prince Harry in May 2018 and in the lead-up to their wedding, we got to see plenty of lovely interactions with her new in-laws.

The future Duchess of Sussex joined Harry and the Duke and Duchess of Cambridge at a forum for the Royal Foundation in February 2018 (above), which saw them dubbed the “Fab Four”. Prior to that we had seen Meghan join the Firm at Sandringham for her first royal Christmas.

Harry and Meghan stepped back from royal duties in March 2020 and now reside in Montecito, Santa Barbara, with their children, Archie and Lilibet.

WATCH: Meghan arrives in Cheshire to carry out first solo engagement with the Queen

There wasn’t a dry eye in the house as Prince Charles accompanied his daughter-in-law Meghan halfway down the aisle on her wedding day to Harry at St George’s Chapel in Windsor in May 2018.

One of Harry and Meghan's first engagements as newlyweds was a Buckingham Palace garden party to mark Prince Charles' forthcoming 70th birthday in 2018. Meghan, Charles and Camilla couldn't contain their giggles as Harry was momentarily distracted by a bee during his speech.

MORE: 14 fabulous photos of the Queen and her family enjoying themselves at royal garden parties

The Duchess embarked on her first ever solo engagement with the Queen to Chester in June 2018. Meghan had her grandmother-in-law in fits of laughter as they watched a performance by local children during a day of engagements.

MORE: 8 pictures which prove the Queen and Meghan Markle have a close bond

Shortly after their May 2018 wedding, Harry and Meghan joined the monarch at the Queen’s Young Leaders Awards Ceremony at Buckingham Palace. The couple were seated next to Her Majesty during the reception.

Meghan attended Royal Ascot for the first time with Harry in June 2018, shortly after their wedding. The couple shared a carriage during the procession with Harry’s uncle and aunt, the Earl and Countess of Wessex.

Meghan and Sophie were in good spirits as they chatted and laughed upon arrival.

MORE: 11 of the royal family’s most memorable moments from Ascot

Another sweet moment between Meghan and her stepmother-in-law Camilla as they chatted on the Buckingham Palace balcony during the flypast to mark the RAF centenary in July 2018.

The Duchess of Sussex enjoyed a girls' day out at Wimbledon in July 2018, as they watched the action from the Royal Box. Tennis fans Kate and Meghan were spotted laughing and smiling together.

Meghan sat next to Prince Harry's aunt Princess Anne at Princess Eugenie and Jack Brooksbank's wedding in October 2018. The pair were captured having a fun chat as they waited for the bride to arrive at St George's Chapel in Windsor.

The Sussexes then caught up with the Queen after Princess Eugenie's wedding ceremony outside the chapel. Days later, the couple announced they were expecting their first child together as they embarked on their royal tour of Australia, Fiji, Tonga and New Zealand.

Meghan and Camilla enjoyed a day out at Royal Ascot in June 2018 and looked delighted to see one another as they arrived at the racecourse.

Harry and Meghan walked to church in Sandringham with William and Kate on Christmas morning in December 2018. The royal women chatted as they made their way to the service.

This sweet moment between Meghan and her father-in-law Charles was captured at the Commonwealth Day service in March 2019. The pair had a good catch-up as they waited for the Queen to arrive. It was one of Meghan's last public engagements before she gave birth to baby Archie in May 2019.

The Duchess joined Kate at Wimbledon 2019, where the pair watched Meghan's BFF Serena Williams. It was one of her first public appearances after welcoming baby Archie.