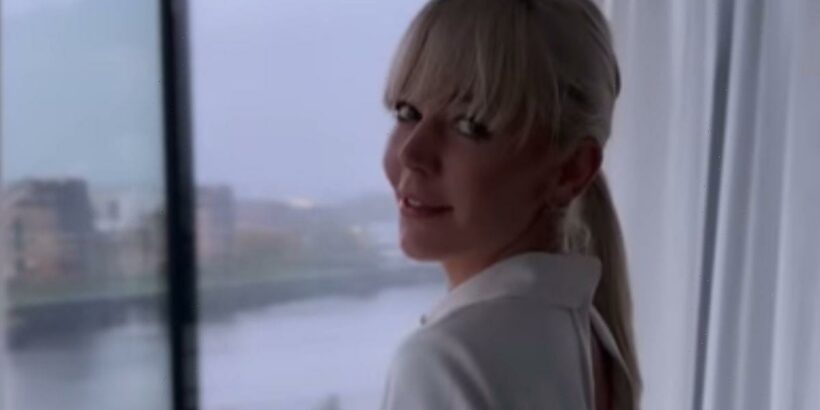 Danni Menzies, 35, shared a video with her thousands of followers, showing her getting ready for the Scottish Influencers Awards earlier this week with her sister Mia, 25. The presenter proudly showcased her newly acquired scar for a moment before letting her fringe down.

The new video shows the sisters dressed in matching bathrobes with the presenter’s hair tied up in a towel and holding a cup of coffee.

Fans were offered their first glimpse of the healing scar from the moped accident.

Just above Danni’s right eyebrow, the scar gently traces its way up her forehead and is still a lively red colour as it heals.

In the next shot, both Danni and Mia swap their bathrobes for their elegant attire to attend the awards show.

They also swap their cups of coffee for glasses of bubbles, and with Danni’s blonde fringe down, the scar all but disappears.

Despite it all, the presenter seemed in high spirits in the video, and jokingly captioned it: “Who let the dogs out.”

The accident is being investigated by the Met Police, as reported by OK.

An allegedly stolen moped slammed into Danni at 30mph, leaving her with the scar and several other cuts and bruises.

The presenter was visiting a newsagent near her Battersea home when the accident occured.

The Daily Mail reported that two females were attempting to steal the moped when they lost control and hit Danni.

Immediately after the accident, the presenter was left unconscious, covered in blood and with a significantly swollen nose.

A spokesperson told Mail Online that the experience was “truly horrible” for Danni.

They shared: “No one expects to be knocked unconscious while shopping at their local newsagent and the accident has left Danni in shock and fearful to leave the house.

“She’s taking time at home and her mum is by her side — but it’s been a scary ordeal.

“All she hopes now is to regain her confidence, take time offline to recover, and for her facial wounds to completely heal.”

The star has been recovering at home after initially being treated at the hospital.

The Daily Mail reported the incident left her with PTSD and post-traumatic vertigo, which leaves patients feeling dizzy after a head injury.