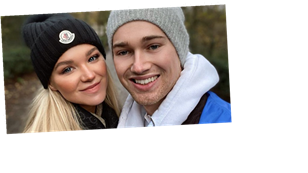 Abbie Quinnen has revealed the full extent of the painful burns she received when she accidentally set her hair and body alight.

The professional dancer was still bandaged in the new images, which show large areas of red across her face.

The 23-year-old needed skin grafts to help repair the damage from the third degree burns, which occurred as she and boyfriend AJ Pritchard filmed footage of a 'hack' for social media.

Reflecting on the terrifying moment she found herself on fire, Abbie told The Sun: “My hair caught fire and within seconds the flames had spread to my top and my body was alight.

“It was such a shock, I was panicking and screaming. I dropped down to the floor and I was rolling to try to put out the fire. I saw my life flash before my eyes. I never thought something like that would happen to me." When the accident occurred in January, AJ and Abbie planned to film a life hack video showing how to cut a glass bottle in half to be used a vase.

The pair dipped a rope in a flammable chemical, wrapped it around a bottle and lit a flame to it.

But the attempt engulfed Abbie, who was leaning on the worktop, in flames.

Once the fire was out, Abbie could see her burnt hair covered the floor.

Her boyfriend and his brother Curtis had to use a pair of scissors to carefully cut the crop top she had on off as her skin "was blistering and it was digging into me".

The dancer was rushed to hospital by AJ, 26, and his brother, Love Island star Curtis, where the two stayed outside all night while Abbie was treated for her wounds.

“AJ was comforting me — I couldn’t speak as I was in so much shock. I was shaking, and I just kept asking if he would still love me. I was wearing a dressing gown and leggings," Abbie said.

Abbie, whose boyfriend recently said doctors called her "super Abbie" as he opened up on her recovery, went on: “AJ did try to come to the hospital to give me a bag of clothes but I was adamant I didn’t want him to see me like this.

"I was embarrassed about the way I looked."

Since revealing the accident publicly, Abbie has been inundated with support from friends and family, who have flocked to her social media to call her 'the strongest girl'.