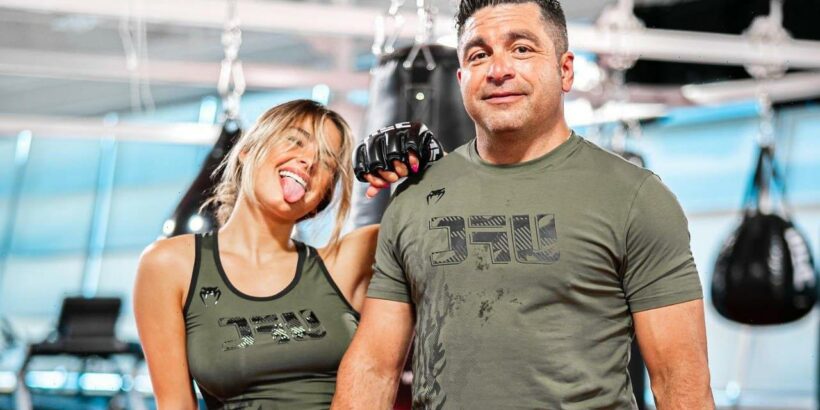 Monty Lopez, who is still legally married to Addison’s mother Sheri Easterling, is spotted hanging out with two women at In-N-Out before a 25-year-old woman accuses him of misleading her into an affair with him.

AceShowbiz –Addison Rae‘s father Monty Lopez is apparently living his life like a single man despite being married. On Wednesday, July 6, the 46-year-old was seen hanging out with two women at a restaurant before news of his alleged affair broke.

In footage and pictures taken by an onlooker, Monty was laughing with two females while waiting in line at a Los Angeles In-N-Out. He seemed to be especially flirty with one of the women, trying on one of the In-N-Out employee hats and asking the woman to take his picture.

Monty returned the favor as he helped take the woman’s picture when she tried on the same hat. The two later chuckled as they saw something on her phone, possibly their pictures which were just taken.

Just a day after that outing, a woman claimed that Monty “misled” her into having an affair and “lied” to her about his marriage. The 25-year-old woman named Renee Ash admitted to being in a relationship with Monty since March after meeting him through a mutual friend.

Renee said Monty told her his marriage to Sheri Easterling was over when it wasn’t and that he and his wife had a “weird relationship,” whereas theirs was different. Renee told Page Six, “Unfortunately, he misled me on his marriage, he lied to me.”

“He told me that we were going to be together and have babies together,” she continued. “He even introduced me to his mom, his youngest brother and I thought we had something real. He told me a story of his marriage that convinced me that they were apart and in the process of getting a divorce.”

Renee said she saw the red flags after several girls accused Monty of hitting on them in person and even over FaceTime. However, the last straw was when she saw leaked footage of the middle-aged influencer caressing a girl’s backside at a party, according to the young Los Angeles resident.

In the said clip which has since been deleted, young TikTok user @marlig alleged, “Addison Rae’s dad is trying to f**k me, I swear to God,” before a man who resembles Monty touched her rear end.

“If anybody was hurting, it was me and his family. I am beyond sorry for that,” Renee confided. “I loved him and I believed him. When I found out about the other young girls, my heart broke.”

She went on expressing her regret for causing pain to Monty’s family. “I am so sorry if anything I have said has hurt his family any more than he already has,” Renee said. “And I am also sorry that he has hurt me so deeply that I believed we were in love.”

Monty’s wife Sherri has broken her silence on her husband’s alleged infidelity. “Personal matters being brought public are always challenging and overwhelming for anyone involved,” the mother of three wrote in an Instagram Story on Thursday, July 7. “I will be okay. My biggest concern is -and always will be- my children and their fragile hearts and minds. I will always do my best to protect them.”

Meanwhile, a source told PEOPLE that Monty and Sherri have been separated and living apart before his alleged affair with Renee. “They’ve been separated for a year,” the source claimed. “Sheri and the boys have been living in Louisiana.”