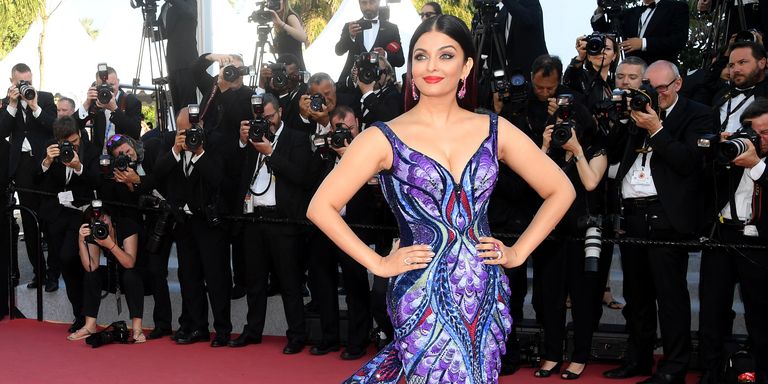 Aishwarya Rai Bachchan has returned to slay on the Cannes red carpet. After transforming into a real-life Cinderella at last year’s festival, the Bollywood superstar reprised her stellar black tie wardrobe with another couture gown by designer Michael Cinco.

“The gown was created to reflect the impalpable dream of a butterfly metamorphosis,” Cinco tells BAZAAR.com of the exquisite creation.

The result has us simply stunned:

The Dubai-based designer did not skimp on the details for this dress: it’s completely covered in Swarovski crystals and French palettes; it consists of ultra-violet, midnight blue, and red thread works; and it boasts a 20-foot train that mimics “a butterfly emerging from it’s chrysalis.” Plus, its body-hugging silhouette and sweetheart neckline compliment Bachchan’s figure perfectly.

The elaborate number took 3,000 hours to make, Cinco reveals. (That converts to 125 days if the dress-makers worked non-stop.)

Cinco initially created the crystal-covered gown for a Swarovski exhibition, but the actress helped make the look her own.

“We worked closely with Aishwarya and her team in creating the perfect fit and making minor alterations to best suit her,” the designer adds.

This is Rai Bachchan’s second year in a row wearing a Cinco original. She made just as stunning of an entrance last summer a frosty blue ball gown by the designer. The Disney princess comparisons were inevitable.

After teaming up two years in a row for the international red carpet event, Raich Bachchan and Cinco prove to be a designer-and-muse power duo.

“Aishwarya’s style is truly empowering,” he gushes. “She uses fashion to instill confidence and reflect a sense of empowerment that is not only beautiful, but also very inspiring. Her timeless style radiates such an allure, as she’s so well versed in her every curve, knowing exactly how to dress to accentuate her defining assets.”

We can’t wait to see what look the pair debuts on next.