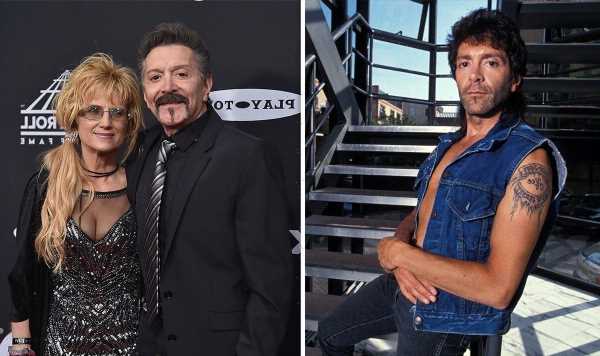 Prince William sings with Bon Jovi and Taylor Swift in 2013

Bon Jovi’s former bassist Alec John Such has died at the age of 70. The band, Jon Bon Jovi, David Bryan, Tico Torres, Phil X, and Hugh McDonald, announced the death of the musician in an emotional statement.

Frontman Jon shared the sad news with his 170,300 followers in a tweet yesterday.

It read: “We are heartbroken to hear the news of the passing of our dear friend Alec John Such.

“He was an original. As a founding member of Bon Jovi, Alec was integral to the forming of the band.

“To be honest, we found our way to each other thru him – he was a childhood friend of Tico and brought Richie [Sambora] to see us perform [sic].

“Alec was always wild and full of life,” the singer continued.

“Today those special memories bring a smile to my face and a tear to my eye.

No details have been provided for how or where Alec died.

The bassist was a founding member of the legendary US rock band Bon Jovi.

He played with the band from 1983 until 1994, playing bass on such hits as You Give Love a Bad Name, Livin’ on a Prayer and Bad Medicine.

Alec is credited with helping Jon form Bon Jovi and was a huge part of the group’s sound.

When he left in 1994, the bassist was replaced by fellow musician Hugh McDonald.

Alec was born in New York on 14 November 1951, originally establishing himself as a figure on the New Jersey music scene in a band called The Message.

He was manager of the Hunka Bunka Ballroom in Sayreville, and was responsible for booking Jon Bon Jovi & The Wild Ones before joining the band himself as an older member.

Alec is credited with bringing drummer Tico into the band, as well as longtime guitarist and co-songwriter Richie Sambora, who left in 2013.

The star previously explained that his age gap with the rest of the band was the reason for his early departure, as he was a good decade older than his fellow bandmates.

Despite being replaced by Hugh, he briefly rejoined Bon Jovi for the band’s induction into the Rock & Roll Hall of Fame in 2018.

Canadian presenter Mitch Lafon penned: “Bon Jovi have shared the news of the passing of bassist, Alec John Such.

“My heart goes out to his family & friends. Thank you for the music and memories. Rest In Peace.”

Actress and presenter Martha Quinn wrote: “I’m so sorry to hear Alec John Such, og member of @BonJovi has passed away.

“I can picture his long black trench coat and red t-shirt in Runaway. He rocked a million faces ->’94.

“To the Such family, please know he will be missed by the entire MTV generation.” (sic)