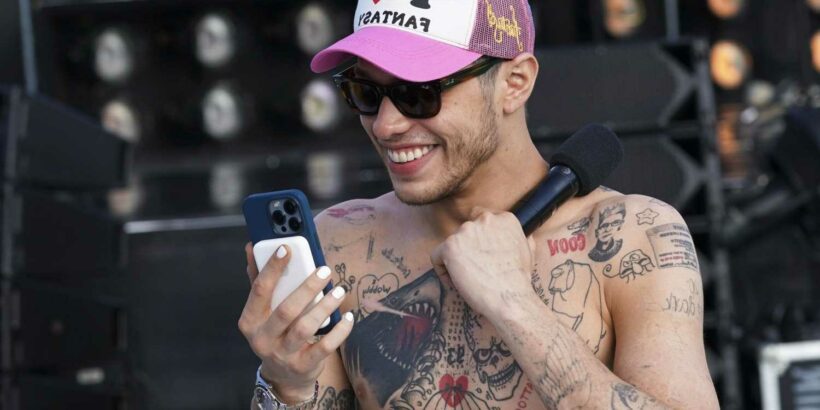 A lot happened over the weekend in the world of Kim Kardashian and Pete Davidson, including but not limited to Pete’s private texts to Kanye being published on his friend’s Instagram account. And said texts seemingly included a selfie of Pete in bed, which sure, fine, nothing to see here, except the giant new “KIM” tattoo on his right shoulder.

Amanda Hirsch of @notskinnybutnotfat was the first to notice the tattoo, which has since been reported on by Page Six and Us Weekly. Though, I mean, it’s possible that this is just a removable ink drawing/doodle, especially since we know Pete is in the process of ditching his tattoos.

Pete actually semi-recently explained why he’d decided to remove his tattoos to Seth Meyers, saying “I honestly never thought that I would get the opportunity to act and I love it a lot. You have to get there three hours earlier to cover all your tattoos, because for some reason, people in movies, they don’t have them that much.”

That said, most of Pete’s chest tattoos appear to still be alive and well judging from this ^^^ picture, and lord knows he has a history of getting tattoos of/for his girlfriends. See: literally all his since-covered Ariana Grande tats.

Obviously, Pete hasn’t confirmed whether or not he got a Kim tattoo, but Kim recently told Variety that she’ll be talking about Pete (and how their relationship started) on the Kardashians’ new Hulu show, so here’s to hoping she mentions whether or not he got her literal name permanently written on his chest.