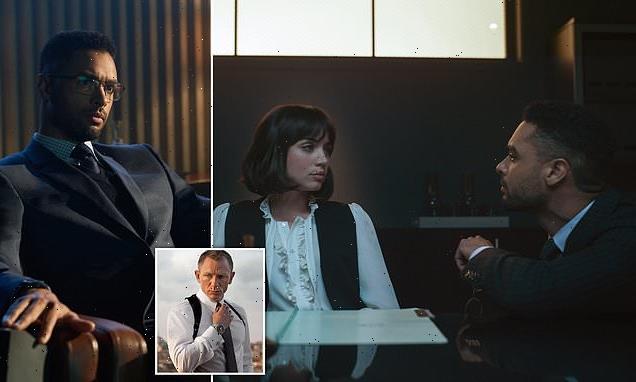 Watch out, 007! A megabucks new spy franchise is about to launch.

Starring one-time Bond girl Ana de Armas, plus Bridgerton’s break-out British star Rege-Jean Page, hotly fancied as the next Bond himself, The Gray Man is a £180 million movie which drops on Netflix next Friday.

It’s been made by the Russo brothers, Joe and Anthony, who were behind Marvel blockbusters including Avengers: Infinity War and Avengers: Endgame — so nobody is more successful at creating huge action films.

Actor Chris Evans, best known as Captain America in the Marvel films, is the baddie and sports questionable knitwear (again, after Knives Out!) and a terrible moustache. 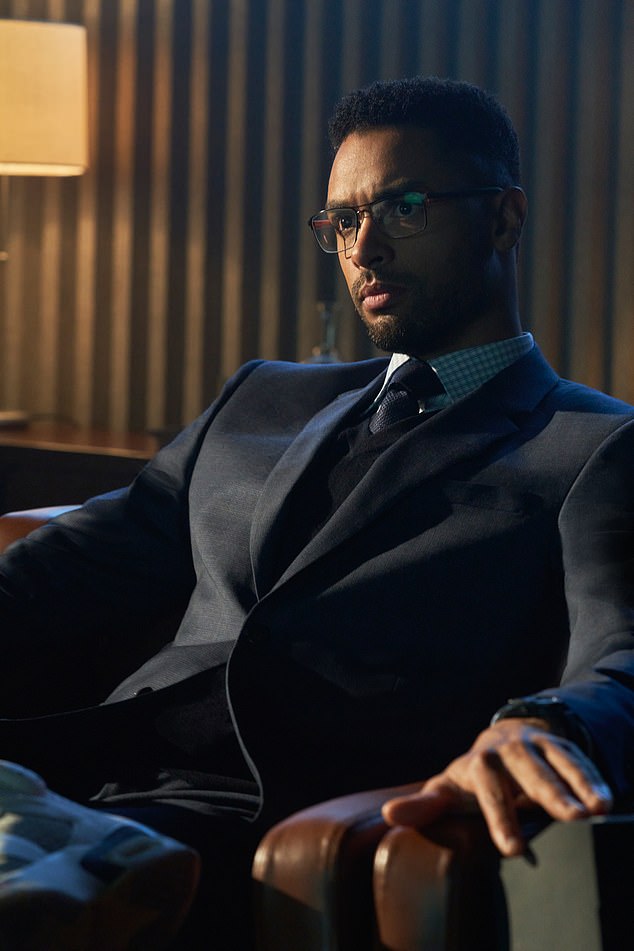 Rege-Jean Page, who plays CIA boss Denny Carmichael, said: ‘It’s a global travel adventure, but with spies, explosions, guns, falling out of airplanes . . . there’s nothing that isn’t in this movie’

He plays a cat and mouse game with a CIA mercenary played by Ryan Gosling.

The possibilities for a sequel and other spin-offs are being actively considered, as the feeling is this spy thriller has serious, Bond-type legs.

Joe Russo said: ‘We’re already thinking through where it goes from here. We like to build out worlds.’

He added: ‘The focus is to make Gray Man 2. Our appetite is voracious and the intention is always to do more than we can.’

Rege-Jean Page, who plays CIA boss Denny Carmichael, said: ‘It’s a global travel adventure, but with spies, explosions, guns, falling out of airplanes . . . there’s nothing that isn’t in this movie.’

Actor Evans agreed it was ‘a fun set’. ‘I love the Russos!’ he said. ‘They set the tone and they really know how to put a good team together. It’s tough to call it a job . . . that’s how good it felt.’ 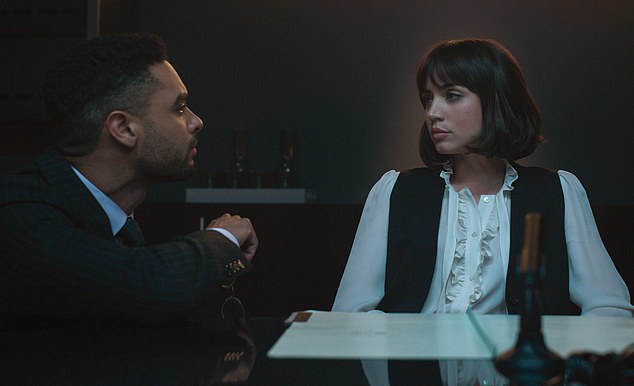 Starring one-time Bond girl Ana de Armas, plus Bridgerton’s break-out British star Rege-Jean Page, hotly fancied as the next Bond himself, The Gray Man is a £180 million movie which drops on Netflix next Friday

Bond boss Barbara Broccoli says it will take ‘years’ to cast another James Bond after Daniel Craig’s final outing as the spy in No Time To Die.

The 25th Bond film was finally released last year. It went into development in 2016 and into production in 2019, but the opening was delayed due to Covid.

Broccoli is in no hurry to make Bond 26, saying earlier this month: ‘We’re working out where to go with him. There isn’t a script and we can’t come up with one until we decide how we’re going to approach the next film because, really, it’s a reinvention of Bond. I’d say filming is at least two years away.’

Some have speculated that the strains of placing Ian Fleming’s spy into a modern environment may lead to a ‘retro cycle’ of Bond films, set during the Cold War, to come next.

Meanwhile the Bond franchise is dipping its toe into television. An eight-part game show called 007’s Road To A Million has been ordered by Prime Video. Two-person teams will undertake Bond-themed endurance and intelligence challenges.

Bryan Ferry famously used his girlfriends on the covers of albums — Jerry Hall graced the front of Siren while Lucy Helmore was on Avalon.

However the model chosen by Ferry for Roxy Music’s greatest hits was Susie Bick, now married to Nick Cave and most famous for her wildly successful The Vampire’s Wife range of clothes.

The 2001 compilation, The Best Of Roxy Music, is to be released on vinyl for the first time later this year, to coincide with the band’s 50th anniversary shows.

The critics raved about her performance as Pamela Anderson in the mini series Pam & Tommy, but it seems actress Lily James was stung by criticism of the project by Anderson herself — and doesn’t want to play a real life person again. She told an interviewer: ‘I don’t know if I’d do it again anytime soon . . . I felt like if I came at it with heart, and a total desire to be honest, that was all I could do.’

Sir Mick Jagger mesmerised the 65,000 strong crowd at BST Hyde Park this year with his moves — and a new BBC documentary about the band claims he copied his shimmies from female 60s stars including Tina Turner and P.P. Arnold.

But while Sir Mick, 79, acknowledges their influence, and has worked with ballet choreographer Patrick Galloway, I’m informed: ‘It’s all his own work — it’s all Mick.’

Dame Prue Leith’s sensational life story is to be made into a movie. Leith, 82, is overseeing the filming of her autobiography, Relish, via her own production company.

The film won’t be short of incident: from her long affair with the husband of her mother’s friend, to sorting out British Rail’s sandwiches, to making a fortune in both catering and publishing — oh, and keeping Paul Hollywood in line on The Great British Bake Off.

‘All I can say is room after room of bouncing bottoms everywhere . . . I was so embarrassed.

‘Anyhow, this guy, he thought it was fantastic. So he just vanished.’

Starring Jan Francis and Paul Nicholas as chalk and cheese lovers Penny and Vince, it was a massive hit with the final episode on BBC1 on Christmas Day 1986 pulling in almost 21 million viewers.

Matafeo said: ‘The show was a huge inspiration to me, growing up in New Zealand, and I’d be genuinely keen to bring it back.’

George and Julia’s flick under fire for ‘colonial gaze’

But their new film Ticket To Paradise, which comes to cinemas in September, is drawing fire for its ‘colonial gaze’. The premise of the picture is that Clooney, 61, and Roberts, 54, are a divorced couple who fly to Bali to try to talk their daughter out of getting married to an Indonesian man she met on holiday.

Clooney and Roberts, who last worked together in 2016 on Money Monster, have said they believe that the movie has buckets of charm and were attracted by the script, which concentrates on their snarky relationship. Clooney is seen getting drunk, dancing and playing beer pong — while Roberts hides the new couple’s wedding rings.

However there are signs that not everyone is amused.

The South China Morning Post, a Hong Kong-based newspaper, has carried criticisms over the casting of mixed-race actor Maxime Bouttier as the Indonesian lover. Bouttier, 29, has an Indonesian mother and French father.

Local filmmaker Paul Agusta said: ‘I’ve been thinking about why they cast a mixed actor who looks very Caucasian to play a local. Not to put down Maxime Bouttier’s skill as an actor, but it doesn’t feel right.’

Agusta, who founded the Bengkel Akting Kuma Acting School, added: ‘It sends a bad message to young Indonesian actors with Hollywood dreams that unless you are mixed, or Caucasian passing, you don’t stand a chance.’

Others think that the whole idea of the film is problematic.

She said: ‘The films perpetuate the colonial gaze that reduces places and people merely to a landscape for Western characters to stand out or assert agency; this gaze depends on the invisibility of labour of local people and the exploitation of natural resources to support tourism.’

The film was written and directed by Cambridge graduate Ol Parker, whose marriage to actress Thandiwe Newton ended earlier this year.

Filming on Ticket To Paradise took place in locations in Australia during the pandemic.

The extraordinary story of how a Canadian schoolgirl spent eight days ‘in bed’ with John Lennon and Yoko Ono after gate-crashing their peace protest is to be made into a film.

Author Gail Renard, who now lives in the UK and has a successful career as a drama and children’s TV writer, first told her story in 2015 in the book Give Me A Chance.

The rights to that have now been bought and although Renard says it is ‘too early’ to discuss the project, buzz suggests that it will be a little like My Week With Marilyn, or the Oscar-winning Judy, in which the familiar story of a megastar is told — at least in part — through the eyes of a young fan or employee.

In May 1969, Lennon and wife Yoko checked into the Queen Elizabeth Hotel in Montreal to stage their second ‘Bed-In’: a ‘Press-conference-cum-happening’ during which they preached world peace from a king-sized divan.

Renard, pictured with the Lennons, and a school friend sneaked up the fire escape of the hotel and knocked on the door — and ended up staying for the duration.

She watched Lennon write the song Give Peace A Chance and then record it — and was given the lyric sheet by him as a memento. It was auctioned for more than £400,000 in 2008. 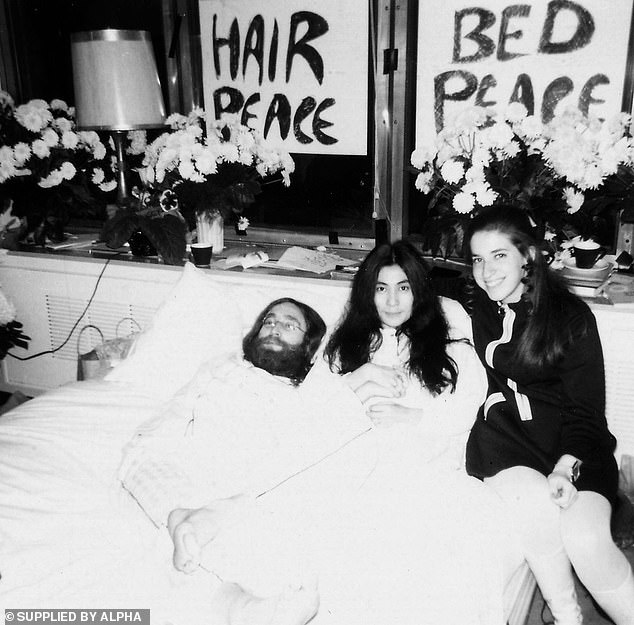 In May 1969, Lennon and wife Yoko checked into the Queen Elizabeth Hotel in Montreal to stage their second ‘Bed-In’: a ‘Press-conference-cum-happening’ during which they preached world peace from a king-sized divan

Will Zendaya’s tennis drama be a smash hit?

Rising superstar Zendaya missed the Met Gala ball in May, explaining that she was ‘playing tennis’. In fact, the 25-year-old was working on her new film, Challengers, in which she plays tennis coach Tashi Donaldson.

The movie, which just wrapped, tells the story of a woman who coaches her husband Art, but after a slump in form he has to compete on the lower-ranked Challenger tour — bringing him up against his old school friend . . . who is also her old flame.

Art is played by Mike Faist, recently seen in West Side Story; and their friend Patrick is played by Josh O’Connor. The film will be out next summer.

Zendaya has been a fan of tennis since learning to play growing up in Oakland, California — as revealed in this picture she shared on Twitter.

She said in a recent interview that it can be tricky to deal with interest from fans. She is dating Spider-Man co-star Tom Holland and only last month denied pregnancy rumours.

‘I’m always trying to be grateful for it all,’ she told Vogue Italia. ‘Because it means people are resonating with the work that I’m doing.’ 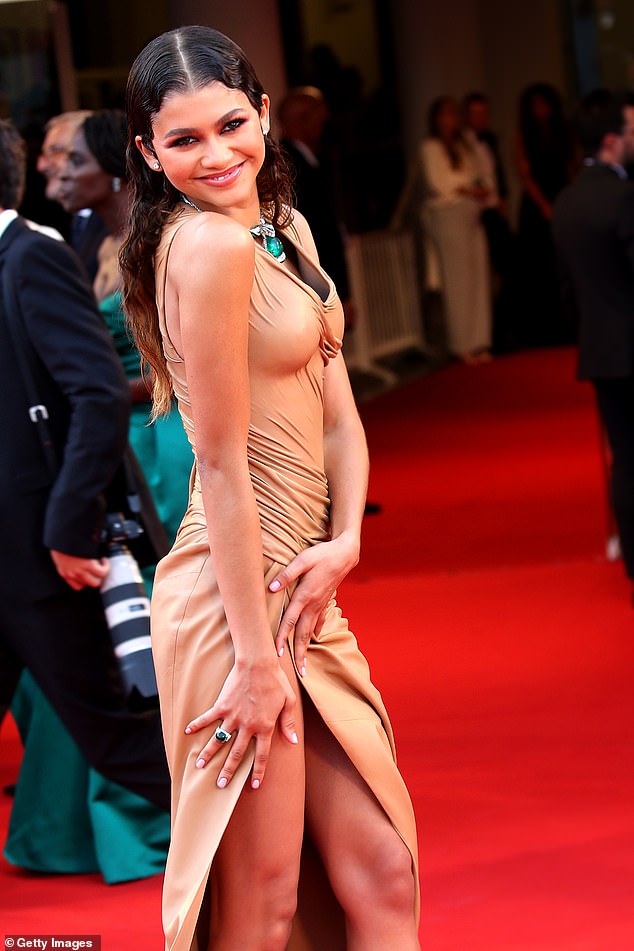 Rising superstar Zendaya missed the Met Gala ball in May, explaining that she was ‘playing tennis’ 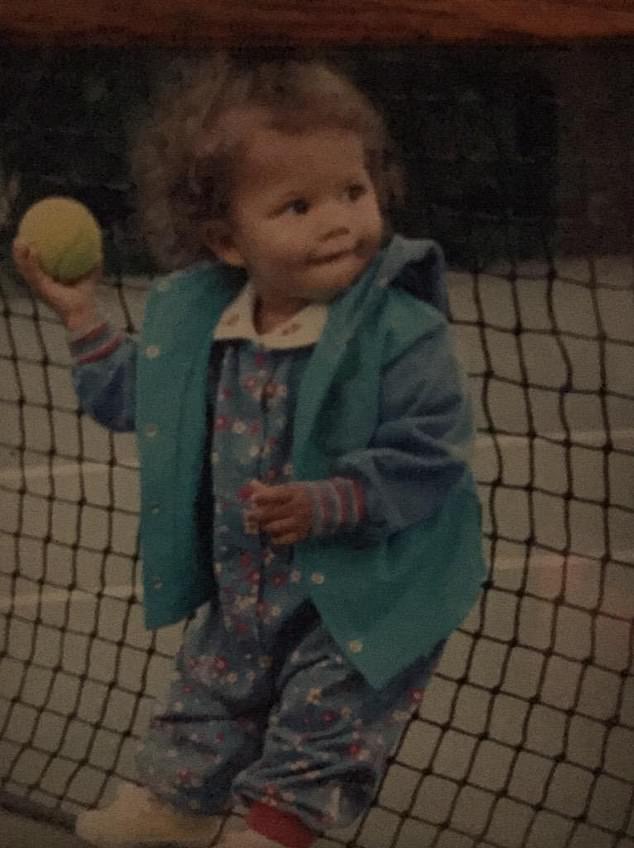 Zendaya has been a fan of tennis since learning to play growing up in Oakland, California — as revealed in this picture she shared on Twitter