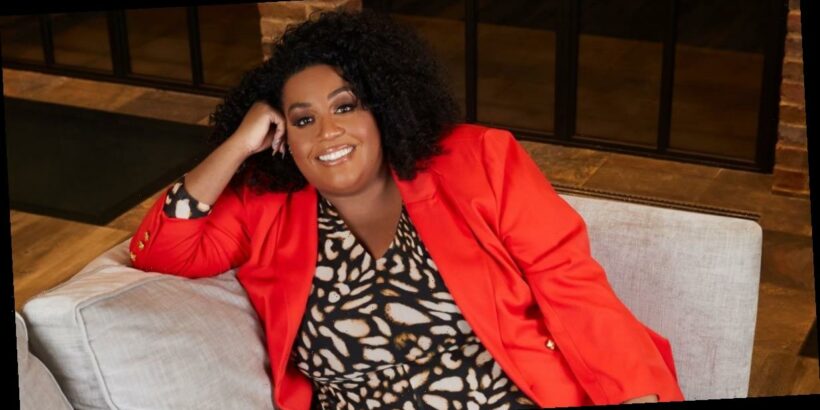 Alison Hammond is fast becoming the queen of our TV screens. From presenting This Morning on Fridays with Dermot O’Leary to joining Ant & Dec for their Saturday Night Takeaway, there isn’t much she can’t turn her hand to. And it’s not hard to see why. During our exclusive shoot it quickly becomes apparent that the 46-year-old is as bubbly in reality as she is on the box – and she frequently leaves us in fits of giggles.

Something else she hopes will put a smile on our faces is her new BBC music guessing game show, I Can See Your Voice. Alison is part of a celebrity judging panel helping contestants try to win a cash prize by guessing who can or cannot sing in a group of strangers – without ever having heard them raise their voices in song. Her co-stars are Amanda Holden and comedian Jimmy Carr.

“I felt like it was something special when we were filming it,” she says of the show, hosted by Paddy McGuinness and based on a South Korean programme of the same name.

Here, Alison, who is mum to 16-year-old Aidan, talks about her bond with her son, learning to put herself first and why joining forces with Amanda and Jimmy has proved the perfect recipe for success…

You look fantastic in our shoot, Alison! Are you feeling confident?

It’s my glam team. They really enhance my beauty. They literally change my face!

You’ve said exercise is key to getting through lockdowns. Has it helped you mentally?

Always. As soon as I exercise I feel happier. I do more and I eat less. I need my trainer Ellis on Zoom with me or I will not do it. I always find something else to do. The last thing I think about is myself, but it’s important to put yourself first and I’m learning to do that. I’ve also learnt that I’m not as motivated in regards to exercise and eating healthily as I thought I would have been in lockdown. I’m not that person unfortunately. I do it when I’m ready.

How did you get on with homeschooling Aidan?

He knew what he was doing so I was the hype team. Sometimes I would get messages from the school saying, “He hasn’t checked into this lesson,” so I had to be on his tail the whole time. He’s doing his GCSEs and I don’t have a clue about the work. It’s another level. I just make sure he has the most amazing breakfasts.

He was born on my birthday and he has a very similar temperament to me. We’re both stubborn. We love as much as we fight but he still wants cuddles even though he’s 16. He still wants his mum, which I love. We have a lovely bond. He’s everything that I always wanted to be when I was younger.

Do you think he would like to become a presenter?

No, he’s not interested. He’s obsessed with Formula 1 and cars. He wants to go to Silverstone College and do Formula 1 mechanics. But he’d be good at presenting because he has that personality. He could fall back on to presenting if he wanted to.

Michelle Obama. I think an hour with Michelle would be amazing and I could pick her brains over a cocktail. I’d love to sit down with Brad Pitt, too. I think we’d get on really well. He’s been to Birmingham loads. Apparently he has mates there.

Was your response an instant yes when you were approached about joining the panel of celebrity investigators for I Can See Your Voice?

It was a no-brainer. When they told me about the concept and how there will be bad singers and good singers, but we’re not going to see them sing, I thought, “Well, obviously I’m one of the best singers you’re ever going to come across!” It was just exciting not to be a contestant and be on the other side. I hope people love it. I think it’s a brilliant show for a laugh and it will bring families together. It felt like having a little night out in the studio.

It looks as though you had a good time filming it, too…

It was so much fun. Jimmy and Amanda put a smile on my face. They are the funniest guys to be around in a lockdown. It was lovely to be with Jimmy, who obviously fell in love with me. We had the banter, but sadly we never had a cuddle or a kiss. I’m such a touchy-feely person, I just really struggled with that side of things. We got to do a little miming duet, though. At first I didn’t see it working, putting me, Jimmy and Amanda together, but whoever did is a genius. And Paddy was a dream to work with. We stayed in the same hotel and he had a cross trainer in his room. I was like, “Wow, I really need to be a bit more diva!” That’s why they all looked so good. Paddy is so healthy. He was always running.

Did Amanda share any of the judging tips she’s picked up from doing Britain’s Got Talent?

She brought a wealth of experience. She didn’t really teach me about that, but she taught me how to show a bit more leg! You know, sitting down and how to edge the skirt up a little bit. She taught me a bit about sex appeal!

So can we expect you and Amanda to be quite cheeky together?

She kept getting in trouble for opening her legs. They had to keep saying, “Amanda,
keep your legs shut!” That really tickled me. But mainly it was our laughs – they’re just so loud. We were like laugh twins. And then you’ve got Jimmy’s laugh. We sound horrendous together – we were like three horns.

What does each of you bring to the panel?

I think Jimmy was probably the best at spotting whether they were a good singer or not. I don’t know how he did
it – I think he just guessed. Amanda brought her expertise because she is a singer. She was really good at spotting whether or not someone had an accent or a lisp. She was really quite clever. I just literally went against whatever I was thinking because I just couldn’t guess it. It was the hardest thing I’ve ever had to do.

Amanda joked that you were trying to find your future husband on the show. Did you spot anyone you liked?

I spotted a few potentials. One was gay, so I couldn’t have him. I think the rest were too young for me. I’m not looking for a toy boy. I want someone older and wiser who can look after me.

Do you use dating apps?

I’ve been there and done it. I’ve had a boyfriend from a dating app and I’m really not into them any more. Especially during these times. You can’t even meet up with someone and I don’t just want to be doing loads of messages. I’d rather meet someone naturally. Right now, being single is the worst, but dating in lockdown is not my thing.

Have any celebrities been sliding into your DMs?