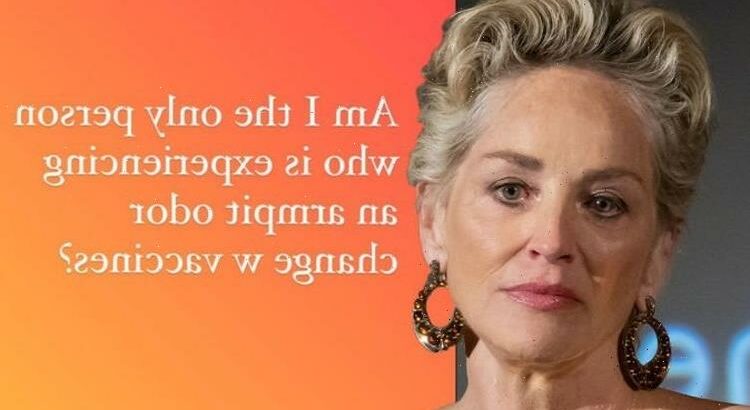 Sharon Stone recalls her near death experience after brain bleed

Basic Instinct actress Sharon Stone, 63, has taken to Instagram and Twitter to ask about a possible side effect she has noticed after getting the Covid vaccine. Sharon quizzed her followers on the situation, asking if they have had a change in “armpit odour” after getting their vaccinations.

Am I the only person?

She penned in view of her 223,600 followers: “Am I the only person who is experiencing an armpit odour change w vaccines?” (sic)

Many took to the comments to share their potential side effects after getting the vaccine.

Paulckelly42 said: “I’ve had 3 jabs now and I’ve not experienced that or heard anyone else say they have.

“Felt c***py for a couple of days with the first 2 and a sore arm with the booster. But nothing else.”

Emmalh added: “I have read about this! Apparently some people in long term relationships are suddenly finding their partners smell a real turn off.

“Something to do with pheromones or some such.”

Moondncr55 commented: “No you are not. Though maybe our body just changes as we age. It’s interesting to say the least.”

According to the NHS website, side effects from the vaccine are usually mild and should not last longer than a week.

This includes a sore arm, feeling tired, a headache, general aching and feeling or being sick.

More serious side effects, such as allergic reactions or blood clotting are extremely rare, according to the NHS.

The star recently attended the Los Angeles premiere of The Tragedy of Macbeth and stole the show.

Sharon Stone donned a unique ensemble consisting of a sheer leopard print dress, which exposed one part of her midsection while seemingly revealing part of her bra.

The star paired the outfit with a black overcoat draped over her shoulders while walking the red carpet in a pair of burgundy heels.

Sharon accessorised with a black Dolce & Gabbana clutch and pink hoop earrings, whilst appearing to have opted for a radiant look in the make-up department.

Other celebrities at the Hollywood movie bash included the film’s stars Denzel Washington and Frances McDormand.

Meanwhile, in November, Sharon shared a sweet social media post as she asked fans to keep her mother, Dorothy Marie Stone, in her prayers after she had suffered an acute stroke.

“Say a prayer for Dorothy Marie Stone, my mom, who has suffered another acute stroke tonight. Thx,” the Catwoman star revealed.

An acute stroke occurs when blood flow to the brain is disrupted, subsequently injuring brain tissues and cells.

Sharon was met with an outpouring amount of love and support from her fans and friends after sharing the news online.