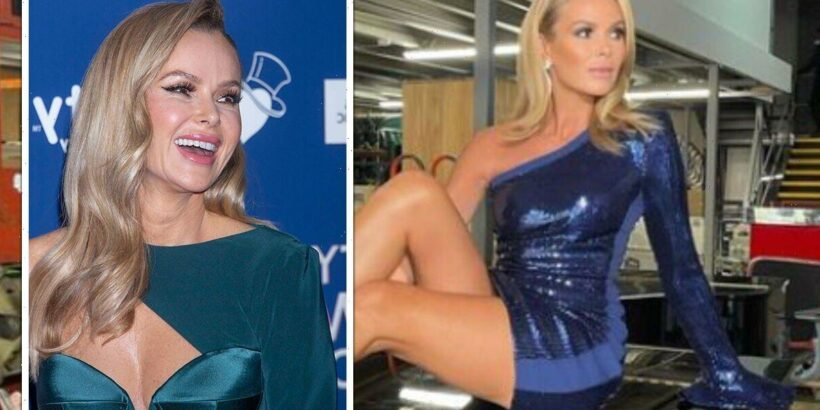 Amanda Holden, 51, has been gracing television screens across the world for over three decades, and still dresses as spritely and outrageously as she did in her twenties. The actress says she hopes she’ll age like Joan Collins and turn into a “Glammy” instead of a “Granny”.

Although she first made her start in entertainment through acting, Amanda became a household name as a judge on Britain’s Got Talent.

Slowly, Amanda’s appearance on the show collected plenty of attention, but the star insists she never had any ill intent.

Speaking to The Sun, Amanda pointed out that when she was younger “no one really paid much attention” to her clothes, and she simply continued to live out her fashion fantasies.

She revealed that her cardinal fashion rule is to “always be overdressed than underdressed for any situation”, a requirement she has held since the age of five.

Evidently, the star sticks to this rule as she takes to Instagram daily showing off the runway-ready outfits she dons to host a radio show.

Her edgy and somewhat raunchy looks have often led viewers to assuming she’s trying to appeal to the male gaze, but they could not be more wrong.

She said: “I dress for other women, and myself. I constantly look at what other women are wearing and stop people and go, ‘Oh my God, where’s that from?’.”

This is also the reason why fans will so often spot Amanda in America, as she revealed: “You do your food shop and there is someone who says: ‘Where’s that dress from?’

“Or ‘Oh, it’s so pretty.’ and you have a big chat about it, whereas it rarely happens here.”

As far as her age is concerned, the Heart Breakfast host says she doesn’t even want to be young again but just wants to age with her signature style in hand.

Her two daughters, Hollie, 10, and Alexa, 16, have questioned if she will ever look like “an old granny” when they have children of their own.

She simply responds: “No, I’ll look like Joan Collins. I want to be called Glammy, not Granny or Nanny.”

Jennifer Aniston, Kylie Minoque and Jennifer Lopez are also among Amanda’s list of women that inspire her “every single day”.

She revealed that she hopes to stamp out the stigma that growing older means not being able to wear what she wants, saying she doesn’t want to “get to an age and give up on yourself”.

While her noble cause has kept the fashionista on top of trends for the last three decades, she also thrives in the scandals she causes with her looks.

She said: “That’s what it’s all about. It’s hilarious how much controversy my outfits have caused — people have got so much time on their hands.”

Although she may thrive on the hilarity she creates, Amanda promises not to indulge in anything “too mad” as she dislikes only being able to wear an outfit once.

Amanda’s eldest daughter with her husband Chris Hughes, Alexa, is preparing to enter the modeling world, with her parents’ industry experience at her disposal.

Amanda gushed: “She’ll be looked after because she can look after herself pretty well. And she’s got a tiger mummy and a daddy as well.”

Regardless of how her career picks up, Amanda and Chris have both insisted she finish her education first to give her “as many options as possible once she’s 18”.