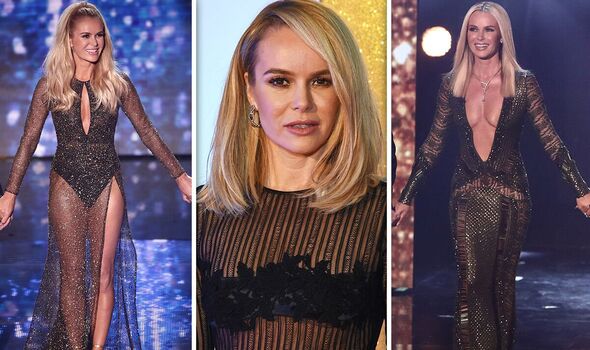 Amanda Holden has stunned, and ruffled, plenty of viewers with her daring outfit choices throughout the years. Here, we look back at some of her most notable looks.

Throughout Amanda Holden’s 16 years as a judge on Britain’s Got Talent, the 51-year-old has donned countless gowns that have both stunned, and ruffled, plenty of viewers.

Her most risky looks include a sexy Julian MacDonald dress that she wore in 2017. The sheer gown featured a plunging neckline that fell all the way to her navel, baring almost her entire chest.

After Amanda wore the daring dress to the Britain’s Got Talent semi-finals, she sparked a record-breaking 663 Ofcom complaints.

Nevertheless, that didn’t stop her and she has gone on to amp up her daring fashion choices ever since.

Here’s a rundown of some of her most famous looks, including a hot pink latex dress and malfunction-dodging yellow midi that she wore to the BGT auditions last year.

Amanda will return to TV screens tonight with her brand new series, Amanda and Alan’s Italian Job, alongside Alan Carr.

Amanda Holden’s daring Julian McDonald gown broke a record with 663 Ofcom complaints. The plunging neckline revealed most of Amanda’s chest and came all the way down to her navel.

Amanda Holden flashed the flesh in 2019

Amanda Holden’s spiderweb dress amassed nine Ofcom complaints when some BGT viewers took issue with the gown’s sheer fabric which revealed one side of her chest.

Amanda donned this asymmetric dress in 2020 and two people complained to Ofcom after they thought they caught a glimpse of Amanda’s nipples.

Amanda Holden left little to the imagination in this sheer number

In 2020 again, Amanda’s sheer, sparkly dress received 235 Ofcom complaints. The mesh fabric showed off the judge’s fabulous figure as she commanded attention on the Britain’s Got Talent stage.

Amanda Holden ditched her underwear in this daring dress

Amanda Holden strutted her way into the Britain’s Got Talent auditions in 2022 wearing this bold yellow dress. The 51-year-old pulled it off as she managed to dodge a wardrobe malfunction despite the dress’ awkward cut-outs.

Amanda Holden posed up a storm in her hot pink dress which showcased her enviable physique. Amanda paired the dress with matching court heels and wore her hair to one side.

Amanda Holden stole the show in this glamorous bejewelled gown

Amanda Holden flashed plenty of sideboob in this backless dress that was covered head-to-toe in silver and emerald rhinestones. The Heart FM presenter managed to dodge a wardrobe malfunction once again despite the gown’s skin-baring design.