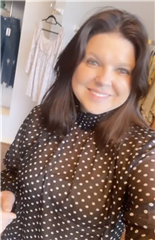 Just because Amy Duggar’s extended family sucks doesn’t mean that there’s anything wrong with her.

Unlike her cultist cousins, Amy can worship freely and believe what she wants.

She can also dress how she wants.

Amy is using that freedom to full effect by showing off a sheer top that accentuates her glorious curves.

In most families, the 35-year-old married devout Christian who is also a mother would not be branded the “rebel” cousin.

Most families are (thankfully) nothing like the Duggar clan.

In their world, Amy is a worldly extremist who lives in a “corrupt” world, consuming the devil’s media.

Amy took to her Instagram Story this week to model a see-through top.

The dark brown fabric boasts an array of polka dots but is very clearly, well, a little clear.

Beneath this shirt, Amy’s undershirt, which appears to be a white spaghetti strap tank top but could even be a bra, is visible.

“Hey y’all,” Amy says to address her fans and followers. “I hope you’re having a good day.”

She noted: “I have this shirt that a lot of people are loving.”

“And,” Amy continued, “I wanted to post it on here in case you’re one of them.”

“If you want a great spring top that you can layer,” Amy advertised.

She recommended: “this is a great one to add a spaghetti strap under.”

Given its versatility, Amy suggested the top “for work, for teaching, for literally anything.”

“I love that there’s a little detail of a smocked neck going on,” Amy appraised.

“And,” she detailed, “a little ditzy print.”

Amy gushed: “love this one!” We’re sure that many of her followers will to.

The shirt of course comes from her own shop, Thirty-One-Thirty boutique.

The sizes range small, medium, and large — whatever size Amy is wearing, it is clearly working for her.

Obviously, for most former reality stars, “woman wears shirt, recommends it to followers” is not that interesting.

But Duggar fans are often fascinated by the sometimes stark, sometimes subtle variations among Amy’s cousins.

Who can wear pants, who can wear makeup, who can drink alcohol … in each case, the decision is made by the woman’s husband.

But Amy is not part of the cult.

Even if she were, her own husband would clearly endorse his wife living as, you know, an actual person, not as chattel.

It’s probably safe to say that the bulk of Amy’s cousins, even the married ones, would not wear this top around family, if at all.

What may be even more significant is that most of Amy’s male cousins would be forbidden from looking at someone in this top.

After all, Michelle trained her daughters — as part of burdening them with the responsibility of managing the lusts of men — with “warning” their brothers.

“Nike,” the girls were trained to say, if they saw a woman dressed like a normal human being and not like a sex-negative cultist.

The boys were then expected to look down at their shoes rather than see a fellow human being with, say, bare shoulders.

(As fundamentalists, perhaps they were unaware that they were teaching their daughters to invoke the name of Nike, goddess of victory, by referencing the shoe brand)

Amy has taken great steps to separate herself from her extended family’s extreme beliefs and toxic brand.

This has largely insulated her against blowback from Josh’s CSAM arrest and conviction.

While Amy can sell shirts to her followers, those who have been less outspoken (which is basically all of the Duggars) have to tread lightly on social media.