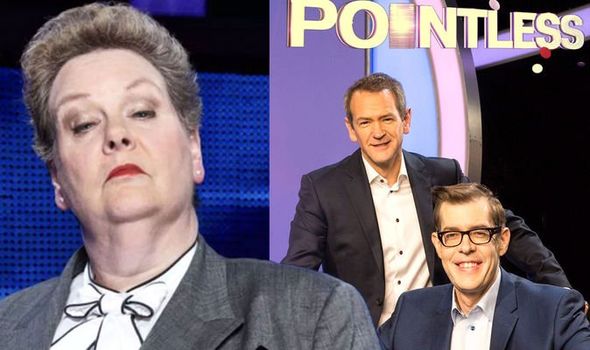 Anne Hegerty spoke out on Twitter yesterday after the rivalry between The Chase and Pointless – which both air around 5pm – came into question. One viewer of the latter compared the daytime shows to rival bands Blur and Oasis, before The Chaser spoke of BBC host Alexander Armstrong, 49. The 60-year-old said the singer and presenter was actually a fan of his competitor, before talk turned to Bradley Walsh. She joked about the 58-year-old sabotaging the other’s car, as the Governess star broke her silence on the matter.

You can like both! Honestly you can! Pointless star Alexander Armstrong once told me he likes The Chase

“So I’m not familiar with Paul Sinha before this. He’s… he’s on a quiz show? #Taskmaster,”(sic) the user had started.

After someone clarified he is on “The Chase, ITV,” she confirmed why she had not known: “Devoted #Pointless fan.”

It was then that she stepped in, saying the person in question could be a fan of both: “ITV+1 is your friend here!”

But they questioned: “Is that allowed? I thought we’d picked our sides and that was it. Like Roundheads and Cavaliers, or Blur and Oasis.”

The TV favourite continued: “You can like both! Honestly you can! Xander Armstrong once told me he likes The Chase!” 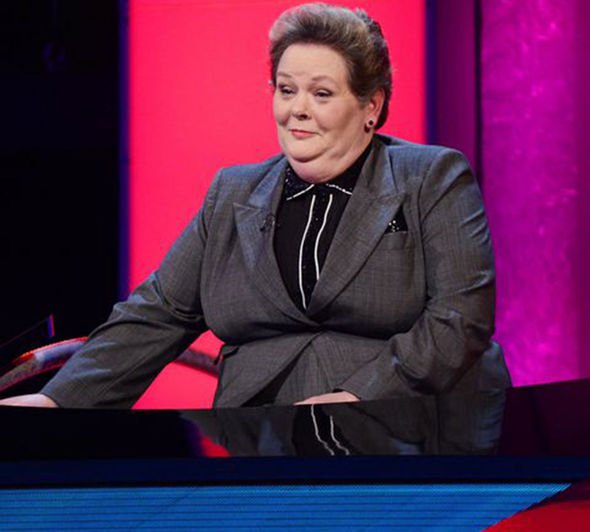 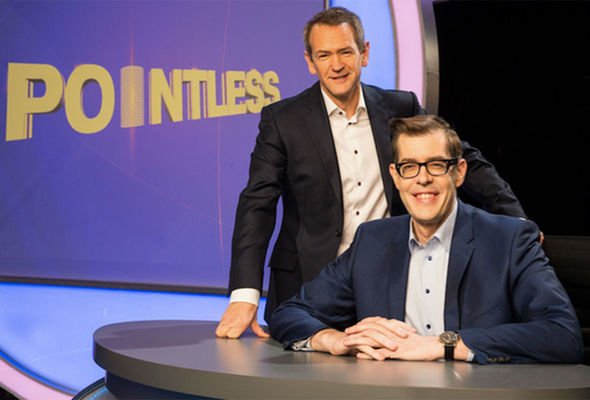 The viewer then quipped: “Then explain me seeing Bradley Walsh letting the air out of his tyres!”(sic)

Anne added in jest: “WE DO NOT SPEAK OF THAT,” with a crying with laughter emoji.

The Chase first aired just two months before Pointless launched in the summer of 2009, however the former’s initial series had just 10 episodes to the latter’s 30.

Pointless, which is also fronted by Richard Osman, has been running for a staggering 21 seasons and for the last eight years has had a celebrity edition.

The Chase, which is now in its 13th run, has also developed a star-studded addition and family-focussed instalments. 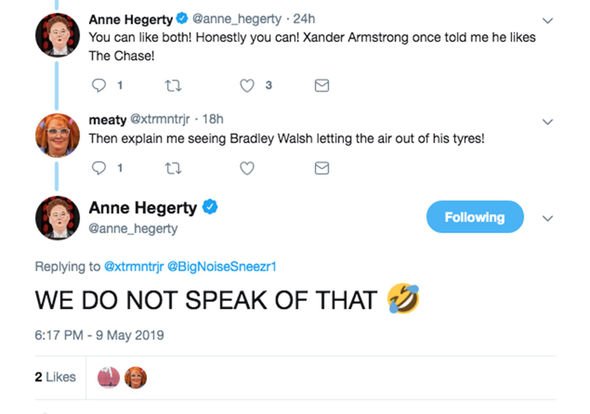 One Twitter fan had posted: “Catching up on a quarter final of #britainsbrighestfamily with @anne_hegerty on @itvhub tho it’s that fast by time get answer it’s on another question.”(sic)

She responded: “We don’t want it to drag,” and they got back: “Ano I’ll have to get quicker.”

Meanwhile, Anne Hegerty turned heads earlier this week with her glamorous makeover at Pride of Manchester 2019.

The Chase airs daily at 5pm on ITV, while Pointless continues at 5.15pm on BBC One.