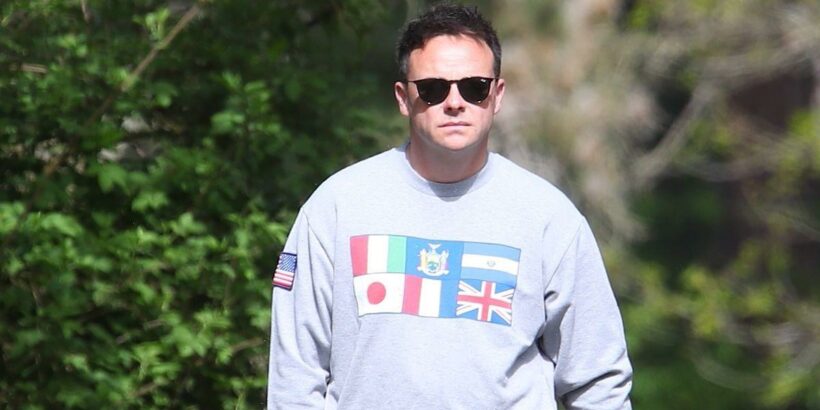 Ant McPartlin was spotted making the most of the Bank Holiday sunshine on Monday, 2 May, as he took his pet dogs for a walk in a park near to his home in South London.

The legendary host, 46, who is one-half of presenting duo Ant and Dec, donned sunglasses whilst walking his three dogs, Hurley, Milo and Bumble in a London park.

Ant moved to Wimbledon, South London, following his divorce from ex-wife Lisa Armstrong in 2018 who received the keys to the couple's former £5million Chiswick London house as part of the settlement.

The West London home was put on the market in 2019 and Ant's move to Wimbledon saw him move away from the same street as his co-star Declan Donnelly, who still lives in the area with his wife Ali Astall and their daughter Isla.

Ant now lives in his £6million South London home with his wife Anne-Marie Corbett and their three dogs.

The Britain's Got Talent host shares Chocolate Labrador Hurley with his ex-wife Lisa and has two maltipoos called Milo and Bumble with his second wife Anne-Marie.

In a previous interview, Ant admitted that both he and his ex-wife were both crazy about their dog.

He said: "There’s a loyalty and a love and a companionship with Hurley that you can’t describe.

"We still share quite evenly. Hurley’s welfare comes first and we both love him very much. That’s the way it is really."

Viewers of Ant and Dec's Saturday Night Takeaway got a glimpse of the star's home as lockdown restrictions forced both presenters to take on the role as host from their own living rooms.

The South London home boasts seven bedrooms, an open-plan kitchen and a large media room kitted out with lush interiors and luxurious furniture. The master suite is also home to an impressive walk-in wardrobe and an en-suite fit for a celebrity.

Ant is currently starring alongside Dec as host of the latest series of Britain's Got Talent as well as taking a trip back in time in a £2million Santander advert which sees the presenting duo don their best '90s look in a nostalgic homage to their Byker Grove characters PJ and Duncan.

The former Byker Grove star was also recently spotted out on a walk alongside wife Anne-Marie after footage emerged of the BGT host receiving medical treatment on set of the ITV show following an incident with a coconut.

During an act involving a table filled with fruit, the star couldn't resist the urge to smash a coconut against his head which left him bloodied and with a bandage from the medical team after the stunt didn't quite go to plan.

Thankfully, it appears the open wound caused by the coconut has healed and the bandage, which he had to apply daily for three weeks, is nowhere to be seen.

For all the latest showbiz news, sign up to our daily newsletter here.