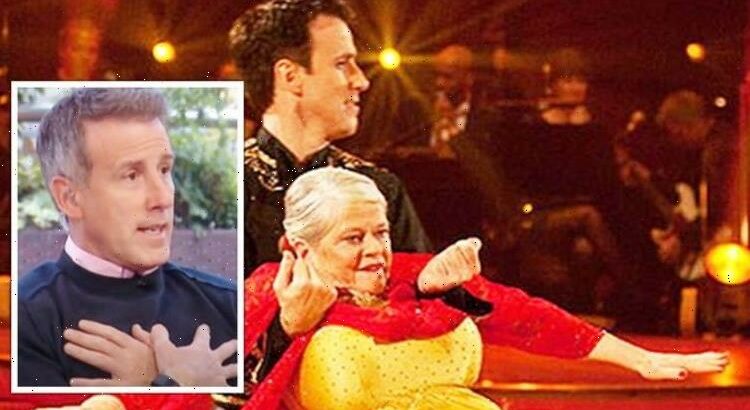 While viewers enjoyed watching Ann being hopelessly dragged around the dancefloor dressed as a giant canary, their popularity reportedly led to the pair being approached for their own sitcom.

Comedian Paul Kerensa, whose credits include writing for Miranda and Not Going Out, has claimed he was approached to write the comedy.

The comic dished on the unlikely collaboration on his Lunchlift Live video stream, according to British Comedy Guide.

Paul claimed he met Ann in 2013 after appearing on BBC discussion show Are You Having A Laugh? – Comedy And Christianity, when she chatted to him afterwards about her idea.

The comedian explained: “I thought: ‘Really?’ Ann Widdecombe? A sitcom?”

“She said: ‘Yeah. With Anton… could you put some ideas together, see if we could pitch it around?’”

Paul explained that a meeting was arranged where he suggested some ideas including “Ann Widdecombe and Anton Du Beke share a flat – Here’s some of the adventures they can get up to”.

He claimed he put together some writing samples with a “few pages to pitch” but added that Anton and Ann’s agents at the time had asked him to “go and write a half-hour episode and then you can take it to a production company”.

Paul also claimed that one of their agents wanted him to write the script and pitch on their behalf.

“They left it like ‘well, here’s what’s going to happen. You’re going to go and do the work and you’ll let us know when it’s ready to film’… So you know what? I didn’t do it, I didn’t do any of the work,” he admitted.

Paul added that he would rather be “the guy who saves the world from the Widdecombe sitcom”.

“Even Ann would agree, she’s probably not Rowan Atkinson,” he said. “Yes, she can dance funny, her and Anton, they are a double act to be reckoned with.

“Maybe they’re in development elsewhere. Maybe they got some other writer to do it for them,” Paul added.

Following Paul’s claims, it didn’t take long for people to share their thoughts about the sitcom on social media.

One joked: “Thank the gods of #comedy we were spared this.”

Another commented: “A Strictly VT, but 6×30 minutes! Who wouldn’t want to see that?”

While a third added: “Some TV programmes should never be made. This is one of them.”

Meanwhile, Strictly Come Dancing is set to return to BBC One next month with Anton on the judging panel.

The professional dancer has stepped in to temporarily replace Bruno Tonioli.