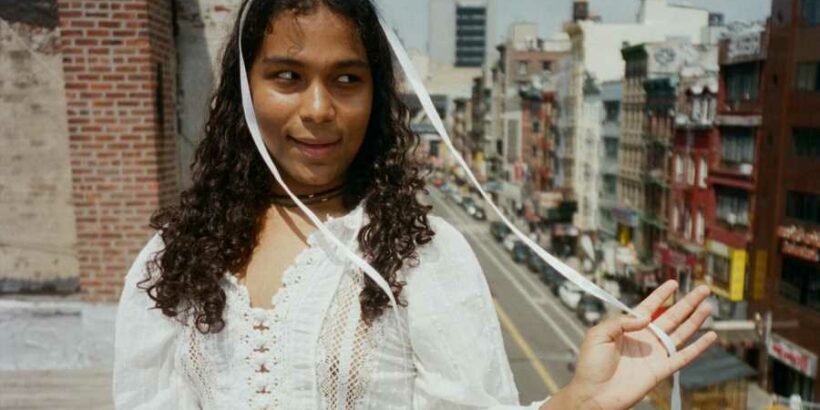 Devin Halbal has a distinct memory of her first experience with “doll activities.” It was three Powerpuff Girls toys — the intuitive Blossom; Buttercup, known for her tough exterior; and the optimistic Bubbles. She was in preschool, and wanted to bring the dolls in for show and tell. But her mom refused, so Habal brought in a photo of her cat instead. “That was the first moment where I knew something was wrong with me playing with dolls,” Halbal tells Rolling Stone. “It was just, like, a matter of not letting other people know that I played with dolls.” But times have changed. Halbal, 23, now displays the qualities of each of her favorite Powerpuff dolls — and being a trans woman who grew up in New York City, it’s helpful to have all three. And today, she’s turned what she calls “doll activities” into a way of life.

With Roe Falling, LGBTQ Families Fear They'll Be the Supreme Court's Next Target

'Gay Men Make Up Our Own Rules': Inside the Making of 'Bros'

Known to her fans as Hal Baddie, Halbal has been creating content as a travel influencer on TikTok since June 2021, growing her following (which is now over 335,000) by sharing clips of her solo trips around the world. Part of what makes her appealing to her fans — whom she calls “dolls” — are her unique catch phrases, like “Met Gala behavior” and “Doll check-in” that often get picked up by her followers on TikTok. Her uniquely personal content, which she films with a selfie stick, became popular as a genuinely positive ray of sunshine amid a global pandemic. Now, she’s getting sponsorships — just this summer, she’s got trips planned to France and Spain, all courtesy of brands who love her vibe.

It’s late May, and Halbal is sitting outside at a café on a trendy block in Williamsburg, Brooklyn. It’s hot — all of a sudden summer — and she’s wearing a mustard yellow knit sweater and beige leggings, her small purple crossbody bag at her side. Long curls drape over both shoulders except for some fly-aways at the top of her head, and noticeable stubble around her lips and chin. Halbal is unapologetically loud and vibrant, and even when she reflects on serious topics, like her upbringing, she does so with a smile. Growing up in the Bronx was difficult for Halbal because she never felt accepted for who she was. “I was always very femme. I was always really girly. I just never felt like I could really express myself,” she tells Rolling Stone.

During her senior year of high school, Halbal told her friends that she identified as gay, but she didn’t share the news widely. When talking to her close friends, she would send Snapchat messages, which she liked because they would disappear after they were seen. She had a main Instagram account, but she only gave people she considered close friends friends access to her “finsta” (fake Instagram). The content on that finsta was similar to her TikTok now — random thoughts, nature photos, selfies — and it was where she felt comfortable enough to eventually come out to her friends.

Part of Halbal’s reason for being so private, she says, is she didn’t feel comfortable with the way she presented during high school. “I never really had any experiences as a gay person… and I truly think it was because of the dysphoria,” she says. But in her freshman year of college, she “tried on” different gender identities, as she explains it, and searched for what felt right for her. She identified as nonbinary, then gender-fluid, before realizing that she identified as a woman.

These days, Halbal’s content is her escape from the world’s harsh realities. It allows her to do the things she loves most: travel and talk. Any chance to leave New York, she’ll take it. “I feel like environments have such a big impact on your mood, really trigger certain memories,” she says, explaining that leaving her home city gives her a chance to stop “re-traumatizing” herself. Ideally, Halbal says, she’d be on an endless retreat, “where everything looks beautiful, I’m surrounded by fresh fruits and fresh veggies, and I go swimming every day,” she says. “Oh, I love being away from systemic transphobia!”

Though she doesn’t have an immense following by TikTok standards, the phrases she’s popularized have been shared far beyond her fans. One of her favorite words, “doll,” she uses as a noun, an adjective, and a verb. Halbal says that “doll” is an energy — she feels people who identify as a doll are very feminine, but anyone can be a doll if they want to be. “Doll activities” — another term she coined — means any sort of fun, positive, bright, and joyful experience a doll may partake in. A “doll check-in” is when Halbal whips out the selfie stick (“I feel like it brings out like an inner supermodel,” she says), usually while traveling in a new destination. It’s a call to her fans that she’s about to drop new wisdom or share a personal tidbit about her life.

Sometimes, her phrases go semi-viral, like “Met Gala behavior” — a term for when you’re dressed in an ensemble that makes you feel beautiful. This spring, the hashtag on TikTok gained over seven million views, though it didn’t necessarily get Halbal the fame she believes it should have. For one thing, the Met didn’t invite her to the event — and for another, the big accounts that amplified it often didn’t link back to her. “A lot of people love the girl’s creativity, and a lot of the people love the girl’s audios,” she says. “I feel like it’s really important that if they’re bigger [creators] with large platforms to credit me, especially if they use it in their caption.”

While Halbal is open to her fans on TikTok, there are still parts of herself she doesn’t reveal. She says she feels most like a Russian doll, and in speaking with her, it’s easy to see why. Halbal has so many layers, and the more you talk with her, the more you can see the smaller dolls inside — a chance to know the real Devin Halbal. But for now, her followers only get to see the parts she wants them to, and those parts are almost always positive. “I don’t have time for negativity,” she says. “Disassociation, escapism, call it what you may, but that’s just how I survive. It’s how I thrive. I’m more than my trauma.”

Halbal plays with her hair as she talks about when she started “experimenting” with “feminine” clothing. “You won’t see me in, like, 20-inch heels with the nails done, hair done, and makeup on,” she says. Her disjointed relationship with makeup stems in part from a physical assault she suffered at 19, while riding the subway home from a party. In an essay she wrote for Teen Vogue, Halbal descibed how a man smiled at her, which she presumed was because of the eye makeup she’d donned that night. Moments later, he kicked her in the head and screamed a homophobic slur at her. Ever since, she says, she’s “been really scared about makeup.”

The assault, she says, has left her with PTSD. She’s very aware of her surroundings — her eyes look past me as she speaks, and sometimes she’ll look behind her as she walks. Part of the awareness comes from being on edge from the attack. After she came out as trans, she says, she never really felt comfortable in the Bronx. “I didn’t really feel safe in that environment,” she says. “People don’t really have an understanding of gender.”

Another part of her anxiety comes from being recognized in the street by strangers asking for photos and videos. Halbal has always been more of a loner — it’s why she travels alone, and she makes her TikToks on her own. It’s precisely why her selfie stick has become so much a part of the content she creates. Whenever she thinks of a new phrase or mantra, she whips out her selfie stick and extemporaneously records herself. Yet there are so many moments when she’s filming and someone crashes her video in the last few seconds. “It’ll be something like a person screaming ‘Yass!!’ or “I love you!’ which I’m not saying I don’t appreciate, but it’s just one of my biggest pet peeves when —”

At this moment, a petite blonde woman with a slicked-back low bun interrupts. “I’m sorry,” she says. “I hate to bother you, but everyone I know and their mothers are obsessed with you. Can I get a picture?” Halbal welcomes the photo op and sits back down, right where she left off, saying that it can be annoying when people mess up her take. “I don’t really feel uncomfortable when people come up to me ask for pictures, that’s sweet,” she says, “But it’s when I’m filming that I get mad.”