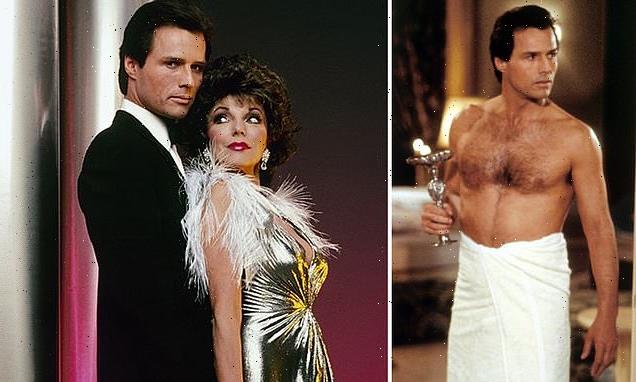 DAME JOAN COLLINS: My husband with real Dex appeal! As Mike Nader, the actor who played Dynasty’s Dex Dexter dies, actress relives their sizzling chemistry including the time he kissed her so hard he drew blood

I’ll never forget the day in 1983 when the producer Aaron Spelling called me in my dressing room on the set of Dynasty, the 1980s American drama series that brought back shoulder pads, tiny waists and silhouettes more flattering than an Italian waiter.

I had already completed two seasons as Alexis, ex-wife of the show’s leading man Blake Carrington, an oil tycoon, and Aaron clearly felt it was time my character moved on.

‘We’ve got five actors we’re considering to play your next husband and I want you to meet them,’ he said.

‘Oh!’ I replied. ‘You mean I get to choose?’ ‘Of course you do,’ said Aaron. ‘You’re going to be spending a lot of time with him. You’ll marry him eventually but you’ll have some ups and downs along the way.’

Before I could stop myself I blurted out: ‘I just hope he’s better than Blake…’ 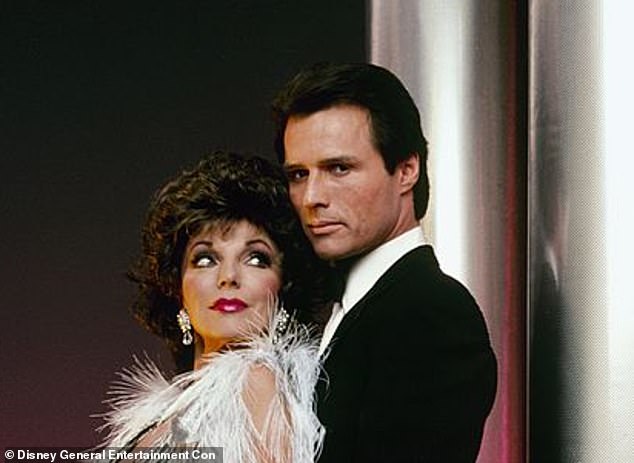 Of all my Dynasty husbands, he was far and away the best looking, the best actor and the most charming, and I was extremely happy to have married him. (Sorry, Percy!)

Blake and Alexis were constantly at each other’s throats. It’s also fair to say that the actor who played him, John Forsythe, and I were anything but best friends.

And those who might become my next husband? ‘I’ll bring them to see you tomorrow morning,’ said Aaron.

The next morning five youngish actors slunk onto the set accompanied by an assistant director and I was told to have a brief conversation with each of them.

The first one seemed a bit of a dolt, the second was too short and the third, I don’t even remember. The fourth candidate was Jon-Erik Hexum, who later became my co-star on Making Of A Male Model. I rather liked him but not as much as I liked the fifth, who I thought was mind-bogglingly handsome.

‘Hi, I’m Mike Nader,’ he said and gave me a charming lop-sided smile, which drew my attention to a tiny scar above his upper lip. It only served to make him even more attractive.

My memories of that first meeting came flooding back last Monday when I heard the sad news that Michael had died at the age of 76, shortly after being diagnosed with cancer.

The last time I saw Michael, my husband Percy and I were on a New York rooftop celebrating New Year’s Eve with friends. He looked frail and had lost his hair, but he still had that spark and charm that I remembered only too well from our first meeting.

Sizing him up as my future co-star all those years ago, I decided he was tall but not too tall. He had black hair, but not too much of it, and he had a ‘machismo’ that I thought would blend well with Alexis’s feisty temperament.

Aaron called me after lunch: ‘What did you think?’

‘Well, Nader is head and shoulders above the others,’ I told him. 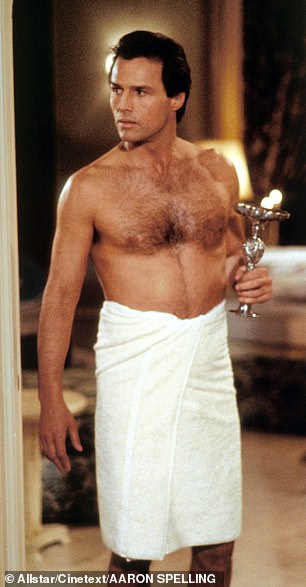 Sizing him up as my future co-star all those years ago, I decided he was tall but not too tall. He had black hair, but not too much of it, and he had a ‘machismo’ that I thought would blend well with Alexis’s feisty temperament

Two weeks later I worked with Michael for the first time. Although he was visibly nervous, he managed to control it enough to be fascinating in our first scene together.

From the moment Dex saw Alexis he was in love with her. The door to Alexis’s office was flung open and he entered as I demanded: ‘What are you doing here? Who are you?’

‘I’d still want to know why you’re here,’ I replied.

He approached me provocatively and we played our scene, which I thought went really well as we seemed equally matched.

Then at the end he plonked a kiss on my lips — a move which took me by surprise as it was not in script — before giving me a wink and sauntering off the set.

Aaron called me that night: ‘You think he’s good enough for Alexis to marry?’

‘I think he’s great!’ was my enthusiastic response. ‘I think he’s one of the best-looking men I’ve seen in a long time and he’s a very good actor. I think that our female fans are going to absolutely love him. I just hope you’re giving us some juicy scenes together.’

Over the next couple of weeks, Dex relentlessly pursued Alexis and — foolishly — she did not give in.

In either our third or fourth encounter, Dex is being his usual delightful self, giving Alexis a wonderful dinner to make up for the fact that he’s forced her to accept a bad business deal. It looks like he’s about to ‘get lucky’ when suddenly Alexis saunters to the door, opens it and turns to say: ‘Oh no, Mr Dexter. Nobody takes me to the cleaners and to bed on the same day. Goodnight!’

I never understood why it took so long for Alexis to fall head over heels for Dex. He was so charming and attractive it just didn’t seem right that she rejected him constantly.

But such is the magic of soap operas. Once the producers recognise that they have come up with a fascinating plot line that will make viewers tune in, they will milk it for all it’s worth.

This cat-and-mouse game between Dex and Alexis continued for almost the rest of that season until she finally relents and we have an amazing kissing scene.

Michael and I got a bit carried away — and he kissed me so forcefully that he bit my lip and blood was smudged on both our chins.

‘Doesn’t taste like any brand I wear,’ I retorted, running to my trailer to fix the damage.

But I really liked Michael. He was amusing and we had an easy off-set relationship.

He also had a good sense of humour. One April Fool’s Day, Michael and I were rehearsing yet another passionate love scene. Dex comes close to Alexis wearing a gorgeous silk dressing gown and suggests, smoothly and sexily: ‘Alexis, aren’t you going to open your surprise present?’ Alexis slides the dressing gown off his shoulder, equally smoothly and sexily, gazing seductively into his eyes all the while — until he is revealed to be wearing a lacy white Wonderbra over his naked chest.

Not surprisingly, perhaps, this sight caused me to flub my next line: ‘Look here, Dex, I’m a very busy man.’ The crew got more than they hoped for.

He was married and I was married but that didn’t stop some of the cast and crew teasing us that our relationship was more than friendship. But while it was purely platonic, on set it sizzled! I loved our scenes in the bath together where I would be covered in soapsuds to hide the bare necessities.

When the director yelled ‘Cut!’, Michael would try to scrape the suds off me. Not the sort of behaviour that goes down well in the #MeToo era but it was all done in good fun.

‘Joan and I are kindred spirits,’ Michael once said. ‘There was chemistry between us when I auditioned, and when we talked, I discovered what it was — we were both driven to succeed.’

He added: ‘If the relationship between Joan and me [hadn’t been] easy, I would have been written out the show a long time ago.’

I once asked him how he got the facial scar, which reminded me of one that Gene Kelly had. He said that it was the result of being hit by a drunk driver when he was six years old.

He also talked about his uncle, who was a famous actor in the 1950s called George Nader.

During his second season on Dynasty, he even admitted to having had a drug problem in his youth. I would never have guessed — he was always on time, knew his lines and was a consummate professional throughout the time I worked with him.

Alexis and Dex were finally married in 1984 and for a couple of seasons we were more or less happy. But we were always sparring with each other as Alexis would never let any man get the better of her — and he wouldn’t let any person of whatever sex get the better of him.

Then a shocking thing happened: Dex had an affair with Alexis’s daughter Amanda, played by Catherine Oxenberg. Amanda had always had her sights set on vengefully taking Dex away from her mother and when she and Dex found themselves trapped in a hut by a blizzard in New Mexico, naturally they had to have sex.

I was quite upset about this as I thought it would destroy our on-set love affair but Aaron was adamant that this subplot would increase the audience.

‘We’ve already got tons of viewers and they love the two of them together!’ I pleaded. But my views carried no weight.

One day, Michael came into my dressing room in a real state. ‘They won’t give me a raise,’ he huffed. ‘Didn’t they just give you one?’

‘Yes, they did, but it was quite small,’ I admitted.

‘You do,’ he deadpanned. I didn’t have an answer.

The on-and-off relationship between Alexis and Dex continued until the show ended. He had affairs with Leslie Carrington, Alexis’s niece, as well as with Alexis’s cousin and uber enemy Sable Colby, played by Stephanie Beacham.

When Alexis finds out about these indiscretions, she tells Dexter they are finally and truly finished. This leads to a confrontation between Alexis, Sable, Alexis’s son Adam and Dex in the last episode.

Dex, not liking Adam’s insinuations, gets into a shoving match with him and they accidentally push Alexis off a balcony!

And that was presumably the end of Alexis — as well as the entire show. But when the producers realised they had left the fans without a fitting ending, they decided to film the infamous ‘Dynasty Reunion’ two years later.

It stretched even a soap for believability. The audience discovered Dex had somehow fallen off the balcony before Alexis and she landed on top of him, killing him.

The reason Dex couldn’t be part of the Dynasty Reunion, however, was far more prosaic. He had joined the cast of U.S. daytime soap All My Children and they wouldn’t let him go. And so ended the romance that kept viewers glued to their TV sets every week for several years.

Sometime later Michael was arrested for selling cocaine to an undercover New York policeman. Unfortunately, this caused All My Children to end his contract. He went into rehab then appeared on Larry King Live to talk about his failed lawsuit to get himself reinstated.

Fortunately, his career survived and he went on to do many good things until the end of his life.

Of all my Dynasty husbands, he was far and away the best looking, the best actor and the most charming, and I was extremely happy to have married him. (Sorry, Percy!)