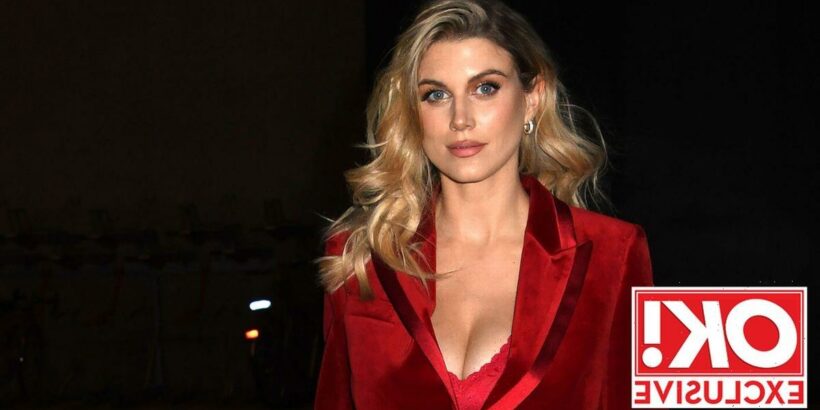 As part of OK!'s body positive special, former Made In Chelsea star Ashley James has opened up about her past struggles with accepting her body, admitting there are times when “she didn’t feel good enough”.

When we spoke to the 35-year-old, she was very open about her “love/hate relationship” with her breasts, why she had to take a stand against using filters and why becoming a mum means she’s more passionate than ever about making women feel good about themselves.

Ashley, who is mum to 22 month old Alfie and announced last month that she’s expecting her second child next year, tells us: “Body confidence is especially important to me now because I want my son to know that a woman deserves love and respect regardless of looks.

"And in a world of social media affecting the confidence of boys and girls, I want our future generation to know they’re perfect as they are.”

Having been an underwear model in the past, Ashley knows full well what it’s like to feel scrutinised. She explains: “When I was younger, especially as a lingerie model, I would feel a lot of pressure. I was so miserable about my body because I felt like it could never be perfect and people would always Photoshop it to look how they wanted it to look.

“Then I realised the irony that even the models wished they looked like the models and it dawned on me how unrealistic the beauty standards were. Nobody felt good enough.

“That’s when I took a stand against Photoshop and now I honestly don’t care if people want to judge my body because I think beauty comes from a state of mind.”

One part of her body that particularly bothered Ashley in the past is her breasts and the star, who is in a relationship with Tom Andrews, admits that she’s still learning to accept them.

“They are a part of my body that have been sexualised since I was 14,” she says. “I was really made to feel ashamed of them growing up, and was always told I had to cover up to stop attracting attention.”

Ashley admits the effect of both her pregnancies has been a challenge and breastfeeding Alf proved tricky. “I won’t lie, having babies and them [her breasts] growing so big, when they are already big, is a real mental challenge. It’s also a pity there’s so much shame associated with breastfeeding.

"Because my boobs were so big, I’d get lots of abuse for attention-seeking. We should be supporting mums – not sexualising and shaming them!”

Another thing Ashley finds difficult is that so many women are defined by their post-birth bodies. She says: “We boil postnatal women down to weight loss. It’s a shame because there’s so much more to postnatal recovery than that. It puts so much pressure on women during an incredibly vulnerable and life-altering time.”

Talking about her own post-birth body, Ashley mocks the phrase “snapped back”, saying, “It took a year for my bones to even move back – so even if I’d gone on the strictest diet and deprived myself of essential nutrition to keep my baby and me nourished and healthy, I still wouldn’t have snapped back.”

The DJ and presenter went on to open up about her mental health struggles and said her weight was the last thing on her mind.

“I had lots of complications after my childbirth and I was also suffering with sleep deprivation and depression. The way my body looked was the last thing on my mind. Lots of women, myself included, lose weight through exhaustion or not looking after themselves and they should be supported, not praised.

“Encouraging people to embrace their bodies and learn to feel body-confident is important to me – I hate that we grow up in a world that tells us we aren’t good enough, that our happiness depends on being the smallest versions of ourselves.

"It robs us of enjoying life and when you’re stuck in a cycle of diet culture it never makes you happy.”