Sharing her feelings. Asia Argento took to social media a week after the death of boyfriend Anthony Bourdain to share heartfelt lyrics about heaven.

“Look up here, I’m in heaven / I’ve got scars that can’t be seen / I’ve got drama, can’t be stolen / Everybody knows me now,” she penned on top of a screenshot of the song. “[Verse 2] Look up here, man, I’m in danger/ I’ve got nothing left to lose / I’m so high it makes my brain whirl / Dropped my cell phone down below / Ain’t that just like me?” 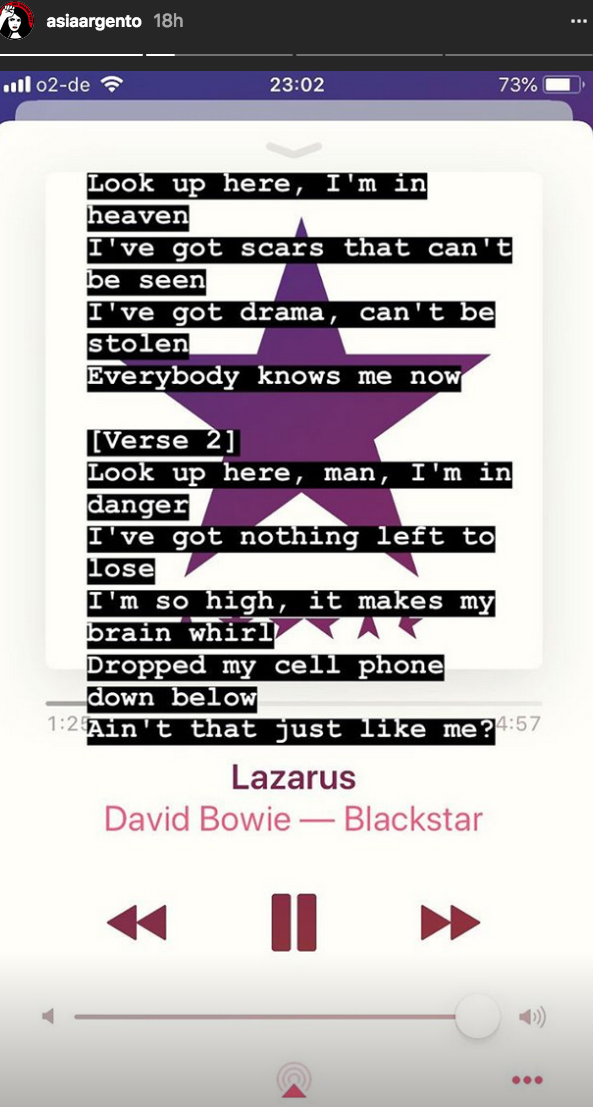 The post came after she documented a gathering of friends including Rose McGowan. “Sisterhood,” she captioned an Instagram Story on Wednesday, June 13, which showed her and her pals. She later added two posts showing a candle burning with Judee Sill’s “Jesus Was a Cross Maker” playing in the background. Sill died by suicide in 1979.

As previously reported, Bourdain was found dead on June 8. The famed TV personality, 61, was unresponsive when friend Eric Ripert found him in his hotel room in France, where he was filming an episode of his CNN show Parts Unknown. Authorities confirmed that there was no evidence of foul play, and that the celebrated author had died by suicide.

Argento spoke out shortly after his death in an Instagram post. “Anthony gave all of himself in everything that he did,” she wrote June 8. “His brilliant, fearless spirit touched and inspires so many, and his generosity knew no bounds. He was my love, my rock, my protector. I am beyond devastated. My thoughts are with his family. I would ask that you respect their privacy and mine.”

Argento and Bourdain began dating in 2017 following their collaboration on the 2016 Rome episode of CNN’s Parts Unknown.