The last time I interviewed Nicole Kidman, she invited me to visit her home in Nashville to eat fried chicken with her family. 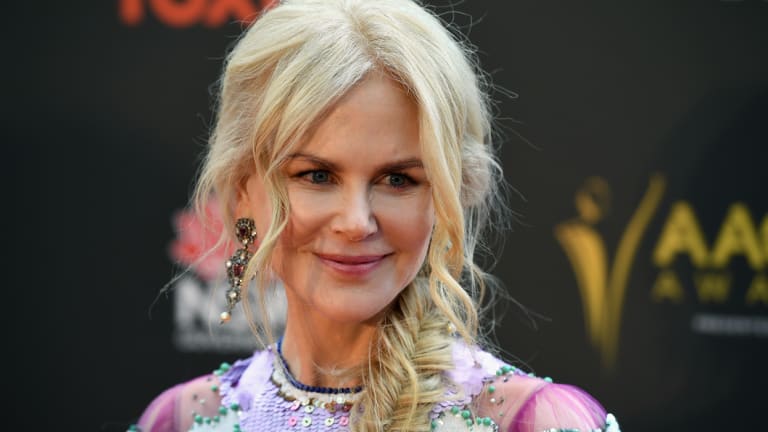 Nicole Kidman, the greatest human being Australia has ever produced.Credit:AAP

"Are you bragging, bro?" you might be asking me. Yes, I am. Do you have a standing chicken date with Nicole Kidman? I do. But I'm also making a greater point, that Kidman is a wonderful human being, probably the only great human being Australia's ever produced.

She's proved as such in recent weeks, during a substantial trip back to Sydney that included acting as supportive wife to Keith Urban while he hosted the ARIA Awards, and then at the AACTA Awards, where she claimed the Best Supporting Actress prize for her role in Boy Erased and dedicated the win to the local industry that "birthed me, nurtured me, built me".

There were also paparazzi pics captured of her and Urban reportedly shopping at Kmart and dining at a food court KFC in Chatswood. She really loves fried chicken, what can I tell you?

It's been a gracious tour, and far removed from the persona she'd awkwardly developed in the past, before Big Little Lies re-affirmed her as an audience favourite. It was mere years ago, for example, that tabloids were labelling her an "ice princess", scrutinising her "ageless" visage, or revelling in the critical drubbing of Grace of Monaco.

At 51, Kidman's still at a peak, set to feature heavily in awards season with her roles in Boy Erased and Karyn Kusama's cop-drama Destroyer, and a superhero tentpole in Aquaman out this month (20-odd years after her other underrated DC tilt, Batman Forever).

And that's just in front of the screen. On the production side, she's embraced a role as mentor to young women in the industry.

"The sharing of information is so important," she recently explained to the Hollywood Reporter. "Working with younger actresses, I say, 'Ask me anything and I'll answer. Ask me anything financially. If you need advice, just ask. I can only tell you what I advise and you might take it or leave it. But it's nice to have access to information.'"

That's quite generous, and conjures a nice image of young co-stars such as Elle Fanning and Angourie Rice walking up to Kidman on-set with their Dollarmite statements.

So what am I suggesting? A belated apology, perhaps. "Forgive us Nicole, for we did not know what we had for so long, you are truly wonderful." A greater appreciation, at least. Something more tangible, though.

Bryan Brown's got a theatre named after him in his early kicking ground of Bankstown; Kidman deserves her own monument in (quickly checks Wikipedia) Lane Cove. Maybe a skate park, a playful nod to her BMX Bandits debut. Or a fried chicken shop, so I don't have to travel 14,799 kilometres for that lunch date.