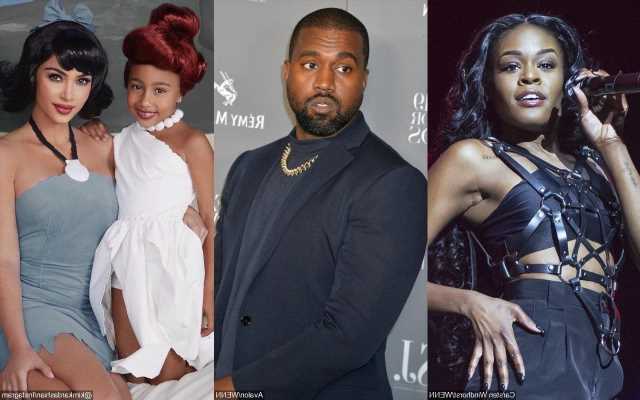 In her lengthy rant against Ye, the ‘Anna Wintour’ raptress sides with the SKIMS founder as she calls the Atlanta emcee ‘an abusive psychopath’ and drags his girlfriend Julia Fox.

AceShowbiz –Azealia Banks is another celebrity who has weighed in on Kanye West and Kim Kardashian drama. Defending the reality TV star for letting her daughter North on TikTok, the female hip-hop star fiercely slammed Ye for bullying his daughter and trash talking his estranged wife on social media.

The “Black Madonna” femcee shared her take on the estranged couple’s situation in a lengthy message on her Instagram Story. “Y’all are making way too many excuses for Kanye,” she began. “This is the second time he has publicly bullied North West. First with the abortion s**t, and now putting her on blast on his Instagram page as if she’s some sort of criminal.”

She continued, “Kanye had no problem with that magazine cover where North had on a f**king belly top and purple eyeliner with her little buds showing thru the shirt, he thought it was fashion. You all said nothing.”

Azealia claimed Ye is trying to “wreck the mental health” of Kim “while he galavants the streets with industry interns, druggy slut bags, eating dirty steaks at Les Dive bars, and is clearly having rapid opiod/heroin comedown/withdrawal type outburst.” She went on blasting his fans who supposedly tried to justify his antics as “a mental health issue.”

“This is p***y a** deadbeat abusive black man s**t and all you n***as trying to keep the cycle of plantation style shaming and embarrassing young black children for being kids, are what the f**k is wrong with this toxic a** culture,” so she stated.

“Trying to accuse a mother of kidnapping her own child????” the 30-year-old continued. She then appeared to mock Kanye’s now-girlfriend Julia Fox as writing, “Was Chicago supposed to be hanging out with him and Julia’s horrible cool sculpting while they get drunk and high so Julia can blow vape pen smoke in Chicago’s face?

“Maybe North is looking for a fun escape because she has to look online and see her dumb a** dad always talking s**t about her mother,” she argued, “and when Kim won’t give him the attention he begs for he turns his anger on her by posting her picture to his Instagram talking about ‘his will’ as if she is a f**king piece of property and not a young black girl just trying to be happy.”

“Kanye is an abusive psychopath, it’s beyond mental illness,” she insisted, before concluding her message, “Stop trying to help him and start trying to help the poor child that he keeps on trying to embarrass and abuse publicly to garner sympathy for his ashy a**.”

Azealia’s lengthy rant against Kanye comes after the latter claimed Kim prevented him from taking their kids to Chicago to see a basketball game. He also said that Kim accused him of putting a hit out on her.

Despite his complaints, Ye has been reunited with his children. On Sunday, February 6, he was seen with all of his four kids at an event in Los Angeles, without Kim being anywhere around them.