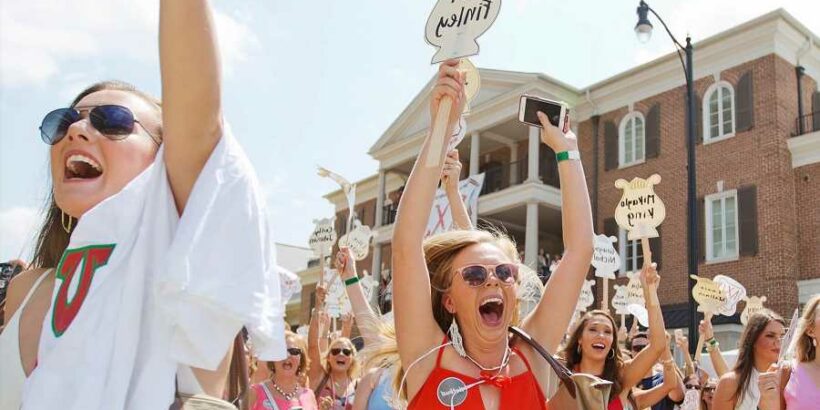 Last year, if you spent any time on TikTok, your For You page was likely overrun with videos from flaxen-haired sorority girls named Grayson, Brayson and Kaydynn showing off their Shein pastel minidresses and “normal” jewelry in preparation for rush week. It’s once again that time of year where thousands of prospective sorority girls take to TikTok to become momentary viral sensations as part of Bama Rush Tok.

Essentially, Bama Rush Tok consists of countless videos of University of Alabama pledges (known as PNMs, or prospective new members) doing various outfit-of-the-day videos for their week-long rush, activities including philanthropy day (where you go to various sororities and see what charities they support) sisterhood day (where you tour various sororities) and finally Bid Day, where you learn if any have made you an offer. Other videos featured PNMs showing off what’s in their Rush Week bags, or documenting their exhausting social schedules.

The videos went massively viral for a few reasons. One explanation was that many of the commenters appear to be outside the United States, where depictions of Greek life are few and far between. Further, many were struck by the uniformity of the young women in the videos, who tend to wear the same Shein minidresses, the same wedge sandals, and have the same flat-ironed white-blond hair. (Occasionally there’s a brunette, the sight of which is so unique that it’s likely to induce fever dreams in the regular viewer.) This homogeneity isn’t particularly surprising at the University of Alabama, where sororities were apparently only officially desegregated in 2013, and many have commented on the racism and classism inherent in many of these videos (the Greek life system is also incredibly expensive to participate in, with dues at ‘Bama in particular costing up to five grand per semester).

People became incredibly invested in Bama Rush Tok, with certain parts of these videos rapidly becoming memes — particularly the lines they use when identifying the provenance of items in their outfit, such as the phrase “the jewelry is normal,” or identifying non-pants items sold at the Pants Store, which turns out to be an Alabama-based clothing store chain. Some of the PMs also became stars in their own right, such as one minor TikTok celebrity, Makayla Culpepper, who broke thousands of viewers’ hearts when she revealed she’d failed to receive a bid from any sorority that year, sparking a slew of incendiary rumors as to why.

Now, as the start of the academic year gears up, Bama Rush Tok is once again starting in earnest — and people on TikTok couldn’t be more excited. “I don’t know what these videos have to do with the life of a 33-year-old Canadian or whether they contain subliminal mind control techniques,” said one woman in a TikTok. “but all I know is that this is my Super Bowl, sorority rush time, whether it’s at Alabama University [sic] or any similar university, anything where we’re gonna get a clothing haul from the Pants Store or Shein or Lulu’s, I have not known true joy since this time last year.”

This week on Don’t Let This Flop, Rolling Stone‘s internet culture and news podcast, host Ej Dickson and DLTF executive producer/Rolling Stone senior culture editor Liz Garber-Paul (filling in for cohost Brittany Spanos), discuss the triumphant return of Bama Rush Tok, as well as media coverage of Nazi furries, why #PrinceOfPegging is trending, the indie film darling that led our guest of the week to have her first orgasm, and Himbo of the Week Kevin Bacon.