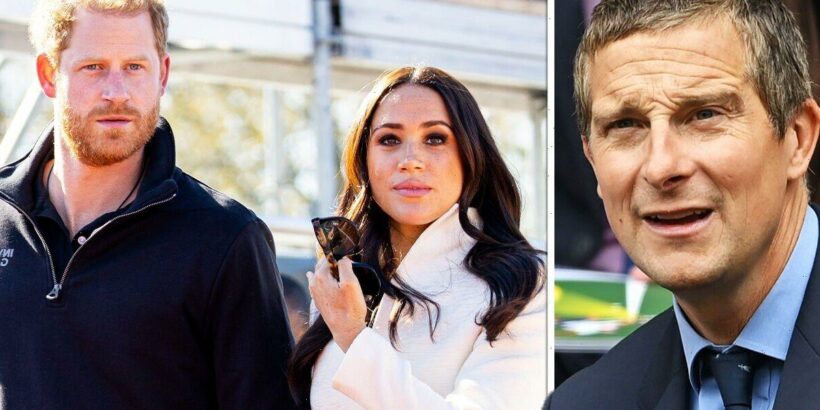 Adventurer and explorer Bear Grylls has teased his NBC show Running Wild has to make its “biggest announcements” yet as he starts filming the latest series. Speaking exclusively to Express.co.uk, the TV star, 47, wasn’t giving anything away when asked if he’d like to feature the Duke and Duchess of Sussex on the next series of his adventure programme.

That would be a great one

Bear replied: “Well, you know, we’re not announcing anything yet.

“We have probably our most amazing guests we’ve ever had on Running Wild coming up this year.

“We’ve got probably our biggest announcements for Running Wild.

“So yeah, nothing official to say yet,” he added.

He went on to address the prospect of environment campaigners Harry and Meghan appearing on the show, which has previously seen the likes of former US president Barack Obama take on the elements.

Bear said: “That would be a great one and talk about stuff that, you know, the environment is so key.

“You know, not just young people, so that message is always front and centre for us and Running Wild anyway, because we live in these extremes.

“We were in these extremes all the time.

“We’ve seen the hard, ugly side of climate change close up all the time when we’re filming.

“So yeah, we’re always proud to champion that message,” he added.

The popular programme has featured some famous names including the likes of Hollywood actress Julia Roberts and tennis champion, Roger Federer.

Speaking about the celebrities on the show, Bear said: “We always get these great guests, we try not to jinx it beforehand by announcing them.

“But I think the reason we get these sorts of guests is that they don’t need the fame or the money.

“You know, they’re not there for that, they’re there for what the wild can give them,” he explained.

“You know, what challenge and what adventure can give them we should sort of pride you know, light in their eyes,” the explorer added.

Elsewhere in the interview, Bear admitted that it was “nerve-wracking” to launch his family festival for the first time since the Covid pandemic.

He said: “I think it’s been a pretty tough couple of years to launch a Festival and it was always a nerve wracking thing, but it had incredible support from so many people.

“I think families are hungry for an adventure type festival in a safe space where they can enjoy making music, making food and get access to fresh experiences and so many cool adventures.

Gone Wild Festival is on from 25 – 28 August. Tickets are available to buy here.