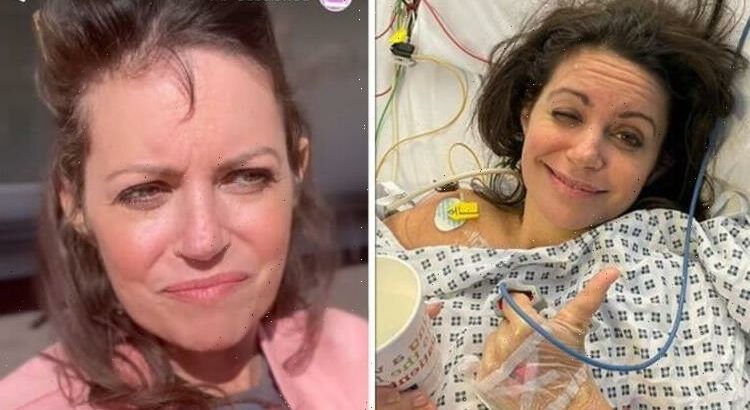 Deborah James discusses having to remain in hospital

BBC podcast host Deborah James has taken to Instagram to share an update as she continues to recover from sepsis. The mother-of-two, 40, revealed she developed the life-threatening reaction to an infection earlier in the week, resulting in her becoming “really unwell” and being admitted to the Royal Marsden Hospital for treatment over the weekend.

I’ve basically been out of it with sepsis

In view of her 396,000 followers, the star told how she’s only just starting to feel better after developing the infection on Tuesday.

Chatting to her fans on stories, Deborah said: “Hello! I know I haven’t been on here for a while.

“I’ve basically been out of it with sepsis.

“It feels like the last 10 days have been an utter blur of medication and procedures and everything and I’m only really coming back into my own head,” she explained.

Deborah went on: “But thank you for your gorgeous messages and sorry I haven’t engaged with it.

“Thank you also to all the kind, kind strangers and friend who have kindly sent me stuff here.

“Like, when you can’t get out and see fresh air and flowers it’s just incredible so thank you,” she said.

Deborah continued: “So this is kind of such a novelty for me.

“So I am well enough to be allowed down, obviously I can’t leave the hospital at the moment because basically, I’m still on some hardcore antibiotics to ensure that my sepsis stays away.”

Deborah later shared a post detailing the difficult realities of her treatment.

She wrote: “So as much as I want to sit outside all day, I have around 14 hours of continuous IV treatment each day at fixed times and that’s without a procedure day such as removing septic ports!

The star went on to add despite wanting to get home she needs to get herself feeling strong again to continue her active cancer treatment.

“Normally I’d be pushing to get home: but I know we need to really get my body strong again, as I’m still having active cancer treatment and the regime for certain infections take a long time to control!

“But one step at time right,” she added.

Deborah’s update comes days after she told her followers she “sobbed uncontrollably for an hour”.

She explained after having a port in her chest removed, she had a peripherally inserted central catheter line (PICC) line inserted into her arm.

PICCs administer chemotherapy treatment and other medicines to patients and Deborah joked it now had to “feed her up like a Christmas Turkey”.

But getting it inserted was a tough ordeal for Deborah, who was rushed to hospital after developing sepsis.