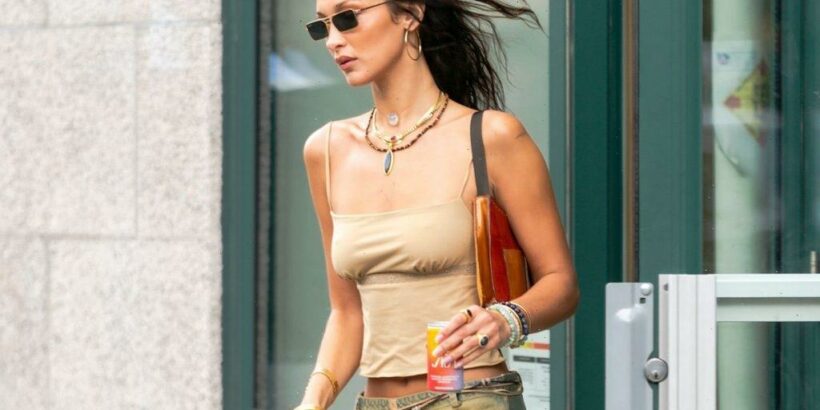 You might be surprised to learn that Bella Hadid, the co-founder of the sleek, non-alcoholic beverage company, Kin Euphorics, didn’t take part in her first “dry January” until 2021. But sobriety isn’t a trend for Hadid, who’s admitted to experiencing the negative effects of drinking too much.

The 25-year-old stopped drinking in the spring of 2021. For her, dry January isn’t much different from any other month. She enjoys the ritual of drinking Kin Spritz or Lightwave, another favorite, and likes the positive effects Kin has on her mood.

Kin Euphorics was a lifesaver for many sober-curious celebrities and non-celebrities during dry January. Interest in the product, as well as its growing positive reputation, caused Victoria Hoff to review Kin in The Thirty‘s Who What When Where column.

Hoff found the concoction mildly intoxicating but in a non-alcoholic way. She noticed that if she drank Kin during her work hours, her productivity and memory improved. Likewise, when she experimented with drinking it in social settings without consuming alcohol, she noticed that she was able to engage with people and have a good time without feeling fatigued the next day.

You might wonder how Kin Euphorics can act as both an energy boost and calming agent. It does seem a bit paradoxical. But the beverage’s inventor explains that certain ingredients can affect people in different ways.

Kin is a combination of botanicals, nootropics, and adaptogens

Adaptogens are organic compounds found in a variety of mocktails. They occur naturally in herbs and certain mushrooms and have been known to provide resistance to stress. Nootropics are similar but they do not naturally occur in herbs and mushrooms. Rather, they are compounds that help stimulate dopamine and serotonin receptors. These receptors alert people’s cognition and also help improve their mood. Kin’s botanicals provide flavor as well as atmosphere.

Hadid likes to drink a Kin Spritz in the morning as a replacement for coffee. It keeps her energized and helps with cognition. The drink also helps the supermodel overcome social anxiety, an issue that has long plagued her. Recently,Hadid has found “her voice” as well as a sense of confidence.

Still, in the evening,Hadid chooses to unwind with Kin’s Lightwave beverage, which contains deeper flavors and has been compared to wine. Lightwave relaxes her and helps her sleep.

Jen Batchelor, the co-founder of Kin Euphorics, describes it as a beverage that fills a “white space between playfulness and wellness.” In other words, you can still have fun and reduce social anxiety but you won’t get a hangover.

Bella Hadid came onboard in 2019

Batchelor started Kin Euphorics as a “social tonic” in 2018. She noticed that many of her friends enjoyed wine alone as a way to relax. They included it as part of their self-care ritual. Batchelor thought it would be a good idea to put “social” back into the drinking experience but still keep the idea of self-care. She decided to create Kin as a way to celebrate a “brain care ritual” rather than a typical social drinking ritual.

Hadid came on board in 2019 after her own interests in sobriety and self-care led her to the product. Kin is part of her everyday life. So it only made sense for the entrepreneurial supermodel to become a co-founder of the reinvigorated brand Kin Euphorics.