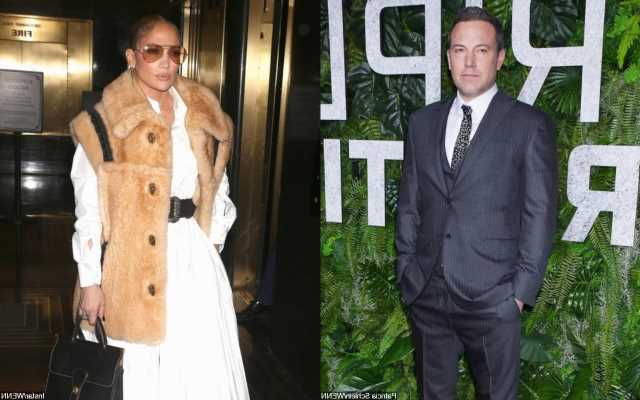 The outing comes just two days after the ‘Gone Girl’ actor and the ‘Shotgun Wedding’ actress stepped out with Emme and Samuel to go shopping in Los Angeles.

AceShowbiz –Ben Affleck has just given Jennifer Lopez a break from her mommy duty. On the weekend, the “Zack Snyder’s Justice League” actor was caught on camera hanging out with his two children and his rumored girlfriend’s daughter, Emme.

On Sunday, July 11, the 48-year-old dad was photographed with his son Samuel, his daughter Seraphina and J.Lo’s daughter Emme at the Universal CityWalk in Los Angeles. In pictures surfacing online, the groups could be seen having their hands full with some snacks and drinks.

Just two days prior to that, Ben and J.Lo were captured going to the Brentwood Country Mart with their respective kids, Samuel and Emme. The couple was seen very touchy during the outing as they wrapped their arms around each other.

The “Shotgun Wedding” actress opted to go with white ensembles for the outing. Her former fiance, on the other hand, kept it casual by wearing a gray T-shirt, jeans, white sneakers and a pair of sunglasses. He completed his look with a black face-mask.

This came after J.Lo and Ben spent Fourth of July weekend at Hollywood’s Universal Studios together along with Emme, her twin Max as well as 9-year-old Samuel. The alleged couple appeared to have a great time together as they were spotted smiling ear-to-ear while exploring the theme park.

J.Lo and Ben sparked reconciliation rumors in April, just days after she confirmed her split from ex-fiance Alex Rodriguez. The lovebirds’ relationship apparently has been met with approval from the “Let’s Get Loud” songstress’ children. A source told E! News earlier this month that “her kids really like Ben and think he’s funny and fun to be around.” The source added, “He’s totally won the family over with his charm.”

J.Lo’s mom Guadalupe Rodriguez was also reportedly “thrilled” about her rekindled romance with Ben. “In the past, Jennifer’s mom and Ben were very close. Guadalupe loved Ben. She was sad when they couldn’t work things out years ago,” a source spilled to PEOPLE in June. “She is thrilled that they are back together now.”