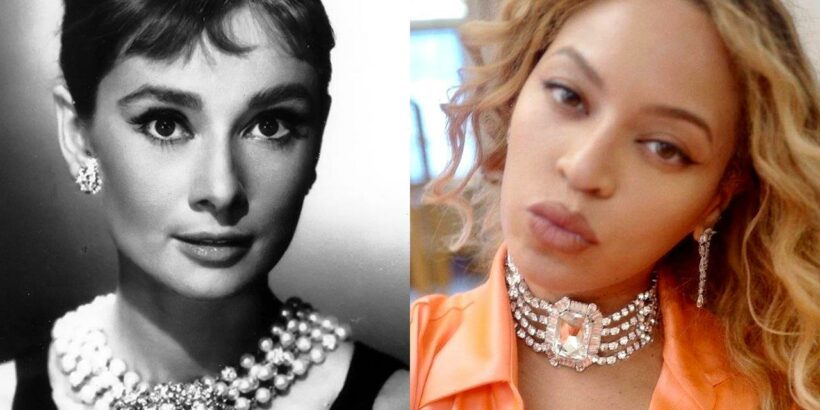 In the 90-second clip directed by Emmanuel Adjei, the ‘Lemonade’ hitmaker serenades her husband Jay-Z with Academy Award-winning song ‘Moon River’ from ‘Breakfast at Tiffany’s’.

AceShowbiz –Beyonce Knowles is paying tribute to classic Audrey Hepburn film “Breakfast at Tiffany’s” with her new ad for the high-end jewellery company.

The “Lemonade” hitmaker channels the spirit of the beloved 1961 movie’s star, who earned a Best Actress Oscar nod for playing Holly Golightly, and serenades husband Jay-Z with the film’s Academy Award-winning song, “Moon River”. And she’s going all out to emulate Audrey’s fabled look, wearing a black gown with a blonde-highlighted updo.

In the 90-second clip, directed by Emmanuel Adjei, which serves as the official visual for the “About Love” campaign, Beyonce also sports a white fur coat and a square-shouldered all-white suit while aboard a plane – and the famous 128.54-carat Tiffany yellow diamond, among other jewels.

Tiffany and Co. publicists describe the footage as “stripped down and raw, capturing the Carters’ indescribable chemistry through stolen moments of intimacy,” adding it tells “a story of longing and reunion – a bond that transcends space and time.”

As in the previously released print advertisements, a painting by late renegade artist Jean-Michel Basquiat is featured in the background. The superstar couple’s use of the piece, “Equals Pi”, has outraged friends of the painter, like Alexis Adler, who told the Daily Beast earlier this month (September 2021) she was “horrified” to see it in the ad, even though Tiffany and Co. bosses own the artwork.

“Why show it as a prop to an ad?” she raged. “Loan it out to a museum. In a time where there were very few Black artists represented in Western museums, that was his goal: to get to a museum.”

There have also been reports that Tiffany and Co. officials’ iconic signature jewel was sourced unethically, making it a “blood diamond.”

Beyonce and Jay-Z have yet to address the controversies.