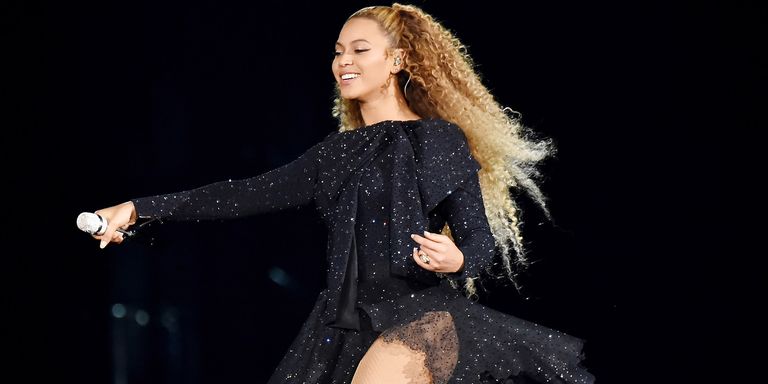 Beyoncé is super-human, even in the stickiest of situations.

Over the weekend, Beyoncé performed with hubby Jay-Z in Warsaw, Poland during their On The Run II tour. After finishing the last song, Beyoncé found herself stuck on a floating platform stage after a technical malfunction.

In videos posted by concert goers, Bey and her stage crew figure out how to safely get her down from the stage. They eventually bring her a ladder, which she climbs down without missing a beat. And, she does it all in a black sequin leotard and thigh-high heeled boots. Can you say QUEEN?

Beyoncé and Jay-Z perform their “Young Forever / Perfect” mashup duet as the final song, thank the crowd, and the credits begin to roll. But there’s nowhere for Bey to go, and stage crew can be seen rushing to help.

Bey didn’t miss the opportunity to have fun and entertain the audience. As the crew is setting up her escape route, she danced, blew kisses, and waved to the crowd below.

Fans even encouraged her from below as she hesitantly looked down the ladder, yelling “you can do it!”

Bey made it down safely and waved to her fans as she walked backstage.

This is just one of the amazing moments captured from the crowd during the OTR II tour. Concert goers have shared everything from Beyoncé’s epic costumes, behind-the-scenes videos from Beyoncé and Jay-Z’s vow renewal, and first looks at twins Rumi and Sir. They’ve also snapped videos of Blue Ivy shielding her eyes from NSFW videos during her parents’ set. Talk about an epic show.