Black Eyed Peas member Will.i.am claims a Quantas flight attendant had it out for him because he’s black … this after a confrontation that ended with a police escort.

The rapper was on a flight from Brisbane to Sydney when he says the flight attendants were preparing for landing and asked passengers to store their electronic equipment. Will.i.am says he was using his laptop but didn’t hear the announcement because he was wearing noise-canceling headphones. 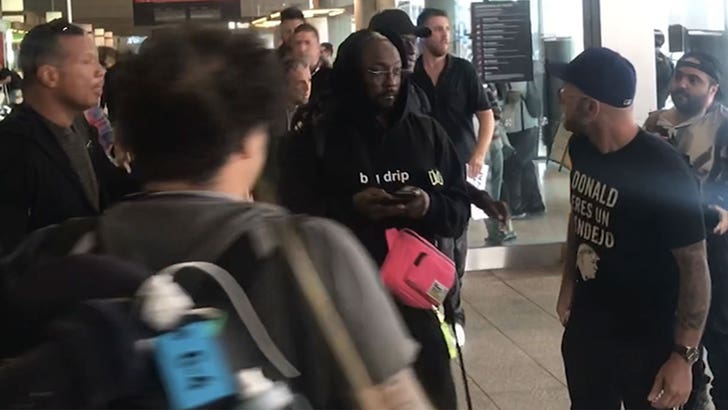 He claims the flight attendant unloaded on him and someone on the flight — presumably the pilot — called ahead for cops to meet the plane when it landed. Will.i.am was escorted off the plane by 5 officers.

He tweeted, “I’m currently on a flight from Brisbane to Sydney.” “I’m sorry to say me and my group have experienced they worse service due to an overly aggressive flight attendant… I don’t want to believe she racist. But she has clearly aimed all her frustrations only at the people of colour.” 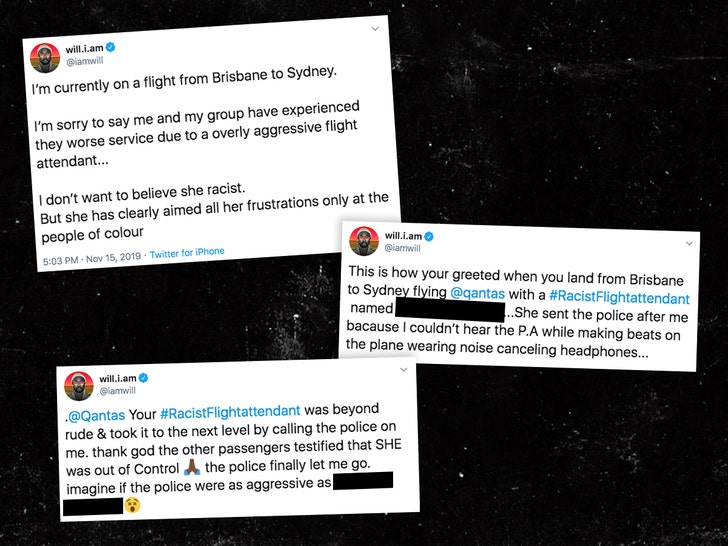 Will.i.am then posted a photo of one of the cops who met the plane, saying “@Qantas I was making music wearing noise cancelling headphones on the plane… I’m sorry I couldn’t hear the P.A…I complied when she’s tapped me on the shoulder to put my laptop away… It’s sad that your #RacistFlightAttendant sent the police…”

He wasn’t finished: “This is how your [sic] greeted when you land from Brisbane to Sydney flying @qantas with a #RacistFlightattendant. She sent the police after me because [sic] I couldn’t hear the P.A while making beats on the plane wearing noise cancelling headphones…”

He expressed gratitude to the passengers who took his side … “Your #RacistFlightattendant was beyond rude & took it to the next level by calling the police on me. thank god the other passengers testified that SHE was out of Control. the police finally let me go. imagine if the police were as aggressive as [flight attendant].”

Will.i.am got mixed reviews for posting the name and badge number of the flight attendant.

He said, “If I did something wrong….or if I was the slightest bit rude to a FAN or a journalist during work, I would be publicly named…this is what Twitter is for…we are supposed to call out wrong doings so we can have a safer more compassionate world.”

A Qantas spokesman told The Independent: “There was a misunderstanding on board, which seems to have been exacerbated by will.i.am wearing noise cancelling headphones and not being able to hear instructions from crew. We completely reject the suggestion this had anything to do with race. We’ll be following up with will.i.am and wish him well for the rest of the tour.”