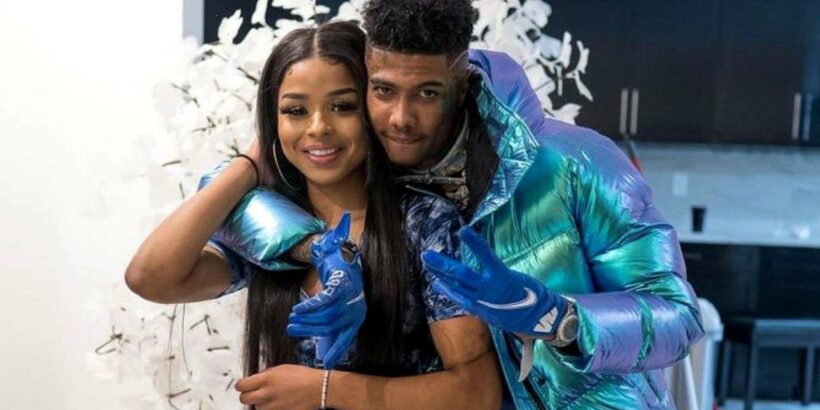 Addressing Chrisean’s claims that he beat her up which she has since retracted, the ‘Thotiana’ rapper insinuates things could have been worse had he not restrained her from jumping out of a moving car.

AceShowbiz –Blueface has broken his silence on his girlfriend Chrisean Rock‘s facial injuries. After she backtracked on her own claims that he physically assaulted her, the rapper echoed her clarification that he actually wanted to save her when she was trying to jump out of a moving car.

In some since-deleted tweets posted on Monday, October 31, the 25-year-old insinuated that things could have been worse had he not restrained Chrisean from jumping out of a moving car. “Idk how y’all by passing her tryna jump out a moving car on the hwy in Gary indiana a little bloody nose an lip is save compared to the injuries she would have really sustained,” he tweeted.

“Pray for rocks mental health if you actually care,” the Los Angeles-born star pleaded with his followers, while insisting that his girlfriend is “perfectly fine physically.”

In a separate tweet, Blueface said, “Tryna hold rock down is a bull ride she ain’t no weak b***h clearly y’all ain’t watched her go against baddies south security.”

Chrisean initially accused Blueface of beating her up because she had been texting a boy. Hopping on Instagram Live to show her “busted lip” and “busted nose,” the reality TV star claimed, “He gone pull me back just to hit me in my mouth because I wanted to jump out the car.”

In the video, a man’s voice can be heard in the background, saying, “I hope y’all can work on this.” In response, Chrisean yelled, “No!” repeatedly. “I’m drunk, and you’re being a b***h… you’re too comfortable and keep hitting me in my face,” she went on stating with a quivering voice.

Several hours later, Chrisean retracted her claims. “everybody fine. No filter, no makeup,” she said in a video posted on her Instagram Story, while wiping her face, which didn’t show signs of significant injuries, to prove that she didn’t conceal anything.

“I had a bad trip yesterday,” Chrisean went on to say, adding that she was trying to jump out of a moving car and her boyfriend actually tried to save her after she blacked out on Casamigos. “Trynna jump out of a f**king moving car on a highway, Blue tried to keep me from jumping out the car.”

“I fought that n***a, like, trynna get the f**k up out the car,” she continued of her on-and-off boyfriend. “He’s trying to save me, and I just blacked out.”

She captioned the Story with the text, “Sorry guys I had a mental breakdown/bad trip with the liquor.” She also promised to work on her “mental health” and “liquor habits” following the incident.

However, many were not convinced with Chrisean’s clarification and accused Blueface of forcing Chrisean to lie for him. “This is normal behavior of a domestic violence victim,” one person opined. “Please before you leave mean comments just pray for her don’t judge her cause she not even in her right state of mind. It’s so much more then just the physical abuse. He’s psychologically trained her to feel like she has no way out. And the mean comments don’t help at all.”

Fashion designer and rapper PreMadonna simply commented with, “Lies,” while London-based artist BIA weighed in, “pray for them both!!” Bravolebrity Marlo Hampton also wished the best for the couple as she left some praying hands emojis.