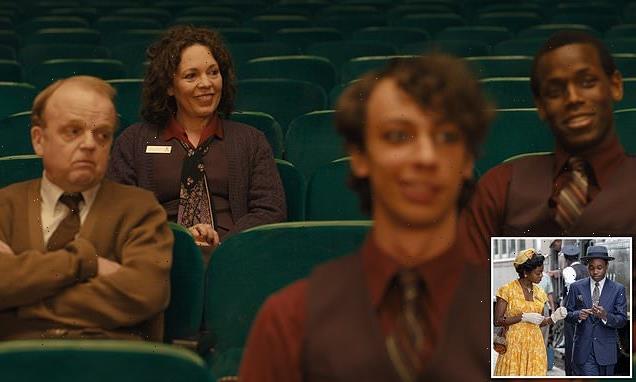 BRIAN VINER: Take a seat for Mendes’ ode to cinema in the Eighties (Toffets not included)

When I read that Sir Sam Mendes’s new film ransacks his memories of going to the cinema as a boy, I lit up as though illuminated by the beam of an usherette’s torch.

We’re a similar age and I loved the idea of a nostalgia trip back to 1980, before the old Art Deco picture palaces were turned into bingo halls.

After all, Mendes is an accomplished story-teller, and the cast list alone will make your spirits lift like a Wurlitzer organ rising from the orchestra pit: Colin Firth plays the pompous manager of the Empire cinema, Margate, with Toby Jones as the devoted projectionist and, at the top of the bill, Olivia Colman as a long-serving duty manager.

When I read that Sir Sam Mendes’s new film ransacks his memories of going to the cinema as a boy, I lit up as though illuminated by the beam of an usherette’s torch

Yet Empire Of Light ends up as a mild disappointment. It’s the first time the illustrious director has had a writing credit to himself, and he could have done with a restraining hand on his arm.

His story encompasses mental health, loneliness, marital infidelity, far-Right racism and social deprivation, and to use a football pools expression from that era, I’d have been happy to perm any two from five. Together, it’s a bit much.

Before long, he and Hilary are in a relationship, which begins to falter when her psychological frailties emerge. Meanwhile, the Empire gears up for the ‘South Coast’ premiere of Chariots Of Fire, with the champion runner Steve Ovett expected to attend.

C an the premiere get to the starting line before Hilary’s mental health caves in? Will Stephen survive the rancid attentions of National Front thugs? I’d have been more invested if I’d believed entirely in their sexual and emotional connection, which I didn’t, quite, despite the sustained excellence of the acting.

Still, rather like Steven Spielberg’s forthcoming film, The Fabelmans, and in common with 2021’s Belfast by his fellow knight Sir Kenneth Branagh, Mendes has made a deeply personal film, which is intriguing in itself.

He says the character of Hilary was informed by his mother’s struggles with mental illness when he was a boy.

He also shows, movingly, how a community (in this case the cinema staff) can rescue a lost soul. And some scenes reminded me of the 1988 charmer Cinema Paradiso; an eloquent love-letter to those old picture houses and the craft of showing films. 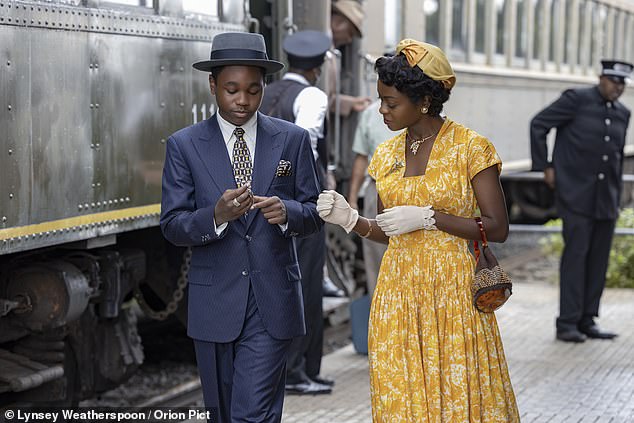 Till is another period drama, which also examines the terrible taint of racism on a society, but with a story that is all too heartbreakingly true

So there’s plenty to like. With the help of master cinematographer Roger Deakins, Mendes ably brings a bygone age to life, using packets of Toffets (remember them?) and films such as Gregory’s Girl to whisk us back in time.

And yet, whether anyone will look back as fondly on Empire Of Light as we now do on Gregory’s Girl, I respectfully doubt.

Till is another period drama, which also examines the terrible taint of racism on a society, but with a story that is all too heartbreakingly true.

Emmett Till was the 14-year-old African-American boy from Chicago, who in 1955, while visiting relatives in small-town Mississippi, was tortured and lynched for the ‘crime’ of allegedly whistling at a white woman. His broken body was then dumped in the Tallahatchie River.

That much will be known already to anyone with even a passing interest in the history of U.S. civil rights. I studied it at university in Atlanta, Georgia, yet I confess I didn’t know anything, until watching Till, about Emmett’s mother, Mamie (brilliantly played by Danielle Deadwyler, with Whoopi Goldberg in a cameo role as his grandmother).

In the depths of grief, Mamie found the energy to campaign, insisting her only child’s coffin be left open so that thousands of mourners could see what had been done to him.

Chinonye Chukwu’s stirring film begins in Chicago, where racial prejudice is not unknown. In a department store we see Mamie and her ebullient son, known to the family as Bo (engagingly played by Jalyn Hall), directed to the basement by a snooty assistant.

But Mamie is about to wave Bo off to the Deep South, warning him repeatedly that race relations are ‘different’ down there.

Once he’s gone she cannot shake off a horrible sense of foreboding that something will go wrong, and actually this is done a little heavy-handedly, a slightly clunky layering of what did happen over what, in the narrative, is yet to happen. Mamie is perhaps also made out to be more eloquent than she was. ‘He came home to me reeking of racial hatred,’ carries the click of a screenwriter’s keyboard, not the ring of authentic dialogue.

Never mind. This is a powerful film, and while we don’t see Bo’s murder, the spectacle of people shuffling past his coffin might be the most heart-rending cinematic image of the year, even with so much of it still to come.

Empire Of Light is in cinemas from Monday. Till is out now.

This film, starring Tom Hanks in the title role (left), was released on Christmas Day in the U.S. That makes some sort of sense, because Otto is a latter-day Scrooge, a curmudgeonly widower recently forced into retirement and known throughout his suburban neighbourhood for bad-temperedly policing the streets.

Then a Hispanic couple move in opposite (the Cratchits, basically), and despite his habitual antipathy, it quickly becomes obvious that they will offer Otto a wiggly path towards redemption.

First, though, we must suffer his repeated attempts to take his own life, which are undermined by a series of dramatic contrivances that get ever more wearisome.

Otto is not a bad man, of course, and flashbacks to his younger self (played by Truman Hanks, Tom’s son) show that he was once quite sweet.

In fact, sweet is the key word, because the movie gets increasingly saccharine, like being forced to drink a mug of tea with a new lump of sugar added every time you take a gulp.

Fifty years ago, Otto might have been played by Walter Matthau; 20 years ago, by Bill Murray.

Cast defiantly against type, Hanks gives it his best shot — which is better than most people’s best shots — but Marc Forster’s film never matches the 2015 Swedish picture that inspired it, A Man Called Ove.

And that, in turn, wasn’t as good as the original and witty 2012 novel of the same name, which started the whole ball rolling inexorably towards this forgettable mush.