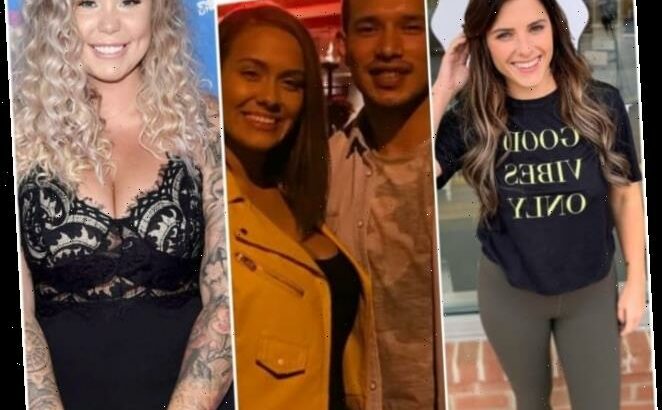 As you’ve probably heard by now, Javi Marroquin and Lauren Comeau have broken up yet again.

And this time, it looks as though they’ve called it quits for good.

Or more accurately, it looks as though Lauren has finally gotten fed up with Javi’s cheating, and she’s done giving him second chances.

But what initially looked like a fairly straightforward case of boy meets girl, boy repeatedly cheats in girl, boy loses girl, has since turned out to be something far more insidious.

Yeah, it was pretty insidious to begin with, what with Javi banging everything in sight while his fiance stayed at home with their baby, but trust us, it gets worse …

In a recent Instagram Live session, Lauren alleged that Javi and Kailyn Lowry have been carrying on an affair for years.

That means the entire time that Javi was with Lauren — a period during which they bought a house together, got engaged, and had a kid — he was regularly hooking up with Kail.

Needless to say, Lauren did not take this news well.

“It’s just really  f–king upsetting that two people can still be ok with causing people this much pain,”  she told the camera.

“It’s really f–king upsetting. I’ve had my fair share of betrayal and pain my whole life but what I learned today, from the kids nonetheless, just makes me feel like the last three years they’ve just been waiting for this,” Comeau continued.

Yes, adding insult to injury, Comeau learned of Javi’s infidelity from his own son.

Hopefully, these kids will force their parents to pay for their therapy once they hit adulthood.

Anyway, believe it or not, the twists and turns didn’t end there.

Earlier this week, Kail implied that Lauren cheated on Javi, which drove him in into the arms of another woman (presumably Kail).

See? When we told you this situation was a complicated mess, we meant it.

How to make sense of such a tangled web of deceit and betrayal?

Well, fortunately, there’s one person who’s dealt with most of the principal players on a fairly intimate level, but has kept enough distance from the current controversy to maintain her objectivity.

In one of her recent Instagram Live sessions, Lauren stated that as a resuly of her breakup, she’s “stuck in Delaware,” living the life of a  “single mom” without any help from her family and friends.

(Lauren is originally from Maine, and she moved to Delaware to be with Javi.)

“Damn I would hate to be stuck in another city with no friends and family [stressed emoji],” Briana tweeted.

DeJesus later deleted the tweet, but knowing Briana, we’re sure she stands by her words.

She clearly has a great deal of sympathy for Lauren … and exactly none for Javi and Kail.

As you probably recall, Briana dated Javi for a brief period of time shortly after she joined the cat of Teen Mom 2.

While the relationship was not long, it got serious in a hurry, and there was a point at which Javi sopke openly about proposing to Bri.

Clearly, she’s glad they never took the plunge together.

Javi Marroquin: I Did NOT Cheat on Lauren Comeau With Kailyn Lowry! [UPDATED]Start Gallery

It was around this time that the never-ending Briana vs. Kailyn feud heated up.

It was also around this time that Briana alleged that Javi cheated on all of the women in his life, includind Kail, Lauren, and herself.

So Lauren might want to keep Bri in mind, in case she ever needs someone to testify against Javi in a custody hearing.