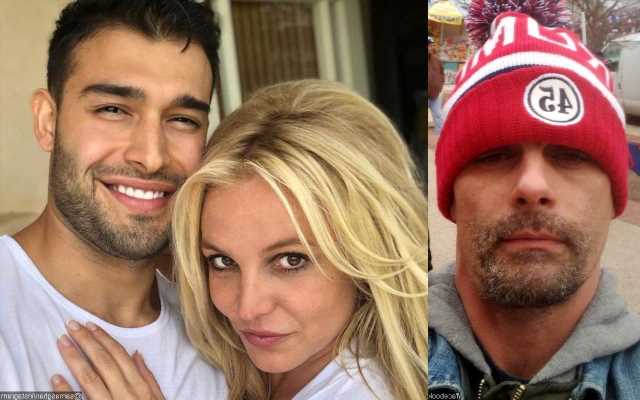 Jason, who was married to the ‘Oops!… I Did It Again’ singer for 55 hours in 2004, doesn’t believe that her engagement to her current longtime boyfriend is real.

AceShowbiz –Britney Spears‘ ex-husband Jason Alexander has spoken up on her engagement to Sam Asghari. In a new interview with Inside Edition, the first husband of the pop star expressed his doubt that her betrothal to her current boyfriend is real.

In a clip of the interview, which aired on Tuesday evening, September 14, the 39-year-old was asked about the pop star’s engagement to her longtime boyfriend. His answer was a little shady as he said, “If it’s real, it’s awesome.”

Asking for confirmation, the interviewer, Jim Moret, asked again, “You don’t think it’s real?” Jason, who was Britney’s childhood friend before they were married for only 55 hours in 2004, responded, “No.”

Jason, however, had nothing but good things to say about Sam. When asked if he thinks Sam is “out for fame or money or love,” he responded, “I’m trying to be as nice as I can,” adding that if Sam wasn’t around, Britney would be going through the hardest time in her life solo. He explained, “He’s really the only person that’s been around for a few years, so without him she would’ve been alone.”

He went on showing his support for Britney and her relationship with Sam, declaring, “I’m always going to love her. If she’s happy with Sam and that’s going to happen, I’m happy for her.”

Jason additionally claimed that he still keeps in touch with Britney and was speaking with the Grammy-winning singer “on the way over here.” On how she’s doing, Jason said, “She’s great. She’s good, she’s mentally stable, she’s fine.”

He, however, refused to get her on the phone mid-interview, saying, “She can’t talk.”

Britney announced her engagement to Sam on Sunday, September 12 by sharing a video of her showing off her diamond ring. “I can’t f**king believe it!!!!!!” she captioned it with several ring emojis.

Sam’s talent manager Brandon Cohen later confirmed the news to Page Six on the same day, revealing New York jeweller Roman Malayev designed the “one-of-a-kind ring.” Brandon said, “The couple made their long-standing relationship official today and are deeply touched by the support, dedication and love expressed to them.”

On Monday, Britney gushed about her new fiance, who is featured in the latest edition of Men’s Health magazine. She wrote, “Words can’t even say how shocked I am … geez although the a**hole was way overdue!!!!” She added, “It was definitely worth the wait …. yes world … that beautiful f**king man in that picture is MINE !!!” The mother of two went on sharing, “I’m so blessed it’s insane!!!!”

Britney was previously also married to Kevin Federline from 2004 until their divorce in 2007. They share two children together, Sean Preston, 15, and Jayden James, 14.