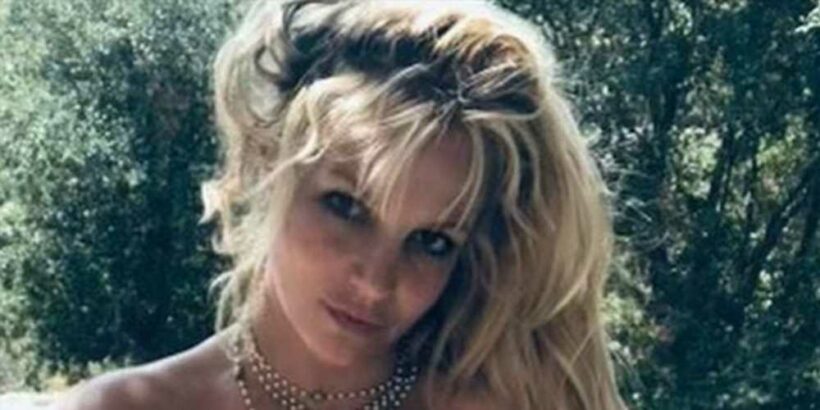 Britney Spears wants you to know that, no, she "did not get a boob job," and those series of topless photos? They're for her to see herself in her "purest form." On Monday, the "Toxic" singer posted a gallery of topless photos, along with a lengthy Instagram caption explaining why she had shared the photos and shutting down haters in the process.

"No guys … I didn't get a boob job in just a week … nor am I pregnant … I have boobs in these pics cause I devoured food 😋 !!!!," Spears wrote alongside the series of photos. She continued explaining why she wanted to share topless photos.

She continued, "In my opinion it's quite twisted the immediate response of when any woman is hot and they want to shed a layer … no … I'm not talking in a strip club or a performance … just on a practical scale of being in your car and realizing you're wearing a stupid long sleeve shirt in the summer !!!! The immediate reaction to any woman who does this after shedding a layer is DAMN I FEEL BETTER … therefore you think you look better !!!"

She went on to explain why she was sharing images of her body now. "It's because I was born into this world naked and I honestly feel like the weight of the world has been on my shoulders and it's made me view myself that way !!!!," she wrote. "I wanted to see myself in a lighter way … naked … like the way I was born and to me looking back at my pictures when I shoot it's insane the psychology in seeing myself in my purest form gives evidence that pain … hurt … tears … and heavy burdens aren't who I am. I am a woman …. a beautiful … sensitive woman who needs to look at myself in my purest form !!!"

But she did add that despite the slew of risqué photos, she won't be posting topless photos for the rest of her life, "cause that would get boring."

She closed out the caption addressing the "Free Britney" movement, and how much it has meant to her — adding that when people commented "Free Britney" on her topless photos, she thought it was "really fucking funny."

"The Free Britney campaign started with all your amazing pink Free Britney shirts 👚 3 years ago !!!," she said. "There's a way deeper meaning to the movement than you can ever imagine … my fans have always been so damn amazing and I love you all 🌹🌹🌹 !!!!"

These very freeing photos come after her father Jamie Spears reportedly finally agreed to step down from the role of conservator.

"Even as Mr. Spears is the unremitting target of unjustified attacks, he does not believe that a public battle with his daughter over his continuing service as her conservator would be in her best interests," the filing read. "So, even though he must contest this unjustified Petition for his removal, Mr. Spears intends to work with the Court and his daughter's new attorney to prepare for an orderly transition to a new conservator."