Multiple documentaries about Britney Spears and her conservatorship are currently out, and it appears as though Britney has watched at least one—and isn’t exactly here for it. Britney hopped on Instagram to respond to the doc, and without getting into specifics, implied that she wasn’t thrilled.

“It’s really crazy guys … I watched a little bit of the last documentary and I must say I scratched my head a couple of times 🙄🤷🏼‍♀️ !!!” she said in the post, which appears to have been deleted and re-shared with slightly different language. “I really try to disassociate myself from the drama !!! Number one … that’s the past !!! Number two … can the dialogue get any classier 🤷🏼‍♀️🤓😭 ??? Number three … wow they used the most beautiful footage of me in the world 😳 !!! What can I say .. the EFFORT on their part 👏🏼🙄 !!!”

Britney went on to talk about Project Rose, which Entertainment Tonight reports is a photo project, and then explained that she’s “wearing WHITE for NEW BEGINNINGS 🤍🤍🤍”

It’s unclear which documentary Britney’s talking about, but FX and Hulu released Controlling Britney Spears on Friday, and on Saturday CNN released Toxic: Britney Spears’ Battle for Freedom. Meanwhile, Britney vs Spears is out as of today on Netflix. Britney’s boyfriend Sam Asghari has expressed concern about the documentaries, which have been made without Britney’s involvement, posting on Insta Stories “I question producers who made them ‘just to shed light’ without input or approval from subject. Any credit for light being shed should go to #FreeBritney.” 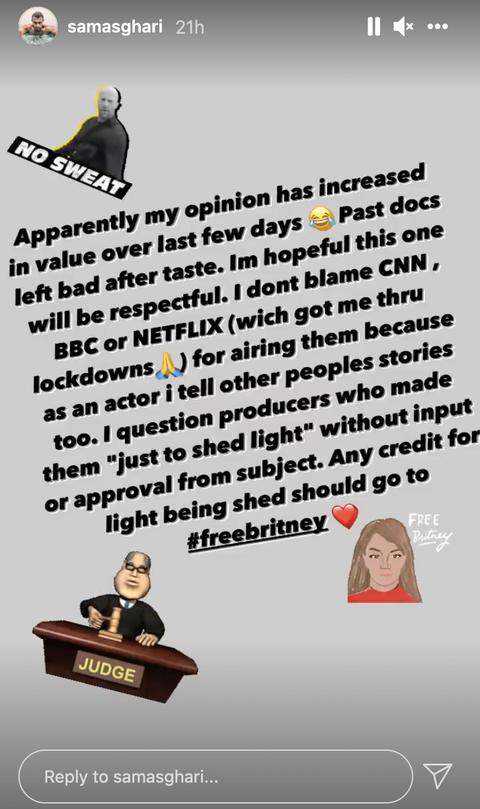 Sam also hit Netflix’s Insta comments, writing “I hope the profit from these docs go toward fighting against injustice #freebritney,” in one post, and dropping a “💯” on a comment from Bobby Campbell, who asked in part, “How much money is being made by third parties from this documentary leveraging Britney’s personal story and its value in the media?” 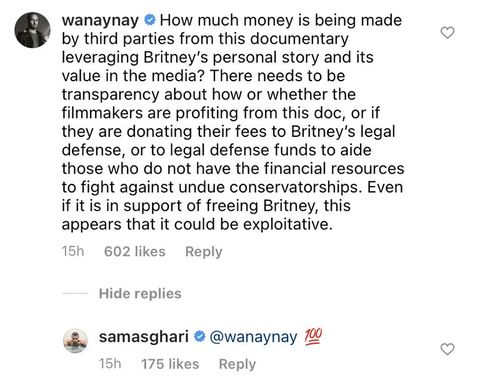