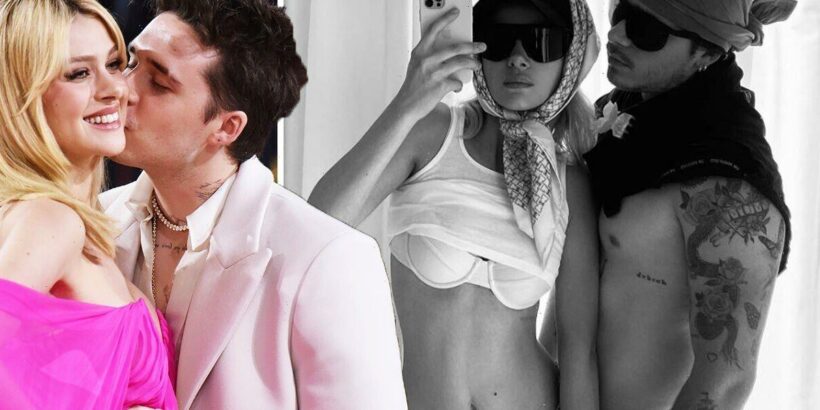 Brooklyn Beckham and Nicola Peltz get married in Miami

Brooklyn Peltz Beckham and his new wife Nicola Anne Peltz have sparked pregnancy rumours after sharing a series of snaps taken ahead of the Met Gala earlier this week. The pictures, which were taken by celebrity photographer Ellen Von Unwerth, comprised of a selection of black and white and coloured shots which showed the loved-up duo cosied up in bed and led fans to speculate over whether they’re expecting.

The most stunning xxxxx

In the first snap, Brooklyn smiled at the camera while Nicola looked startled as she spoke on a phone.

The newlyweds had only the duvet to cover them as they got ready to attend the Met Gala.

The second sultry picture showed Nicola whispering sweet nothings into her beau’s ear as his impressive neck tattoo was revealed.

Nicola was then seen in her hot pink Valentino frock which featured a large cut out panel on the front.

Brandishing a large bouquet of white flowers, the blonde-haired beauty looked less than impressed with the arrangement.

However, it was the final snap that sent the couple’s fans into a frenzy and sparked pregnancy rumours.

It showed Brooklyn tenderly kissing his wife’s cheek as she affectionately caressed his face while they cuddled up in bed.

Nicole flashed her stunning engagement ring as she held the duvet to her chest.

Commenting on the snap, Brooklyn wrote: “The most stunning xxxxx.”

Fuelling pregnancy rumours, Instagram user angelodiazferrer penned: “Just give me them babies,” alongside a series of heart face emojis.

It comes after Brooklyn revealed that he has fatherhood on his mind following an Instagram Q&A last year with fans.

The son of Victoria and David was asked what he wants to be when he grows up.

Brooklyn replied: “An amazing dad and husband”, alongside a red heart emoji.

He had also previously shared his hopes to have a family with Nicole one day after revealing she said yes after he proposed.

The star wrote on Instagram: “”Two weeks ago I asked my soulmate to marry me and she said yes xx

“I am the luckiest man in the world.

“I promise to be the best husband and the best daddy one day️ I love you baby xx.,” he added.

Brooklyn and Nicole married last month in a lavish ceremony at her parents £76million Miami mansion which hosted the glitzy nuptials.

The ceremony was rumoured to have cost a staggering £3million and counted a number of A-list stars attending the event.

Express.co.uk have contacted representatives for Brooklyn Beckham and Nicola Peltz Beckham for comment.