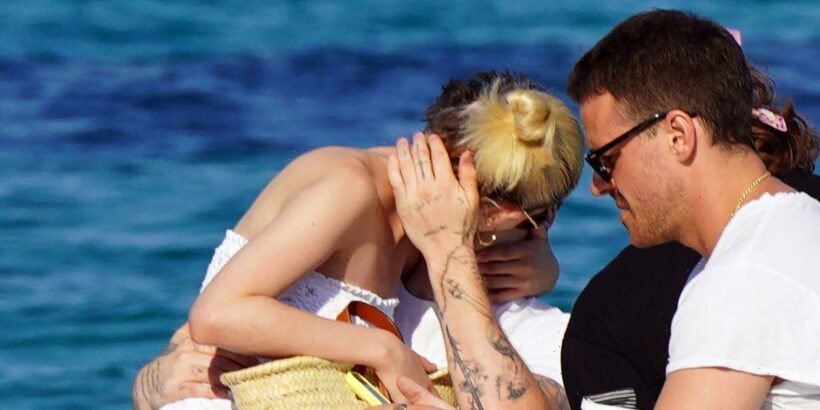 Brooklyn Beckham and Nicola Peltz appeared to be in full wedded bliss still, as they were seen snogging in front of pals in St Tropez on Wednesday.

The newlyweds are currently enjoying a lavish getaway in the south of France following their recent belated honeymoon to Portofino, Italy, and were caught in quite the passionate moment as they were joined by friends on their latest outing.

Brooklyn, 23, and Nicola, 27, were pictured kissing with their arms wrapped around each other on a boat as they were surrounded by a large group, which they were seemingly unbothered by.

The couple had visited swanky restaurant Club 55 earlier, before they were seen leaving the establishment after dinner to head onto the boat, which was waiting near a beach close by.

Brooklyn and Nicola looked particularly cute together as they coordinated in white for the outing, and were seen linking arms as they made their way to the water to begin their boat ride.

Brooklyn cut a casually stylish figure as he wore a white T-shirt, revealing his extensive arm tattoos, a pair of matching wide leg trousers and some light grey Birkenstocks, which he later took off, opting to walk barefoot after the restaurant.

Nicola was elegantly dressed in a white strapless minidress which she paired with matching chunky heeled wedges and accessorised her daytime look with gold hoop earrings and a large straw tote with brown handles.

The actress looked effortlessly stunning as she wore her blonde hair back in a bun and donned a pair of brown tinted sunglasses, matching those worn by her husband.

The newlyweds looked besotted with each other during their boat trip as Nicola sat on Brooklyn’s lap, and continued with their PDA along the water ride.

Brooklyn and Nicola got married in April in an extravagant £3 million ceremony at her family’s £76 million estate in Miami, Florida.

The couple have since been enjoying their time together as husband and wife and have already travelled quite a bit of the world followed their wedding.

It’s hard to believe that, when the loved-up pair first met five years ago, they “didn’t click” initially, as Nicola admitted recently.

Nicola told Tatler magazine: "We didn't get along, we just didn't click… I had a boyfriend, he had a girlfriend.

"We actually met up one time and went to dinner, and he was a friend but not a close friend. Then we ran into each other at a Halloween [in 2019] and I can't tell you what happened but from then on we were inseparable."