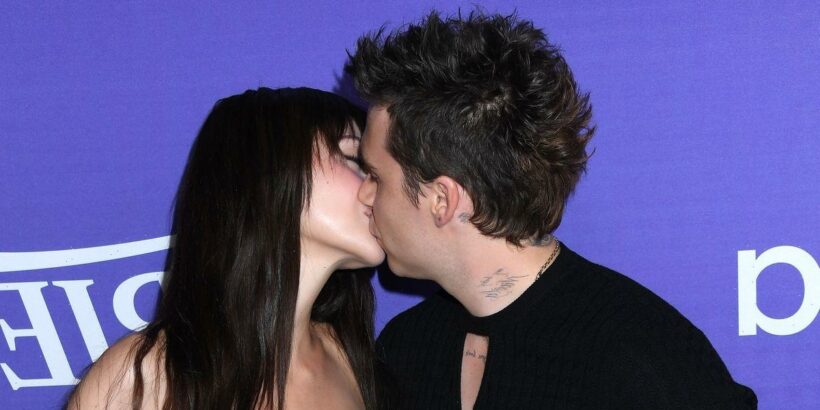 Brooklyn Beckham looked as enamoured as ever with his wife of four months, Nicola Peltz, as the pair stepped out at the Variety Power of Young Hollywood Event in Hollywood on Thursday.

The eldest son of David and Victoria Beckham isn't shy when it comes to waxing lyrical about Nicola, as well as indulging in plenty of PDAs, and Thursday night was no different as he planted kisses on his wife.

Brooklyn, 23, was "honoured" during the evening, receiving his "first ever award", and at one point Nicola, 27, clutched a copy of Variety's Young Hollywood Issue, which had Brooklyn on the cover.

The eldest of the Beckham brood looked suave in a black jumper that had a cut-out detail at the chest, and he teamed it with black trousers and trainers to finish off the look.

Nicola rocked a typically chic look in a houndstooth patterned Fendi look that comprised an asymmetric corset top with a belt that cinched her in at her waist. She also wore matching trousers and added to her height in a pair of her favoured chunky platform shoes.

The actress showed off her newly-dyed dark hair, which is a huge contrast to her signature blonde locks that she's known for, and she wore winged eyeliner to complete the aesthetic.

The couple got together in 2020 and tied the knot in April in a star-studded ceremony at Nicola's family's $76million property in Miami, Florida.

The wedding was attended by the likes of Gordon Ramsay, Eva Longoria, Venus and Serena Williams and, of course, Brooklyn's mega-famous parents, David and Victoria.

There were rumours of a feud between Nicola and Victoria following the wedding, and Brooklyn and Nicola finally addressed it in their interview with Variety.

The actress said that she thinks the rumours began when it was revealed that Victoria didn't design her bridal gown, with the 27 year old opting to wear a dress by Valentino Haute Couture.

"I was going to and I really wanted to, and then a few months down the line, she realised that her atelier couldn't do it, so then I had to pick another dress," Nicola revealed.

Giving an insight into what went down between her and her new mother-in-law and how rumour, she then added: "She didn't say you can't wear it; I didn't say I didn't want to wear it. That's where it started and then they ran with that."

He recently unveiled yet another tattoo, which is the word 'married' emblazoned on his hand. Like many of his inkings, Brooklyn got it in tribute to his wife.

Nicola, in turn, got him some donuts and wrote him a note which read: "I believe in you with every part of my being. You're the love of my life and I am so lucky to spend everyday by your side. I love you more every minute!"