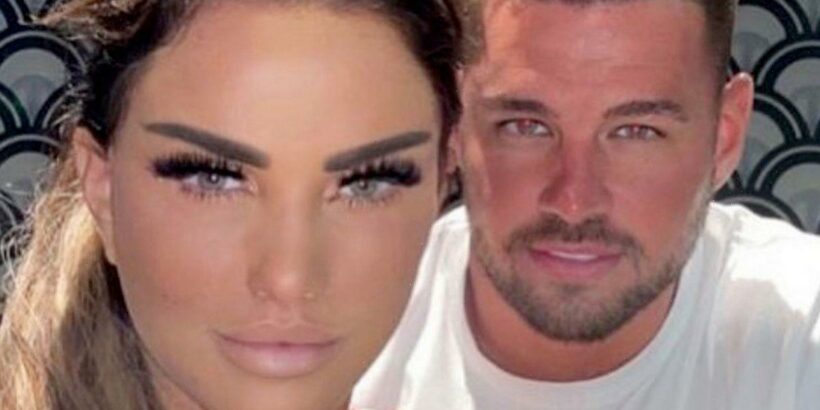 Katie Price's fiancé Carl Woods has posted a snap of her hand and dazzling engagement ring after she entered The Priory last month.

The 32 year old, who reportedly had a 'massive row' with Katie, 43, the night before her car crash on Tuesday 28 September, shared a loved-up clip to his 219,000 Instagram followers as the pair held hands over dinner.

Carl panned the camera as he held Katie's hand while her dazzling engagement ring, which has been valued at £100,000, glittered under the light.

It appeared that the couple were out for dinner as we can spot a white tablecloth and silver cutlery placed over folded napkins.

It comes after the reality star and businesswoman enjoyed a casual day of shopping and running errands as she was seen darting in and out of various shops in South West London on Friday 22 October.

The blonde star also stopped off at a beauty salon and clutched a selection of shopping bags in her right hand, while in her left, she carried an e-cigarette and was seen vaping occasionally.

Katie opted for a pair of hot pink jogging bottoms and a comfy white hoodie for the trip.

The star also went for a natural makeup look for the trip but her tan appeared just as strong and bronzed as before she was admitted into the Priory.

A fellow high street shopper spotted Katie out and about and said they were "surprised" to see her.

The onlooker told The Sun: "I was surprised to see her out and about shopping but she does look well and happy.

"She was vaping at the time and walking between shops browsing, it all looked very relaxed," they added.

A friend of the star also assured that her treatment is going well and Katie is "committed" to see it through.

They claimed that Katie's shopping bags were for her mum Amy's birthday and Katie treated herself to a tan and fresh nails afterwards.

The pal said that things are "much better" for Katie now she's focusing on her mental health and getting better.

"She has had an awful lot to deal with but things are calmer for her and she’s making good progress," they added. "It’s very reassuring for those who love her."

It comes as the former glamour model was banned from driving after she flipped her BMW in a terrifying crash near her home in West Sussex three weeks earlier.

During her court appearance last month, Katie confessed to getting behind the wheel after drinking, as well as already being disqualified from driving and without insurance.

Magistrate and Chair of the bench Julie Hutton handed the star an interim driving ban and agreed to defer her sentencing until December to allow her to attend the Priory Clinic for treatment in South West London.

For all your updates on Katie Price, sign up to OK!'s daily newsletter.